Britain to leave EU on March 29, PM May says as she suffers 2nd defeat on Brexit timetable 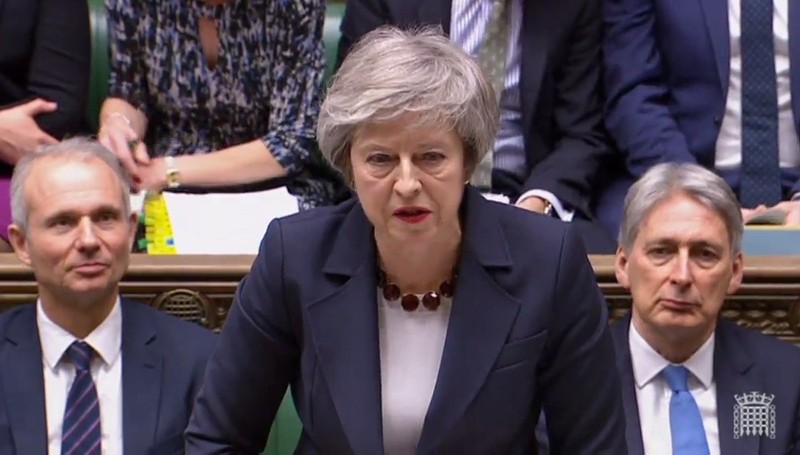 A video grab from footage broadcast by the UK Parliament's Parliamentary Recording Unit (PRU) May as she speaks during the weekly Prime Minister's Questions (PMQs) in the House of Commons in London on January 9, 2019. (AFP Photo)
by Compiled from Wire Services Jan 09, 2019 12:00 am

Britain will leave the European Union on March 29, Prime Minister Theresa May said on Wednesday when asked by a lawmaker to rule out any delay to Brexit.

On Tuesday the Telegraph newspaper cited three unidentified EU sources as saying British officials had been "putting out feelers" and "testing the waters" on an extension of Article 50, which sets out the conditions for leaving the EU.

Meanwhile, May's government suffered another setback as lawmakers voted to force it to announce within three sitting days what steps it will take next if its Brexit deal is rejected by parliament next week as appears likely.

The contentious amendment was passed by 308 votes in favor to 297 against, a day after lawmakers delivered another blow to May by voting to scupper a no-deal Brexit. The change is unlikely to supercede the 21 day time limit in law, but adds political pressure

ay's comments come as the House of Commons opened five days of debate on an agreement with the European Union setting out the terms of Britain's departure from the bloc on March 29.

A vote, initially slated for mid-December, is now scheduled for Tuesday — and the government still looks likely to lose.

May insisted that her agreement was the only one available, and the only way to prevent a disruptive "no-deal" Brexit in just over 10 weeks.

"The only way to avoid no deal is to vote for the deal," May told lawmakers in the House of Commons.

May called off the December vote at the last minute when it became clear that a majority of lawmakers — from the governing Conservatives as well as opposition parties — opposed the deal, a compromise that has left both pro-European and pro-Brexit politicians unhappy.

May promised to seek reassurances from the EU on the most contentious issue, the status of the Northern Ireland-Ireland border. But the bloc refuses to reopen the agreement, and opposition to the negotiated deal remains strong among British lawmakers.

May told lawmakers that "further clarification" from the EU was possible, "and those talks will continue over the next few days."

Jeremy Corbyn, leader of the main opposition Labour Party, said that "not one single dot or comma has changed" since December's aborted vote.

"Isn't the prime minister bringing back exactly the same deal she admitted would be defeated four weeks ago?" he asked.

Labour said it would try to trigger an election by calling for a no-confidence vote in the government if May's deal is defeated next week. There's no guarantee Labour could marshal the majority support in Parliament needed to topple the government — and even if it did, a new election would not automatically stop the Brexit countdown clock.