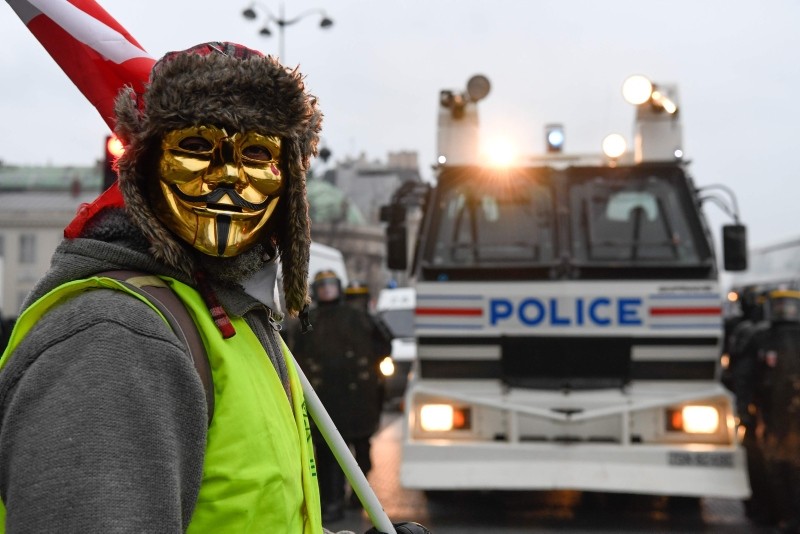 A masked protestor stands in front of a police vehicle in Paris on January 5, 2019, during a rally by yellow vest ,Gilets Jaunes, anti-government protestors. (AFP Photo)
by Daily Sabah with Agencies Jan 26, 2019 3:39 pm

In a move to emulate the 'yellow vest' protest movement that has swept France, groups from opposite sides of the political spectrum prepare to stage demonstrations in London this weekend

Rival demonstrations are planned in Britain this weekend as groups from opposite ends of the political spectrum try to emulate the "yellow vest" protest movement that has recently swept France.

The left-wing "People's Assembly" activist group has invited thousands of people to wear yellow vests at an anti-austerity "Britain is broken" march in central London Saturday. The protesters demand the British government to hold a general election and an end to austerity.

"See you on the streets and don't forget your #YellowVests," the group — which is demanding a general election to end the ruling Conservatives' program of austerity — wrote on its Facebook page.

The event is also hosted by other liberal organizations targeting different causes, including "Stand Up To Racism" which is protesting government policies towards refugees.

Meanwhile right-wing, Brexit-supporting activists have signaled their intent to hold demonstrations in British cities, including the capital, under the banner "#YellowVestUK".

A group sparked a firestorm this week by assailing pro-EU figures in Westminster on Monday, which included chanting "Nazi" at prominent Remain supporting MP Anna Soubry during live TV interviews.

They also then harangued her and political commentators outside parliament, prompting calls for more proactive policing of the activists.

Police have vowed to uphold any public order offenses and intervene when appropriate in response to the controversy.

Britain's lawmakers are split on how to handle Brexit but they agree that the atmosphere in the public spaces outside parliament, often populated with angry demonstrators, has become ugly and intimidating. This increasingly raucous brand of street activism has raised questions about what has happened to British politics in recent years.

On Tuesday, members of Parliament called on police to do more to tackle intimidation of politicians and journalists outside parliament after protesters yelled abuse at a prominent Conservative lawmaker. More than two and a half years since Britain voted by 52 to 48 percent to leave the European Union, the country remains divided.

Demonstrators who back Brexit and others who want to stay in the European Union have become a fixture in the gardens opposite Parliament.

The yellow vest revolt in France over the high cost of living has sparked copycat protests worldwide, having spread from Europe. The yellow vest revolt, driven by high living costs and frustration at President Emmanuel Macron's leadership, shows scant signs of abating after two months of unrest, even after he made some tax and minimum wage concessions. Ahead of a ninth straight weekend of planned protests in Paris and across France, yellow vest protesters have been issuing calls on social media. Protesters hope the move will force the government to listen to their demands, notably their call for more direct democracy through the implementation of popular votes that allow citizens to propose new laws.