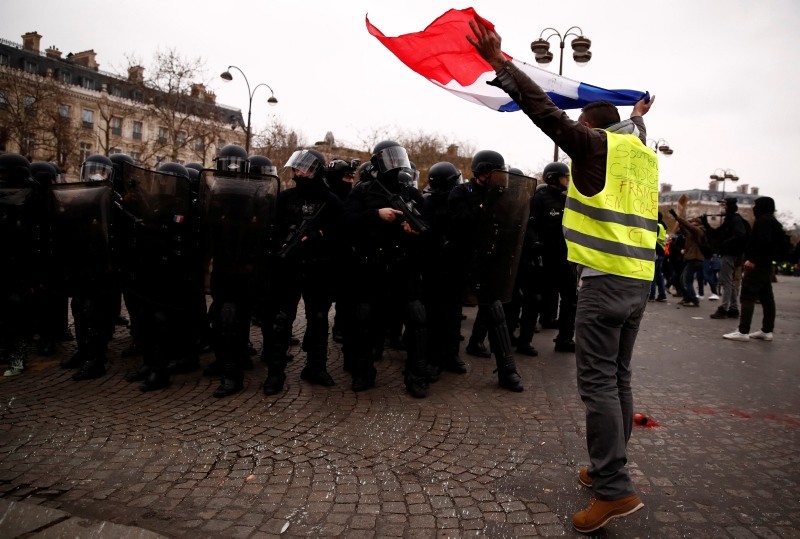 A protester wearing a yellow vest takes part in a demonstration by the ,yellow vests, movement near the Arc de Triomphe in Paris, France, January 12, 2019. (REUTERS Photo)
by Compiled from Wire Services Jan 26, 2019 3:39 pm

At least 102 Yellow Vest protestors were arrested on Saturday in the French capital Paris, where the police officers used tear gas and water cannon on the protestors.

Protesters walked through central Paris from the Finance Ministry in the east to the surroundings of the Arc de Triomphe in the west.

Some scuffles broke out between police and protesters near the monument. Security forces used tear gas to push back some protesters who were throwing rocks and other objects at them.

Police established a car ban on the nearby Champs-Elysees avenue.

Paris police say 40 people were arrested Saturday before and during the protests, primarily for carrying potential weapons.

Meanwhile, more than 1,000 yellow vest protesters, according to local authorities were marching in Bourges, a provincial capital with a renowned Gothic cathedral and picturesque wood-framed houses. Online groups mounted calls over the past week for actions in the town because of its location in the center of France.

The movement waned over the holidays but appears to be resurging, despite Macron's promises of billions of euros in tax relief and an upcoming "national debate" to address demonstrators' concerns. Protesters want deeper changes to France's economy and politics, seen as favoring the rich.

Paris police said they wouldn't let down their guard, and deployed armored vehicles, horses and attack dogs around the city. Subway stations and some shops closed, notably around government buildings and the Champs-Elysees, the sparkling avenue whose luxury boutiques have been hit by repeated rioting in past protests.

Paris police said in a statement they made several arrests before Saturday's actions, notably in France's historic Gypsy or traveler community, which has called for protests in support of a boxer caught on video punching police last weekend in central Paris.

That incident dominated French media over the past week and prompted fears of resurgent tensions between protesters and police. Boxer Christophe Dettinger turned himself in to police and is in custody pending trial.

Other protests are planned in several French cities Saturday, but many actions aren't officially declared in advance and pop up in unexpected places. Last Saturday, authorities estimated 50,000 people protested nationwide, including 3,500 in Paris.

The protests started with drivers opposing fuel tax increases, which is why participants wear the fluorescent vests French motorists must keep in their vehicles. But it has mushroomed into a broad-based revolt against years of shrinking purchasing power and Macron's pro-business policies.

Some yellow vest groups hope to translate that into votes in the European elections in May.