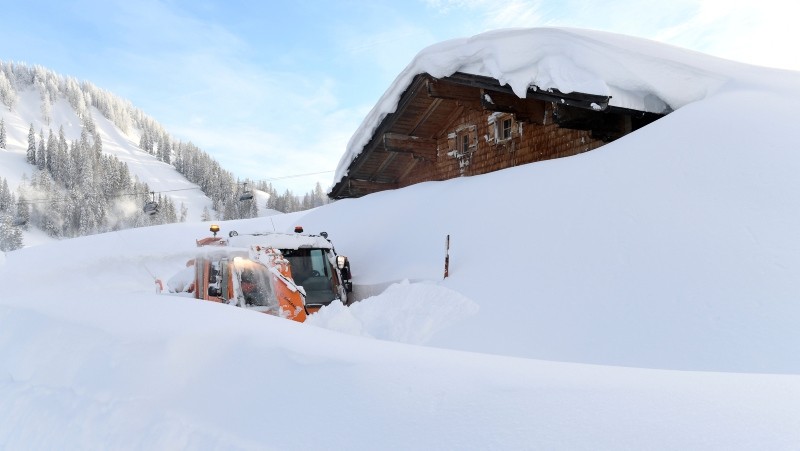 Some parts of the European continent are facing the heaviest snowfall of last two decades, paralyzing daily life while harsh winter conditions left nine dead in Australia and three in Germany.

A 54-year-old woman died Thursday after waiting hours in a car which got stuck in a convoy on the highway due to heavy snowfall in Bavaria in Germany's south while a nine-year-old boy in the Aying district in Munich died after being trapped under a toppled tree on the same day, local police said.

Several railway lines in the Alps were closed because of the snow, and schools were closed in parts of Bavaria.

The German Armed Forces announced that some 350 soldiers started to serve in order to open roads and clear snow on the roofs.

The heavy weather has caused at least nine deaths in Austria. Berchtesgaden, near the Austrian border of Germany, was declared a disaster area after the snow reached two meters. Military units were mobilized so that relief supplies could be delivered to places that were disconnected from the outside world.

Austrian public broadcaster ORF previously reported that the weather was expected to calm on Friday but further heavy snow could be expected on Sunday.

The heavy conditions have been continuing for the last week. In the Czech Republic, around 9,000 households were without electricity on Thursday after heavy snow in regions bordering Germany and Austria.

On Norway's Arctic Svalbard islands, more than 100 people were evacuated as a precaution because of a storm and the risk of avalanches. The Svalbard archipelago is 800 kilometers (500 miles) north of Norway's mainland.

Norwegian news agency NTB said 29 dwellings at the foot of the Sukkertoppen mountain were evacuated, and a school, kindergartens, a sports facility and public library closed. In the north of mainland Norway, authorities warned of a risk of avalanches.