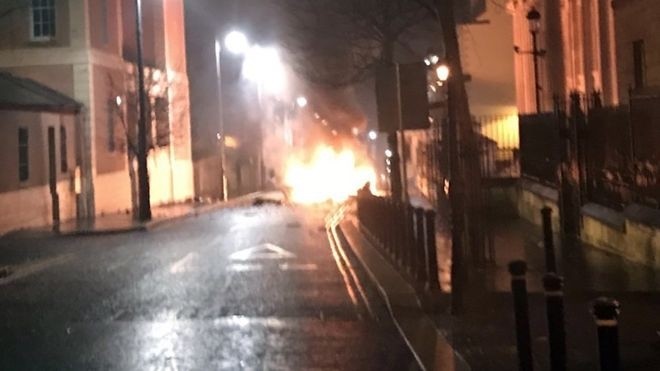 A suspected car bomb exploded in the Northern Irish city of Londonderry on Saturday, police said, with leading politicians alleging the blast was terror-related.

The Police Service of Northern Ireland tweeted a photograph of the scene outside a courthouse as it warned that evacuations were taking place due to a second suspect vehicle in the British province's second city.

"Police are in attendance at the scene of an incident in Derry/Londonderry city centre," the PSNI tweeted.

"We would ask for patience and co-operation of the public and the business community as we carry out our initial investigations."

The force added on Facebook: "As far as we know no one injured. There is another car we are not happy about. There are ongoing necessary evacuations," it posted.

Politicians from all sides on the island of Ireland condemned the incident.

Former Northern Irish first minister Arlene Foster, who heads the province's Democratic Unionist Party, referred to it as a "pointless act of terror", while the Republic of Ireland's foreign minister Simon Coveney called it a "car bomb terrorist attack".

The three decades of sectarian bloodshed in Northern Ireland, known as the Troubles, were largely brought to an end under the 1998 Good Friday peace accords. Car bomb attacks were responsible for some of the worst atrocities.

Foster, who leads the pro-British DUP, said: "This pointless act of terror must be condemned in the strongest terms. Only hurts the people of the city.

"Perpetrated by people with no regard for life."

She said the swift actions of the emergency services had helped ensure there were no fatalities or injuries.

"There is no place and no justification possible for such acts of terror, which seek to drag Northern Ireland back to violence and conflict."

Elisha McCallion, the local member of the British parliament from the Irish republican party Sinn Fein, condemned the bomb attack.

"This incident has shocked the local community," she said in a statement.

"Thankfully, no one appears to have been injured.

"Derry is a city moving forward and no one wants this type of incident."