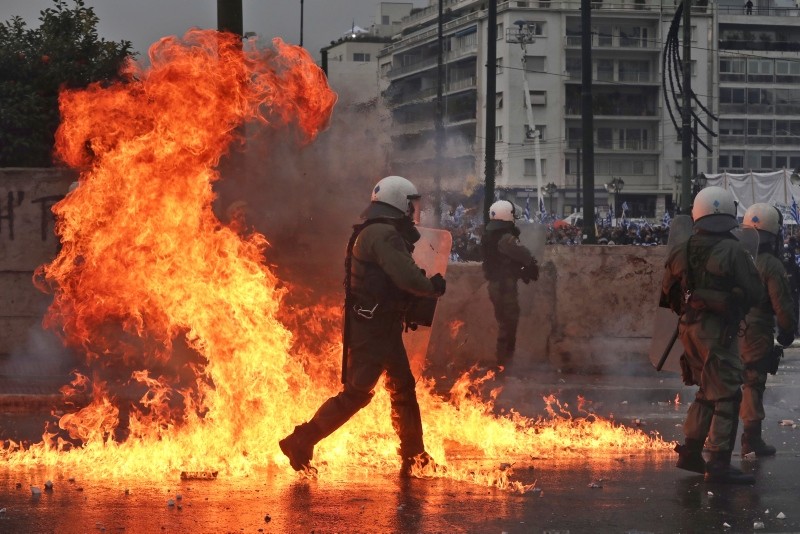 Protesters clashed with police outside Greece's parliament during a rally that drew tens of thousands of people Sunday against the Greek-Macedonia name deal.

Demonstrators threw rocks, flares, firebombs, paint and other objects at riot police who responded with tear gas. Some protesters jumped over a fence and tried to scale the steps, but officers chased them back down. One man draped in a Greek flag attacked police with a large stick, while others swung big flags on wooden poles and struck officers.

Parliament is expected to start a debate Monday on ratifying the deal and vote on it by Friday. Macedonia's parliament has already approved it, agreeing that the country would go by the name North Macedonia.

Macedonia and Greece struck the deal in June to end a decades-long dispute over Macedonia's name, which Greece says harbors territorial claims on its northern province of the same name.

Protesters are against the deal because they believe that any use of the name Macedonia in the neighboring country's name is a usurpation of ancient Greek heritage and implies territorial claims on Greece.

Organizers of Sunday's protest in Athens said they hoped to attract more than 600,000 people. Police estimated a crowd size of 60,000.

But indications were that the actual number will fall well short. While organizers had said about 3,000 buses would travel from northern Greece, police said that only about 300 had arrived Sunday afternoon. Crowds were still trickling in as the protest went on.

Among the people who addressed the protest were former conservative Prime Minister Antonis Samaras, a member of the Mount Athos monastic community and a Greek-American former politician, Chris Spirou, once a member of New Hampshire's House of Representatives.

In northern Greece, farmers have blocked the highway leading to the Macedonian border in solidarity.