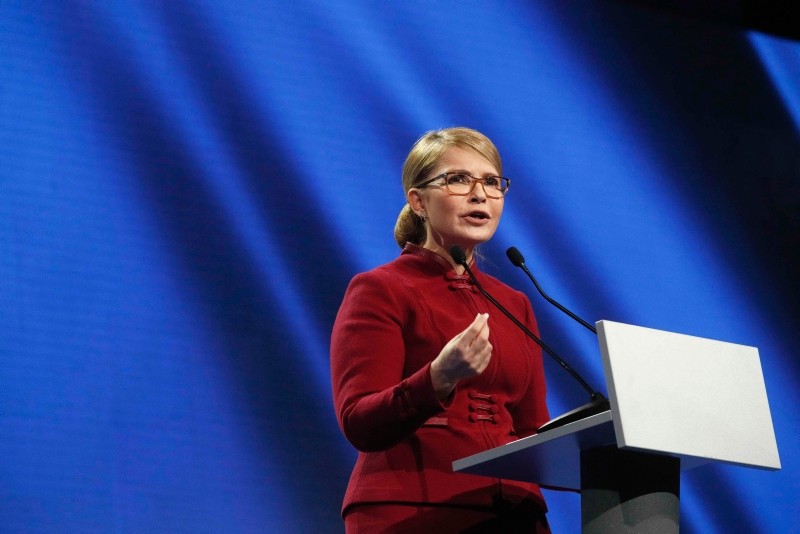 Former Ukrainian Prime Minister Yulia Tymoshenko on Tuesday officially launched her bid for the presidency, with polls showing her as the frontrunner for the country's top political post.

Tymoshenko has been a leading figure on the Ukrainian political scene for the last two decades, coming to international prominence through her role in the 2004 Orange Revolution.

"I'm running for the presidency," she told a session of her nationalist Batkivshchyna (Fatherland) party to cheers from the crowd.

The 58-year-old, who is a highly divisive figure in Ukrainian politics, admitted at the glossy event that she had "made mistakes" in her political career, which has seen her become premier twice and also serve time in jail.

"Today we are entering a new era -- an era of success, of happiness, of enlightenment... today we begin Ukraine's journey towards real and powerful greatness."

Tymoshenko is favorite to win the March 31 vote according to the latest polls, but no candidate yet has an unassailable lead.

The 58-year-old has 16 percent support going into the two-round election, according to surveys, ahead of incumbent President Petro Poroshenko with 14 percent.

In third place is Volodymyr Zelensky, a comedian who once played the country's president in a TV show but has promised to refresh Ukraine's political system.

Tymoshenko, long recognizable by her braided hair heaped atop her head in traditional style, served as prime minister twice under her protest co-leader Viktor Yushchenko.

But her fortunes changed after she lost the 2010 presidential election to pro-Russia Viktor Yanukovych.

The following year she faced a string of criminal investigations and was sentenced to seven years in jail, in which she served three.

She was released in 2014 -- the day that pro-Europe, anti-corruption protests led to Yanukovych's ouster.

Tymoshenko contested that year's presidential election but came a distant second to Poroshenko, who had served in her cabinet.

Supporters say she has the iron will and anti-Kremlin credentials needed to lead Ukraine but detractors accuse her of corruption and say she may have ties to Russian President Vladimir Putin.

Poroshenko, a 53-year-old chocolate tycoon, promised to pivot the ex-Soviet country of nearly 45 million people towards the West and has sought to push through ambitious reforms.

But critics say the economy is in tatters, corruption is rampant and Poroshenko has done little to rein in fellow oligarchs.

After the 2014 uprising, Moscow annexed Crimea and supported Russian-speaking separatists in Ukraine's east, in a conflict that has claimed the lives of more than 10,000 people.

The war has been a huge burden for the country's struggling economy, with Poroshenko forced to rely on assistance from the West.

In December the International Monetary Fund confirmed it would give Kiev a $4 billion, 14-month loan.

Poroshenko is widely expected to stand for re-election even though he has not yet confirmed he is running.

His low popularity ratings got a boost after he oversaw the creation of a Ukrainian Orthodox Church independent of Moscow.

His standing also increased after Russia seized three of Kiev's navy vessels and two dozen sailors as they tried to pass from the Black Sea to the Sea of Azov in November.

Putin accused Poroshenko of provoking the naval crisis in a bid to increase his popularity ahead of the vote.