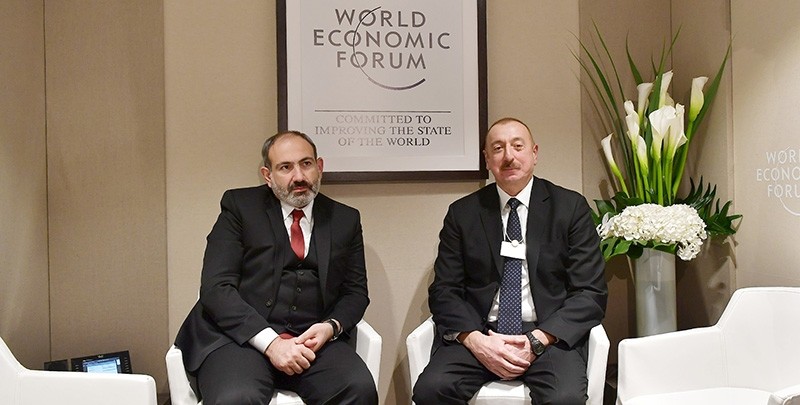 The neighboring leaders reportedly discussed the current situation surrounding the resolution process of the Nagorno-Karabakh conflict.

The discussion follows a meeting on the same issue between the two countries' foreign ministers in Paris last week, which was mediated by Organization for Security and Co-operation in Europe (OSCE) and U.S. officials, according to the Azerbaijani foreign ministry.

Karabakh, a disputed territory between Azerbaijan and Armenia, is recognized as Azerbaijani territory by the international community. It was taken over by Armenian secessionists during the break up of the Soviet Union in 1991 with military support from neighboring Armenia, and a peace process has yet to be implemented.

The conflict between 1992 and 1994 led to the deaths of tens of thousands of civilians and soldiers on both sides, in addition to displacing hundreds of thousands of people, mainly Azerbaijanis. Some 20 percent of Azerbaijan's territory remains occupied.

Three U.N. Security Council resolutions (853, 874 and 884) and U.N. General Assembly resolutions 19/13 and 57/298 refer to Karabakh as being part of Azerbaijan. The Parliamentary Assembly of the Council of Europe refers to the region as being occupied by Armenian forces.

The Armenian occupation of Upper Karabakh led to the closing of the frontier with Turkey, which sides with Baku in the drawn-out dispute.

Political ties between Ankara and Yerevan remain frozen owing to the Karabakh conflict as well as the legacy of killings during World War I, which the Armenian diaspora and government describe as "genocide" – a description that Turkey refutes.

While newly-appointed Prime Minister Pashinian has expressed readiness "to establish direct relationships with Turkey without any precondition," President Recep Tayyip Erdoğan has maintained solving the Karabakh problem as an "absolute precondition" for improving ties.