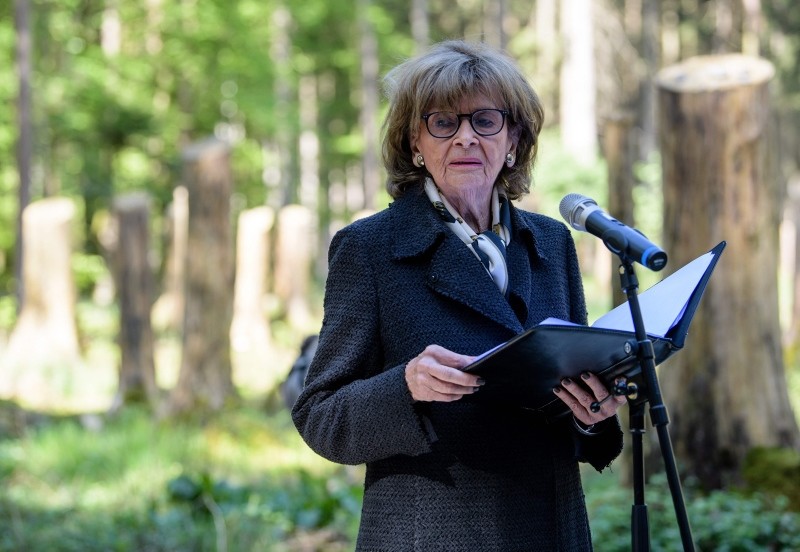 This April 27, 2018, photo shows Charlotte Knobloch, president of the Jewish Community Munich, giving a speech during a ceremony to inaugurate a memorial site at the former Muehldorfer Hart concentration camp near Waldkraiburg, Germany. (AFP Photo)
by Compiled from Wire Services Jan 25, 2019 12:28 am

A Jewish community leader in Germany said Thursday she had been targeted with threats and hate mail "almost by the minute" since criticizing the far-right Alternative for Germany (AfD) party.

Speaking in the Bavarian parliament Wednesday ahead of observance of International Holocaust Remembrance Day, Charlotte Knobloch said Alternative for Germany "has downplayed the crimes of the Nazis and has close connections to the extreme right," calling the party a threat to democracy.

A day later, Knobloch, 86, told a local newspaper that "since then, I have received coarse verbal abuse, threats and insults by email and telephone almost by the minute."

"The danger the party and its supporters spell for our liberal democracy has become more than clear and this shows more than ever that the democrats in our country must stand united against them," she told the Augsburger Allgemeine newspaper.

Knobloch, a former leader of the Central Council of Jews in Germany, now heads the community in the Bavarian city of Munich.

She added that she "had expected the AfD to use the Bavarian state parliament for self-promotion — I just hadn't expected a row of such proportions."

The five-year-old AfD, the country's biggest opposition party, opposes multiculturalism, Islam and the immigration policies of Chancellor Angela Merkel, whom it labels a "traitor."

One of its most radical figures, Bjoern Hoecke, has sparked outrage with statements on Germany's Nazi past, calling Berlin's Holocaust monument a "memorial of shame" and urging a "180-degree shift" in the country's culture of remembrance.

Last week, the country's domestic intelligence agency said it was putting the AfD under increased observation amid concerns it was flirting with extremism.

The domestic intelligence service BfV said it would be examining public comments by AfD members and its links to extremist groups, but stopped short of putting the party as a whole under covert surveillance.

BfV's chief added that the party's youth section and a party faction linked to a prominent leader in eastern Germany, Bjoern Hoecke, would be scrutinized even more closely because there was sufficient evidence to indicate they could be classified as "extremist organizations."

AfD has said it is exploring legal action against the BfV.