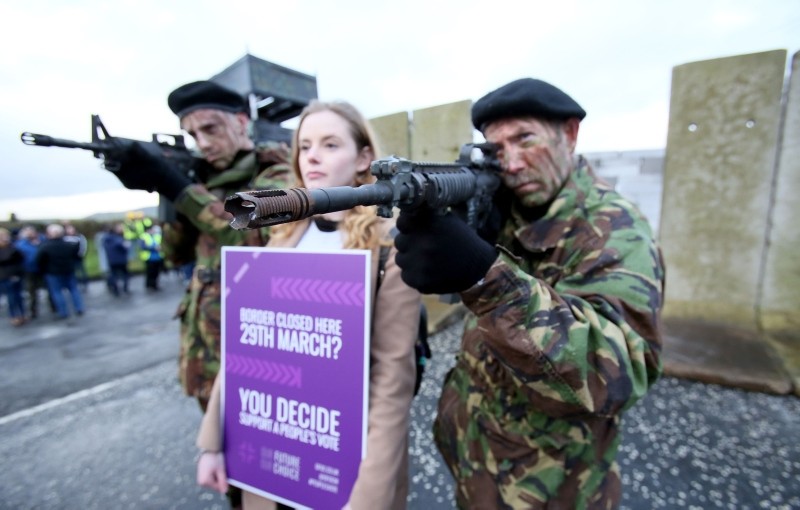 Members of the anti-Brexit campaign group ,Border communities against Brexit,, dressed as British Army Soldiers, pose with a wall installed on a road crossing the border between Northern Ireland and Ireland. (AFP Photo)
by Anadolu Agency Feb 13, 2019 12:31 am
Two former police chiefs of Northern Ireland have warned about a new wave of terror arguing that dissident republicans aim to exploit any Brexit-related chaos.

Speaking to Belfast Telegraph, former Assistant Chief Constable Alan McQuillan said some are "hitching themselves to the Brexit bandwagon" to stoke trouble.

Former PSNI chief Hugh Orde also warned that "dissident republicans would view a hard border as an opportunity to mount further attacks," according to the Belfast Telegraph.

The warnings followed reports that British intelligence service MI5 has stationed more than 700 officers in Belfast as part of an intelligence operation to combat the growing threat and mainly the New IRA group.

McQuillan underlined that the hardliners remain a threat despite the sustained security push by police and intelligence services.

"The reality is they are always dangerous and they will use fears over a hard border to try and ramp up their activities," he said.

"The dissidents are hitching themselves to the Brexit bandwagon."

"I think there will be further attacks, I think they remain dangerous," he warned.

"But I don't think they'll succeed," he added.

McQuillan said: "They're destroying the lives of Derry [Londonderry] people. Let's be honest, it's not damaging people in Dublin or London."

He described the New IRA as "utterly, utterly reckless".

Formed in 2012 by a merger of the Real IRA, which carried out the 1998 Omagh bombing, splinter groups and individuals, the New IRA is thought to be behind the last week's attack.

A car bomb had killed 29 people, including a pregnant woman with twins, and injured more than 200 others in Omagh, Northern Ireland in August 1998 in the deadliest attack in The Troubles era.

Londonderry — known as Derry by its majority Irish nationalist population — is a city known for its violent past due to sectarian violence, known as The Troubles.

The town was the scene of an infamous massacre in January 1972 when members of Britain's elite Parachute Regiment shot 27 unarmed people in a civil rights protest. Fourteen of the victims later died.

The killings hastened Northern Ireland's descent into conflict between the British government and pro-British paramilitaries on one side and Irish republicans and nationalists on the other and the city remained as a scene of terrorist acts until 1998.

The IRA and the Ulster Defence Association (UDA) were two armed groups which terrorized Northern Ireland's Catholic and Protestant communities by launching attacks during The Troubles.

The 1998 Belfast Agreement-a peace deal dubbed the Good Friday agreement — largely saw the end of Troubles-era violence in which more than 3,500 people lost their lives.

The border between Northern Ireland and the Irish Republic has been one of the thorniest issues in Brexit negotiations between the U.K. and the EU.

A deal reached by British Prime Minister Theresa May and EU officials had a backstop clause-a U.K.-wide arrangement that would keep the country in line with the EU customs in a bid to avoid the return of hard border-however, the deal was rejected by the House of Commons in a vote held on Jan. 15.

The border at the moment is invisible, and people, goods and services can travel through it freely. But as the U.K. leaves the EU without a deal, the border, technically, will need some sort of checks.

Due to the sensitive nature of the region and because free passage is one of the crucial articles of the 1998 Belfast Agreement, the U.K., EU, Northern Ireland and Ireland all reject the idea of returning to a hard border where checkpoints and customs buildings will need to be installed.

However, based on the recent political developments in Westminster, Ireland, the U.K. and the EU are reviewing contingency plans for a scenario that would introduce a hard border in the region.

Northern Ireland voted to remain in the EU in 2016 referendum, and it is feared that the Brexit process could trigger enmities in the region.

The U.K. will leave the EU on March 29, 2019, unless British lawmakers alter this date in a vote.