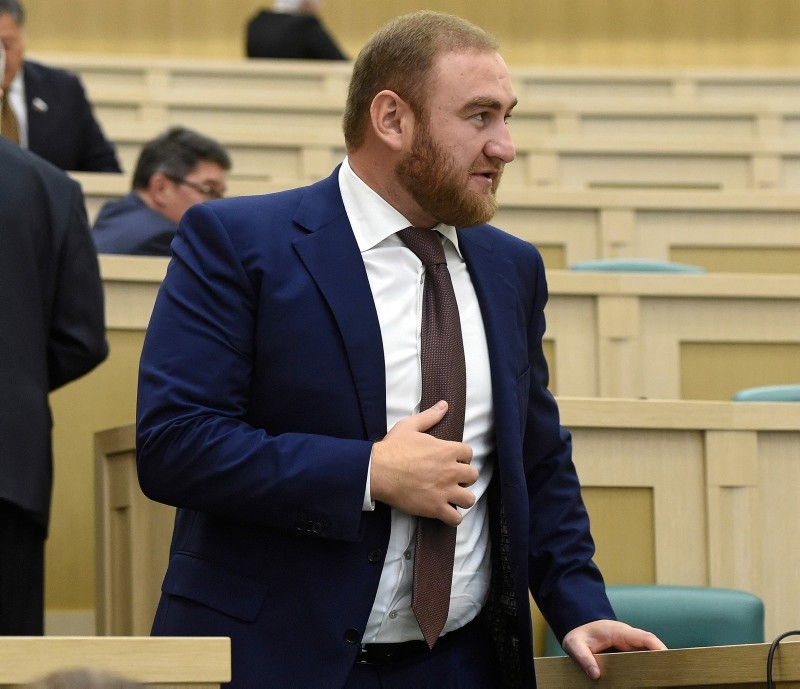 In this photo taken on Wednesday, Sept. 28, 2016, Rauf Arashukov, who represents the Karachaevo-Cherkessiya region in the North Caucasus, stands at the Federation Council, in Moscow, Russia. (Dmitry Dukhanin/Kommersant Photo via AP)
by reuters
Feb 13, 2019 12:31 am

A Russian lawmaker was arrested on Wednesday during a session of the upper house of parliament and was led away to face questions over two murders after failing in a bid to flee the chamber.

Russia's senior prosecutor attended the plenary session and unexpectedly made the case for the arrest of 32-year-old Rauf Arashukov. The lawmaker tried to leave when his colleagues abruptly voted to strip him of his parliamentary immunity, the house speaker said.

Arashukov was later shown in footage published by the Investigative Committee being led in handcuffs by security officers to a detention facility from a van.

The Investigative Committee said Arashukov was being questioned as a suspect in the murders of a local youth activist and an adviser to the head of the southern Russian region of Karachaevo-Cherkessiya.

Arashukov denies the accusations, his lawyer was quoted by RIA news agency as saying.

Investigators said Arashukov, who represents the minority Russian Karachaevo-Cherkessiya region in the upper house, was having difficulties with the Russian language and had asked for an interpreter.

Recounting the detention afterwards, Federation Council Speaker Valentina Matvienko said Arashukov had tried to get away during the session, but that she had told him to stay.

"He tried to get up and leave the session. I told him to stay put because according to current regulations he had the right to speak and explain himself," she said.