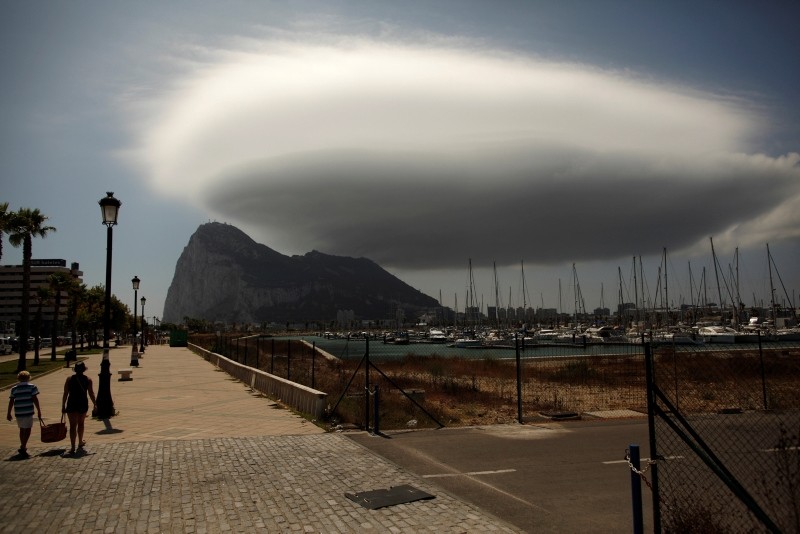 People walk along a street in front of the Rock of the British territory of Gibraltar (rear), a monolithic limestone promontory, next to the border in La Linea de la Concepcion, southern Spain Aug. 9, 2013. (Reuters Photo)
by Compiled from Wire Services Feb 13, 2019 12:31 am

Britain complained about the European Union calling Gibraltar a "colony" in a piece of draft legislation on Friday, highlighting how the EU is lining up behind Spain in its territorial dispute as Britain quits the bloc.

The 27 remaining member states agreed to offer Britons visa-free travel to the EU's borderless Schengen area after Brexit in March, even if talks on a broader withdrawal treaty collapse, on condition that Britain offers the same terms to EU citizens visiting for up to 90 days, according to the European Council's document.

But diplomats said Britain's ambassador to the EU Sir Tom Barrow had objected to the wording of the text; it placed the 33,000 people of Gibraltar in a different category from U.K. citizens -- with the same travel rights -- and it also spelled out Spain's claim to sovereignty over "The Rock" at the United Nations.

In particular, it stated in a starred footnote: "Gibraltar is a colony of the British Crown."

"There is a controversy between Spain and the United Kingdom concerning the sovereignty over Gibraltar, a territory for which a solution has to be reached in light of the relevant resolutions and decisions of the General Assembly of the United Nations."

Prime Minister Theresa May's spokesman insisted Gibraltar was not a "colony." The port at the mouth of the Mediterranean, ceded to Britain by Spain in the Treaty of Utrecht in 1713 after a war, was a "crown colony" when Britain joined the European bloc in 1973 but London reclassified it as a "British overseas territory" in 2002. The seven square-kilometer peninsula is an internally self-governing British overseas territory and shares a 1.2-kilometer fenced border with Spain.

"It is completely unacceptable to describe Gibraltar in this way," May's spokesman told reporters.

"Gibraltar is a full part of the U.K. family and this will not change due to our exit from the EU," he said.

The wording has, however, been used in other EU texts. Finding in Britain's favor against Spain in a case in 2006, the European Court of Justice stated: "Gibraltar is currently a British Crown Colony. It does not form part of the United Kingdom."

Spain's claim to sovereignty makes use of U.N. rules on decolonization. Those, among other things, limit the weight given to the preferences of people living in a territory; Gibraltarians favor remaining British, despite having voted overwhelming against Brexit in the 2016 referendum.

In a 2002 referendum on whether Britain and Spain should share sovereignty over Gibraltar, 99 percent of voters said no, similar to the outcome of a referendum in 1967. In the 2016 referendum on Britain's EU membership, Gibraltar had the highest pro-Remain vote, at 96 percent.

Spain imposed a blockade on the region from 1968 until 1985 - a year before it joined the EU - cutting off access to the land border and communication for Gibraltarians.

The text agreed by the 27 governments will be discussed by the European Parliament and the EU executive in order to finalize a regulation giving Britons visa-free access.

Recalling how EU policy on Gibraltar had so far largely favored Britain, which joined the bloc before Spain, a senior EU official told Reuters recently: "Now the table has turned.

Spain has already secured a right of veto over whether future Brexit arrangements can apply to Gibraltar. Prime Minister Pedro Sanchez held up an agreement on the current withdrawal treaty in November over the issue and said Spain would seek joint sovereignty after Britain leaves the EU.

Spanish sources said this week that Madrid would insist on excluding Gibraltar from all agreements between Britain and the EU once Britain has left.

There is, however, concern among other EU members that Madrid's hard line could disrupt efforts to ease Britain out of the bloc. EU diplomats point to the territorial issue as one of those that could fray the unity the 27 have shown in negotiations up to now.

The draft divorce deal between London and Brussels -- rejected by British MPs -- sought to defuse any future tensions over Gibraltar when Britain leaves the EU on March 29.

The deal provides for Spanish-British cooperation on citizens' rights, tobacco and other products, environment, police and customs matters.

It sets the basis for administrative cooperation for achieving full transparency in tax matters, fighting fraud, smuggling and money laundering.