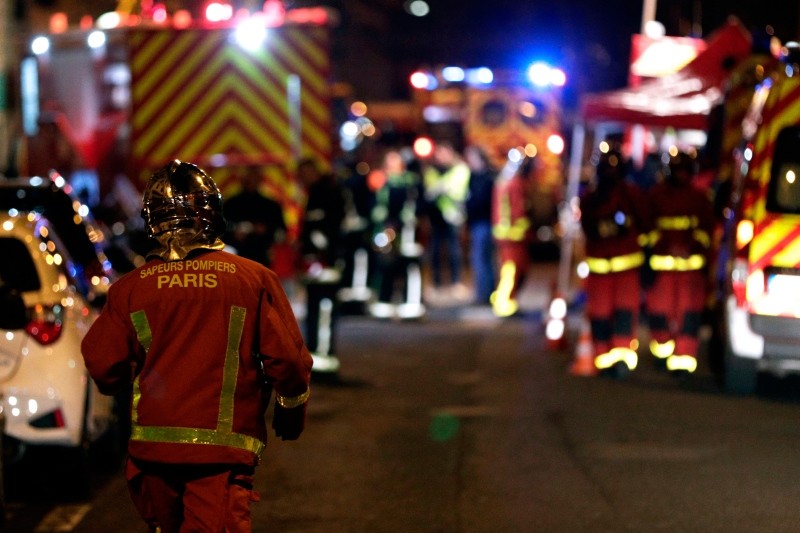 A fire in a Paris apartment building killed at least 10 people and injured around 30 in the early hours of Tuesday, authorities said.

A 40-year-old female resident was detained at the scene as police opened an investigation into voluntary arson resulting in death.

French Interior Minister Christophe Castaner, who spoke at the scene Tuesday morning, said the woman was known to have had mental health issues.

"I want to salute the huge mobilization of the Paris firefighters," he said. "More than 250 people arrived immediately and, throughout the night, saved over 50 people in truly exceptional conditions."

Firefighters rescued some from the roof as well as others who had clambered out of windows to escape the flames. Among the injured were at least six firefighters.

Castaner said the blaze that started on the second floor, had been extinguished and that 36 people were being treated for "relatively" light injuries.

"The situation was already dramatic when the firefighters arrived," Cognon said.

Emergency workers are also seeking to shore up the building that was badly damaged after flames shot out of windows stretching across the upper floors, in images of the operation released by the fire service.

Prosecutor Remy Heitz told reporters at the scene that authorities suspect it was a criminal act.

"I heard a woman screaming in the street, crying and screaming for help," said witness Jacqueline Ravier, who lives across the street. She saw a young man blackened by smoke and a woman motionless on the ground. She said flames were shooting out for hours from the top of the building and smoke-covered victims were fleeing.

She said shaken residents were brought to her building and the one next door while firefighters continued to fight the flames.

"We feel the smoke," she said. "What's surprising is how long it lasted."

The building is on Rue Erlanger in the 16th arrondissement, one of the most high-end and calmest districts of Paris. It is close to the popular Bois de Boulogne park and about 1 kilometer (less than a mile) from the Roland Garros stadium that hosts the French Open tennis tournament and near the Parc de Princes stadium that's home to Paris Saint-Germain, the country's top soccer team.

More than 200 firefighters and emergency workers were involved in the operation, Paris police said, and the street was blocked off. Neighboring buildings were also evacuated.

With landmarks including the Trocadero overlooking the Eiffel Tower, Paris Saint-Germain's home stadium the Parc des Princes, the picturesque Bois de Bologne and an array of upmarket shops and restaurants, the area is popular with tourists.

The incident comes less than a month after a gas blast in central Paris killed four people.