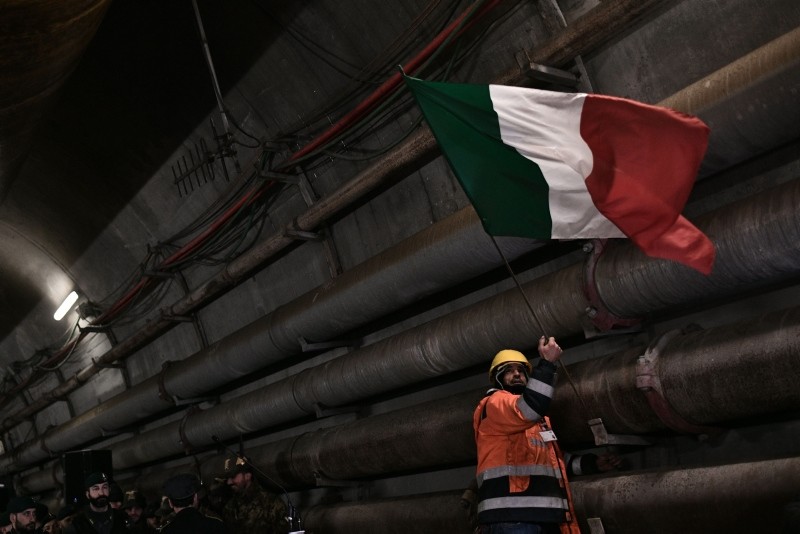 A worker puts up the Italian national flag during a visit of Italyu2019s Interior Minister and deputy Prime Minister Matteo Salvini to the building site of a high-speed train line between Italy and France, Feb. 1, 2019 in Chiomonte, Italy. (AFP Photo)
by Compiled from Wire Services Feb 07, 2019 12:00 am

France has recalled its ambassador in Rome after what Paris described as baseless and repeated attacks from Italy's political leaders in past months, and urged Italy to return to a more friendly stance.

"France has been, for several months, the target of repeated, baseless attacks and outrageous statements," France's Foreign Ministry said in a statement.

It said Italy's attacks were without precedent since World War II.

"Having disagreements is one thing, but manipulating the relationship for electoral aims is another," it added.

"All of these actions are creating a serious situation which is raising questions about the Italian government's intentions towards France."

"This new provocation is unacceptable between neighbouring countries and partners at the heart of the European Union," a ministry spokesman said in a statement a day after Di Maio met the protesters on French soil.

"Mr Di Maio, who has governmental responsibilities, should ensure that he does not impair with its repeated interferences our bilateral relations, in the interest of both France and Italy," the spokesman said.

Di Maio announced Tuesday that he had met near Paris with yellow vest leader Christophe Chalencon and candidates on a "yellow vest" list for European Parliament elections in May, led by Ingrid Levavasseur.

He invited them and other yellow vests to a follow-up meeting in Rome, claiming on Twitter that "the wind of change has crossed the Alps."

Tensions have flared between the two countries since the Five Star Movement and far-right League party came to power in a coalition in Italy last June.