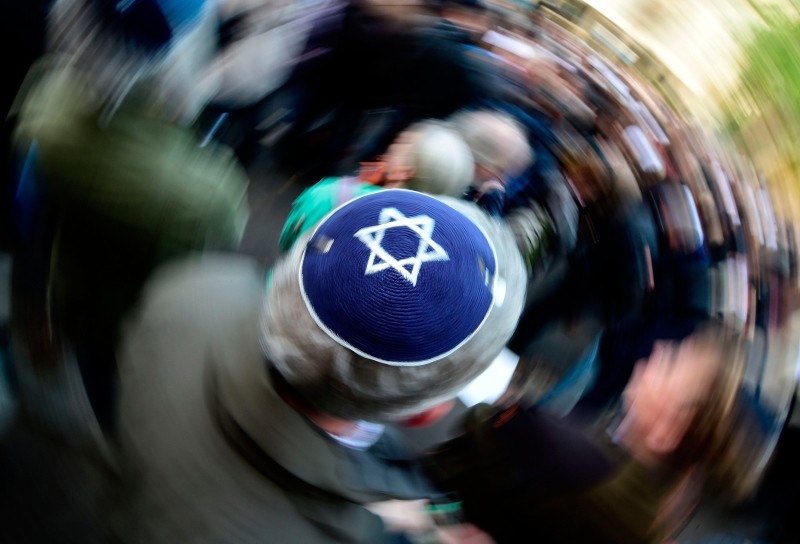 In this file photo taken on April 25, 2018 in Berlin a participant of the ,Berlin wears kippa, rally wears a kippa, organized after a spate of shocking anti-Semitic assaults. (AFP Photo)
by Compiled from Wire Services Feb 13, 2019 12:00 am

As France reeled from an increase in anti-Semitic crimes, neighboring Germany also announced a rise in crimes against the Jewish community in 2018.

The number of anti-Semitic crimes increased from 1,504 in 2017 to 1,646 in 2018, an annual rise of 10 percent. The number of cases considered violent increased from 37 to 62 over the same period up more than 60 percent, crime statistics showed Wednesday.

The figures were given by the German government in response to a request by the opposition far-left Die Linke (The Left) party, as reported in Wednesday's edition of the Berlin-based Tagesspiegel daily.

In the 62 violent anti-Semitic incidents, 43 people were injured.

Earlier answers from the government also revealed that most of the perpetrators came from extremist right-wing groups.

The number of crimes could still increase as the figures have yet to be finalized by the 16 federal states.

"The fight against anti-Semitism at the European level should become a priority of the German European Council presidency in the coming year," Germany's commissioner for combatting anti-Semitism, Felix Klein, told dpa.

Germany is set to take on the rotating EU presidency in the second half of 2020.

Josef Schuster, the head of the Central Council of Jews in Germany, called the figures "alarming," saying that a "stronger commitment" from police, the political class and the judiciary was required to combat the rise.

Chancellor Angela Merkel's spokeswoman Ulrike Demmer says the government's position "is fully clear — that anti-Semitism has no place in Germany."

But Central Council of Jews president, Josef Schuster, called for a "stronger commitment" from police, politicians and the judiciary.

"The latest numbers are not yet official but they reflect a trend, and that's alarming," he said. "What Jews had already felt subjectively has been confirmed by the statistics."

The increase in Germany and France makes it clear that "European strategies to combat anti-Semitism" are needed, said Klein.

Among other things, he called for an EU directive that makes it possible to better combat hatred on the internet.

As an example, he cited the German Network Enforcement Act, which requires internet platforms erase obvious criminal content within 24 hours and within a week in less clear cases.

Germany, like other western countries, has watched with alarm as anti-Semitic and other racist hate speech and violence have increased in recent years as the political climate has coarsened and grown more polarized.

A mass influx of mostly Muslim refugees and migrants to Germany from 2015 drove the rise of the far-right and anti-immigration Alternative for Germany (AfD) party, which since late 2017 is the biggest opposition group in parliament.

Leading AfD members, aside from railing against Islam and multiculturalism, have also made comments that play down the Holocaust.

Party co-leader Alexander Gauland described Nazi Germany's industrial-scale murder of Jews and other minorities as a mere "speck of bird poo in over 1,000 years of successful German history".

Another leading AfD politician, Bjoern Hoecke, has criticized the sprawling Holocaust memorial in Berlin as a "monument of shame."

Schuster, and other Jewish community leaders have accused the AfD of fomenting hate against refugees, Muslims and Jews.

At the same time, Germany has also witnessed a rise in anti-Semitic attacks committed by migrants from Arab states.

In one prominent case last year a 19-year-old Syrian man was convicted for assault after lashing out with his belt at an Israeli man wearing a Jewish kippa skullcap while shouting "yahudi", Jew in Arabic.

A video of the street assault, filmed by the victim on his smartphone, had sparked widespread public revulsion as it spread on social media, and triggered street rallies in solidarity with Jews.

News of the belt attack coincided with another public outcry, over a rap duo who made light of Nazi death camp prisoners but went on to win the music industry's sales-based Echo award, which was subsequently axed.

Days after the belt assault, some 2,000 people rallied at a "Berlin Wears Kippa" solidarity demonstration, matched by smaller events in several other German cities.

Most anti-Semitic offences were however committed by far-right perpetrators, according to the statistics.

Die Linke lawmaker Petra Pau in her statement charged that "we are seeing that militant right-wing extremists can openly call for the desecration of Jewish institutions and attacks against Jewish people."

A rising number of people and groups in the "grey zone between conservatism and right-wing extremism are denying the Holocaust and engaging in anti-Semitic agitation," she said.