UK PM May suffers another loss in Brexit amendments vote 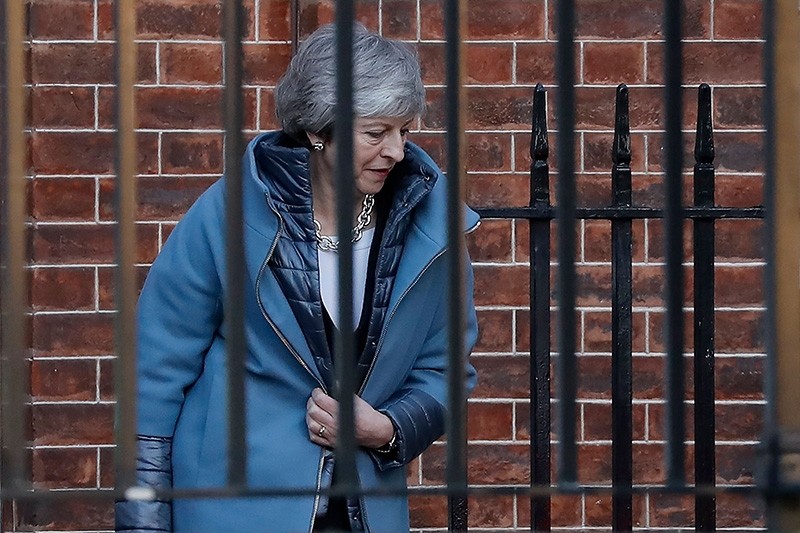 Britain's Prime Minister Theresa May leaves from the rear of 10 Downing Street in London on February 14, 2019 ahead of a vote on amendments to the Brexit withdrawal bill. (AFP Photo)
by Compiled from Wire Services Feb 14, 2019 9:33 pm

British Prime Minister Theresa May was defeated in a symbolic vote in parliament on her Brexit strategy on Thursday, undermining her negotiating strength in talks with the European Union to secure changes to the agreement.

Lawmakers voted by 303 to 258 to reject a motion asking them to reaffirm support for May's plan to seek changes to her Brexit deal. Many pro-Brexit members of her Conservative Party planned to abstain on the vote as they feared she was softening her position on a no-deal departure.

The defeat is symbolic rather than binding stresses how weak her hand is as she tries to secure changes to her divorce deal from the EU in order to win backing for it in Parliament.

May is struggling with little sign of success to win backing for her deal from both pro-Brexit and pro-EU lawmakers in Parliament, which rejected the agreement by a whopping 230 votes last month.

Opposition leader Jeremy Corbyn said the defeat "shows there is no majority for the PM's course of action in dealing with Brexit."

"She cannot keep on just running down the clock and hoping that something will turn up that will save her day and save her face," he said of May, who was not in parliament for the defeat.

Leading Brexiteer Liam Fox earlier warned colleagues that defeat would raise doubts about whether a renegotiated deal could get through parliament, making the EU less likely to make an offer.

"Our European partners will be watching our debate and listening today to see if they get the impression that if they were to make those concessions parliament would definitely deliver," trade minister Fox told BBC Radio 4.

"There's a danger that we send the wrong signals."

Shadow Brexit secretary Keir Starmer accused May of deliberately wasting time to ramp up pressure to pass her deal, and warned that MPs would not let her leave without a deal.

"As for the Prime Minister, taking us out of the EU on the 29th of March of this year without a deal -- we'll see about that.

"I think the majority in this House will do everything they can to prevent that," he added.

May's initial deal was roundly rejected by British MPs last month, but later parliamentary votes suggested a slim majority for her deal if she could get rid of the backstop clause.

The provision is intended to keep the border with Ireland free-flowing but some fear it could leave Britain trapped in EU trade rules indefinitely with no withdrawal mechanism.

British officials have since held a series of meeting with EU counterparts, who have ruled out reopening negotiations.

"The talks are at a crucial stage. We now all need to hold our nerve to get the changes this house requires and deliver Brexit on time," May told lawmakers on Tuesday.

"Having secured an agreement with the EU for further talks, we now need some time to complete that process," she said.

The announcement was seen by political commentators as an attempt to stave off the threat of parliamentary rebellion, with MPs now having to wait until Feb. 27 for another series of votes on what to do if no agreement is reached.

Business leaders and economists have warned of shockwaves around the continent if no transition deal is in place when Britain leaves the EU.