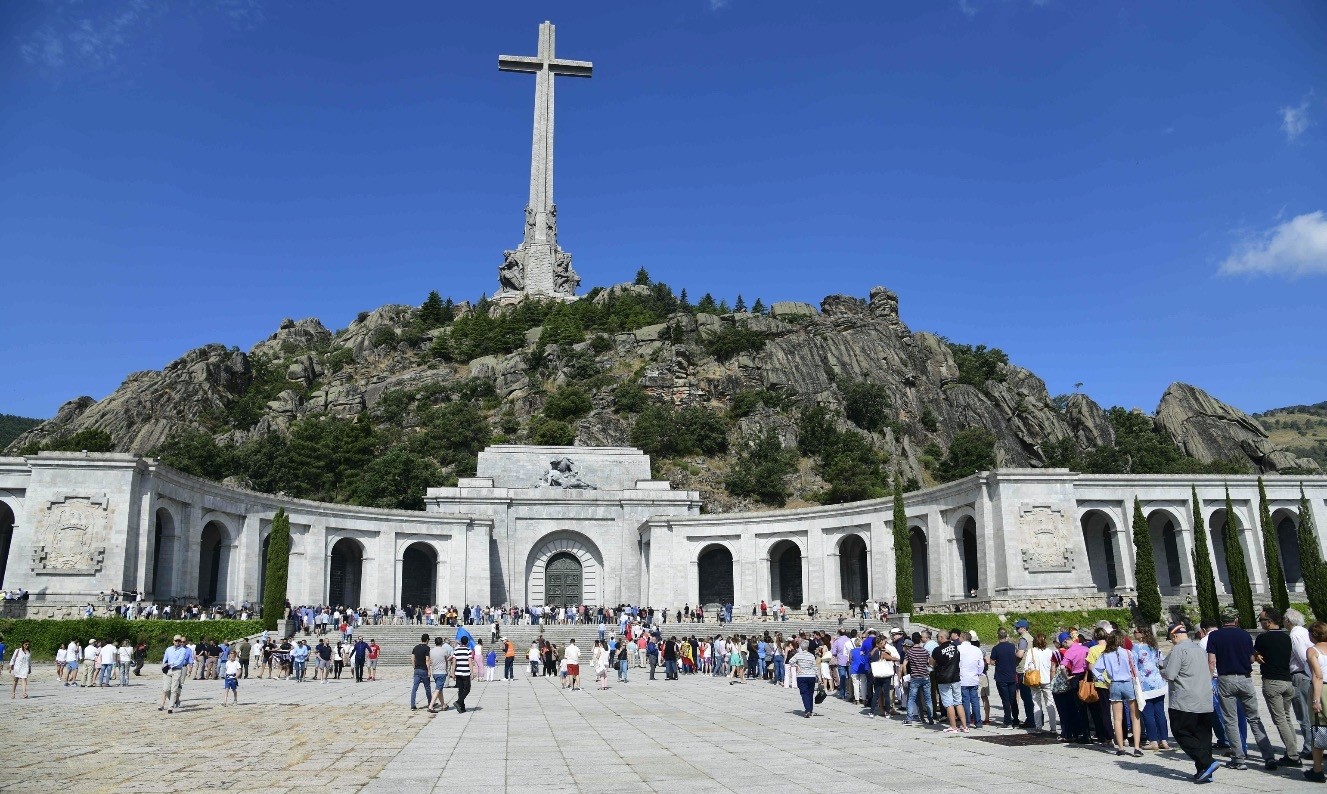 Visitors wait to enter the basilica where Francisco Franco is buried among thousands of Civil War dead of both sides at the Valley of the Fallen in San Lorenzo del Escorial, July 15, 2018.
by Daily Sabah with Wires Feb 18, 2019 12:02 am

As the Spanish government battles to retain power in the face of Vox's nationalists gaining seats in the parliament, it also faces backlash for a decision to remove Franco's remains from his mausoleum

Nationalist lawmakers are set to be elected to Spain's Parliament for the first time in nearly four decades, two opinion polls showed on Saturday, forecasting that no single party would get a majority in a snap election on April 28.

Spain's Socialists, who were in power since June with a minority government, are set to gain more seats than any other party but fall well short of a majority, the surveys showed.

Prime Minister Pedro Sanchez called the early election on Friday after Catalan pro-independence parties who had previously backed him joined opposition parties in defeating his 2019 budget bill this week.

The far-right party Vox would win up to 46 seats out of 350, according to a GESOP poll published by El Periodico newspaper, while the GAD3 polling firm for La Vanguardia newspaper forecast 16 seats.

Vox is a newcomer on the Spanish political scene and pollsters had underestimated its score in a regional election in Andalusia in December, where the anti-immigration party won 12 seats.

The polls show a fragmented political landscape in which the political identity of the next government is yet unclear.

Sanchez's Socialist Party would win 115-117 seats in the election, according to the GESOP poll. The conservative Popular Party would get 75-77 seats.

With such an outcome, one of the two main parties would need the support of at least another party to secure a majority.

The center-right Ciudadanos would win 44-47 seats, in a tight race with Vox to be the third-largest party.

The polls are the first published since elections were called.

Memories of the dictatorship of Francisco Franco, who died in 1975, meant Spain had long been immune to the growing popularity of far-right parties in much of Europe; however the Spanish nation remains divided on its opinion regarding the long-gone caudillo, who ruled the country from 1939 till his death.

The Spanish Civil War saw Spain tear itself apart between 1936 and 1939 as communists and nationalists were battling it out in the fields and streets alike. It was also a war which saw heavy foreign involvement, with volunteer forces and equipment coming from the Soviet Union, the German Reich, the Kingdom of Italy, Portugal, France and even Mexico.

While Spain was not involved in the world war that followed the conclusion of its civil war, it left the nation with a deep chasm which can still be observed today. While some European societies, such as Germany, have come to collectively renounce their former dictators, matters remain more complicated in places such as Italy, Greece and Spain in particular.

While Franco might have passed away in 1975, the democracy that followed his reign is still affected by it today.

The latest example of the past interfering with the present, and ultimately the future, has been the Spanish government's demand that the leader's remains be removed from his mausoleum at the Valle de los Caídos, a move which has been met with, unsurprisingly, both great attention and great anger.

While Madrid has been paving the way for such a move since over half a year, aiming to achieve its goal before the upcoming April snap elections, as the deadline draws nearer, so does resistance to the idea increase, by not just Franco sympathizers, but also those who fear that it might lead to false historical revisionism as well as forgetting the country's past by sweeping its most prominent 20th century figurehead under the carpet.

Similar actions that lead to the taking down of statues depicting American Civil War figures from the confederate side, such as Gen. Robert E. Lee, were met with anger and protests by not just the more fringe elements of American society, such as nationalists, Confederate sympathizers and "alt-right" supporters, but also concerned historians, who once again protested that history cannot be forgotten on demand, invoking Carl Becker, who in 1931 proclaimed that "History is what the present chooses to remember about the past."