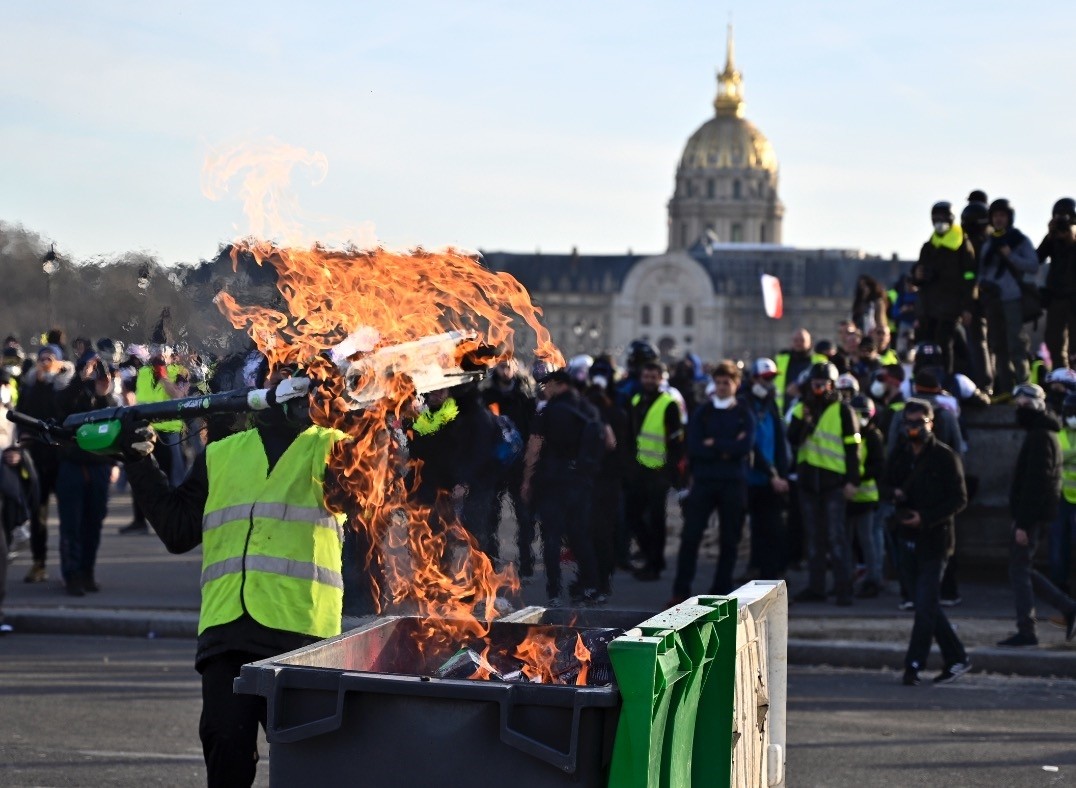 Police Saturday fired tear gas and brought in water cannons and a horse brigade to disperse several thousand "yellow vest" protesters massed near a Paris landmark at the end of a march through the French capital, in the 14th straight weekend of demonstrations. Anti-Semitic remarks hurled by a few at a noted philosopher on the protesters' route were the bitter finale to a day of tension. The embattled President Emmanuel Macron was quick to condemn the anti-Jewish remarks made by protesters as both himself and French media attempt to paint the yellow vests with the broad brush of racism.Acrid clouds of tear gas filled the esplanade of Les Invalides monument, obscuring the gold dome that crowns the monument housing Napoleon's tomb.

In Rouen, in Normandy, a car blocked by demonstrators pushed through the crowd, slightly injuring four people, the all-news channel BFMTV reported. Police used tear gas and water cannon in Bordeaux, a stronghold of the yellow vest movement, and other cities on the 14th straight Saturday of protests. Another demonstration in the capital was planned for Sunday to mark three months since the movement held its first nationwide protests Nov. 17.

In Paris, an array of insults, some anti-Semitic, by a handful of yellow vest protesters targeted a well-known French philosopher, Alain Finkielkraut.

President Macron tweeted that "the anti-Semitic injuries he received are the absolute negation of what we are and of what makes us a great nation." The president's was among a chorus of tweets, with Interior Minister Christophe Castaner denouncing "the surge of pure hate," while government spokesman Benjamin Griveau tweeted that "the ugly beast lurks in the anonymity of the crowd."

The insults included words like "Zionist!" and "Go back to Tel Aviv!" and "We are France!" Finkielkraut once showed sympathy for the movement but criticized it in a recent interview with Le Figaro daily. Some yellow vest protesters have expressed what have been deemed as racist or anti-Jewish views online.

Lines of riot police used tear gas and an impressive backup, a special horse brigade and water cannons – apparently not used – to force the agitated crowd to disperse.

The Paris prosecutor's office said 15 people were detained for questioning, far less than the scores detained in earlier, larger demonstrations that degenerated into scattered rioting and destruction.

Violence has marked most of the protests that started against fuel taxes and grew into a mass movement against Macron and his pro-business policies as well as the French political establishment at large. French media quoted the Interior Ministry as saying that 41,500 protesters nationwide turned out Saturday, some 10,000 less than the previous week, with 5,000 in Paris.

"No social peace without equitable sharing... The people aren't a milk cow," was the message scrawled on a wooden cross, carried by a protester dressed in monk's garb.

In Paris, tensions mounted as the more than four-hour march ended at the Invalides, with projectiles thrown at police, some by masked individuals dressed in black, a uniform for the ultra-leftist anarchist Black Blocs. BFM showed people running after moving police cars, hitting the windows.

The march – one of seven yellow vest demonstrations in Paris on Saturday – began hours earlier at the Arc de Triomphe at the top of the Champs-Élysées, the stage of past rioting, and wound through Paris, from moneyed Right Bank streets with high-fashion boutiques to Left Bank student quarters.

Many French are asking aloud how long the yellow vest movement will keep up its protests, which drain security forces and have dented the French economy.

Emilie Bidois, from the Normandy town of Gisors, who was taking part in the Paris protest, admitted she was growing tired, but remaining determined.

Leo Peyrade, a 70-year-old Parisian, referred to the violence that has hit numerous protests, often triggered by small extremist groups, and said he has learned to be careful. Last week, a young protester lost four fingers from a grenade. Others have lost eyes.

"Every time I come, some are wounded, arms, legs; I'm careful," he said. "I can't run like a young person, not as fast in any event."