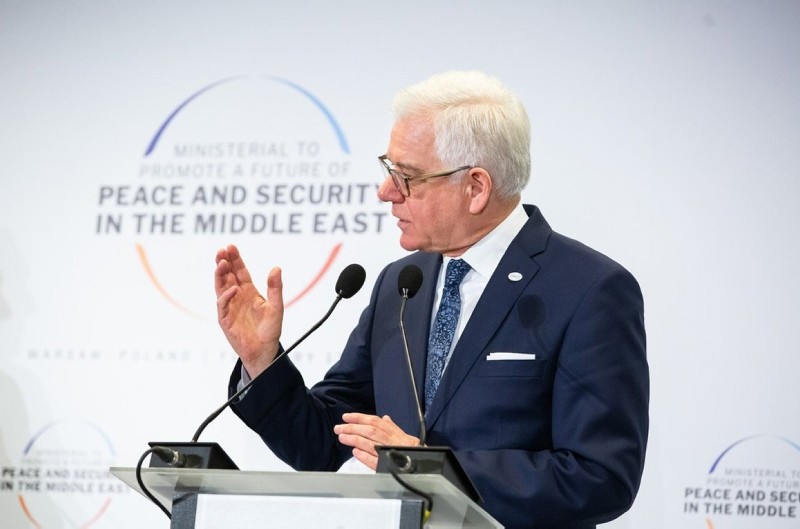 Poland on Monday pulled out of a summit in Jerusalem, triggering the collapse of the entire meeting, after the acting Israeli foreign minister said that Poles "collaborated with the Nazis" and "sucked anti-Semitism with their mothers' milk.

The developments mark a new low in a bitter conflict between Poland and Israel over how to remember and characterize Polish actions toward Jews during the German occupation of Poland in World War II and the Holocaust.

Israeli Prime Minister Benjamin Netanyahu had been due to meet with the leaders of four Central European nations known as the Visegrad group. With the Hungarian and Slovak prime ministers already in Israel and the Czech leader still planning to go, bilateral meetings were to go ahead instead.

Netanyahu had touted the meeting as an important step in his outreach to the countries of Central Europe, which have pro-Israeli governments that he is counting on to counter the criticism Israel typically faces in international forums.

Israeli Prime Minister Benjamin Netanyahu had been due to meet with the leaders of four Central European nations known as the Visegrad group. With the Hungarian and Slovak prime ministers already in Israel and the Czech leader still planning to go, bilateral meetings were to go ahead instead.

Netanyahu had touted the meeting as an important step in his outreach to the countries of Central Europe, which have pro-Israeli governments that he is counting on to counter the criticism Israel typically faces in international forums.

Polish Prime Minister Mateusz Morawiecki had already announced Sunday that he was pulling out of the meeting after a comment by Netanyahu last week about Polish cooperation with Nazis.

Foreign Minister Jacek Czaputowicz was initially tapped to go in Morawiecki's place. On Monday, Michal Dworczyk, the head Morawiecki's office, said Czaputowicz's attendance is now in doubt over comments made by Katz

Katz made his remarks Sunday in an interview on Reshet 13 TV.

Katz previously told i24News over the weekend that "there were many Poles who collaborated with the Nazis. ... No one will tell us how to express ourselves or how to remember our fallen."

Jewish leaders in Poland issued a statement saying that Shamir's words were "unjust already when they were first said, in 1989, when Polish-Israeli relations were just beginning to be rebuilt, after the long night of communism."

"They are even more unjust today, 30 years later, when so much has been done on both sides for a mutual understanding of our very difficult, but shared history," the statement added.

Poland was the first country invaded and occupied by Adolf Hitler's regime and never had a collaborationist government. Members of Poland's resistance and government-in-exile struggled to warn the world about the mass killing of Jews, and thousands of Poles risked their lives to help Jews.

However, Holocaust researchers have collected ample evidence of Polish villagers who murdered Jews fleeing the Nazis, or Polish blackmailers who preyed on helpless Jews for financial gain.

The head of the American Jewish Committee, David Harris, noted that that Poland and Israel, while otherwise friends, have clashed over the "varying assessments of the magnitude of anti-Semitism in Poland, especially before and during World War II, and often competing historical narratives."

He issued a statement acknowledging that "there are certainly pockets of anti-Semitism in Poland" but largely stressing the fact that Poles suffered and put up massive resistance to the Nazis during the war, also helping Jews. He also noted the Polish contributions in recent years to the renewal of Jewish life.

"As friends, we need to be able to manage our inevitable differences. That begins with choosing our words carefully — knowing when to speak, how to speak, and where to speak," Harris said. "It means not allowing individual incidents to escalate out of control. And it means not ceding all the progress achieved to date to those who might wish to destroy it."

Warsaw has long been at pains to state that Poland, which was occupied by Nazi Germany, could not have and did not collaborate in the Holocaust although individual Poles gave up Jews to the Nazis. The Israeli prime minister's office said Friday that Netanyahu had not implicated all Poles in the Holocaust. It insisted that Netanyahu was "misquoted" in Haaretz and other publications that reported different versions of the quote. The clarification came hours after the Polish foreign ministry had summoned Azari over the remarks, the second time Warsaw has taken such action in a matter of days.

The crisis was sparked last week when Netanyahu told reporters during Munich Security Conference in Warsaw that "Poles cooperated with the Nazis." The seemingly innocuous comment infuriated his Polish hosts, who reject suggestions that their country collaborated with Hitler. The Warsaw summit on the Middle East was co-hosted by Poland and the U.S., which focused on isolating Iran while building Arab-Israeli ties.

The summit has also reflected particularly the role of Central Europe played in the American foreign policy under President Donald Trump administration. The recent developments showed that the four Visegrad Group countries hope to strengthen their ties with Washington while the U.S., bypassing the Paris-Berlin axis, seeks greater influence in the region on issues where the key European powers strongly oppose Trump's policies.