Britain has until March 15 at latest to seal Brexit deal, EU warns 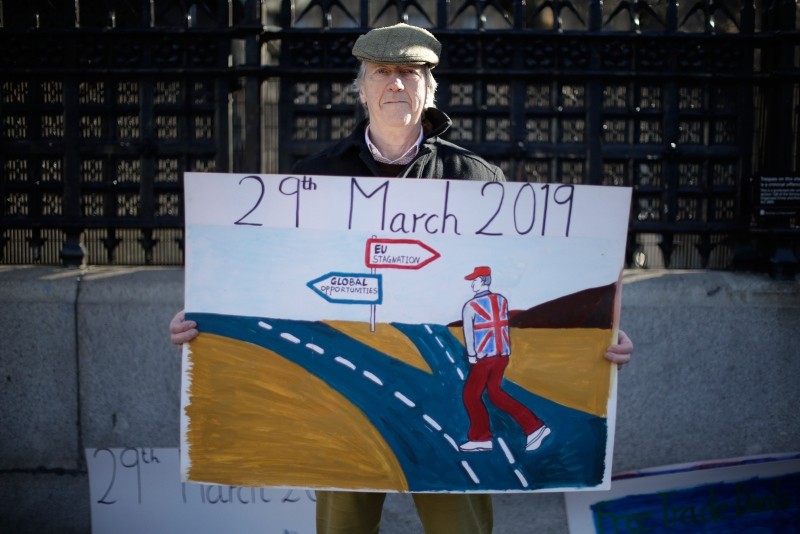 A leave the European Union supporter who didn't want to give his name poses for photographs outside the Houses of Parliament in London, Thursday, Feb. 14, 2019. (AP Photo)
by Compiled from Wire Services Feb 20, 2019 1:42 pm

Britain has until mid-March to seal a deal with the European Union, diplomatic sources in the bloc said, or it would otherwise be too late for the gathering of 28 national leaders later that month to approve it before Brexit day on March 29.

"They have until March 10, maybe March 15 at the latest," one EU diplomat said, stressing the bloc needed time to prepare approval at the leaders' summit due March 21-22.

"Otherwise they will be forced into a delay of Brexit, or crash out."

Another diplomat dealing with Brexit in the EU's political hub Brussels also said mid-March was an effective deadline for getting an agreement, should there be one before Brexit in 37 days.

May and the other 27 EU leaders approved a Brexit withdrawal agreement at a summit on November 25 last year, but the British leader's own parliament rejected it on January 15.

Since then, May and her ministers have repeatedly met EU leaders and their negotiator Michel Barnier to urge them to reopen the text to find a way to appease eurosceptic MPs.