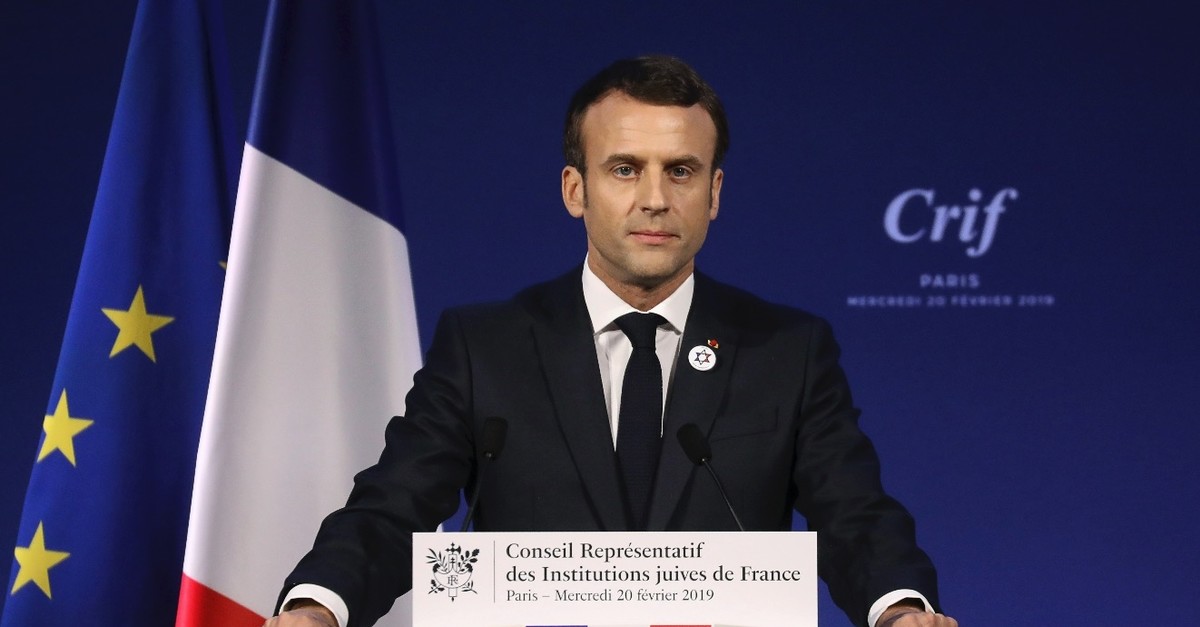 France will adopt an international definition of anti-Semitism and categorize anti-Zionism as one form of hate crime, President Emmanuel Macron said. With ambiguity surrounding the two terms, Macron has fueled a debate challenging the assertion that being anti-Zionist equates to being anti-Semitist.

Speaking at an annual dinner for the umbrella association of Jewish organizations in France, or the CRIF, "Anti-Semitism is hiding itself behind anti-Zionism," Macron said late Wednesday, while announcing that France seeks to define "anti-Zionism as a modern-day form of anti-Semitism."

Earlier this week, French lawmakers proposed a bill that would make anti-Zionism a criminal offence in the same way that anti-Semitism is illegal in France. However, contrary to French authorities' latest moves, it is a well-known fact that opposition to Israel is not comparable to anti-Semitism, as many people have, so far, been unfairly branded anti-Semitic while defending Palestinians' rights, including U.S. Congresswoman Ilhan Omar to British Labor party leader Jeremy Corbyn.

The concept of anti-Zionism is largely associated with public anger toward the policies of the state of Israel, and not necessarily against Jewish ethnicity. It is most clearly defined in the worldwide Boycott, Divestment and Sanctions (BDS) as it marks clearly the distinction between being anti-Jewish and being against either the state of Israel or the policies of the Jewish state.

Omar, a Democrat member of the U.S. House of Representatives, has faced harsh criticism from many in Washington for comments she made, in which she said congressional support for Israel is firmly rooted in political donations from pro-Israel groups, most prominently the powerful American Israel Public Affairs Committee (AIPAC). While the congresswoman's tweet was directed at Israel, politicians called it anti-Semitic. She was castigated for her "anti-Semitic hate speech" by President Donald Trump, who is known for his pro-Israel stance that props up Israeli state rights over the rights of Palestinians.

Meanwhile in the U.K., Corbyn was accused of tolerating anti-Semitism in the party. Due to growing criticism, Corbyn had to underscore the difference between the legitimate criticism of the government of Israel and anti-Semitism.

Due to a powerful Israeli lobby, the U.S. and the EU have refrained from taking concrete steps to stop Israel's oppression of Palestinians in the occupied territories, and the Israeli state continues to carry out crimes against Palestinians. With Trump's unilateral recognition of Jerusalem as the capital of Israel peace seems far out of reach 25 years after the Oslo accords, as his administration has been forcing Palestinian factions to surrender to Israeli demands and to give up the two-state solution.