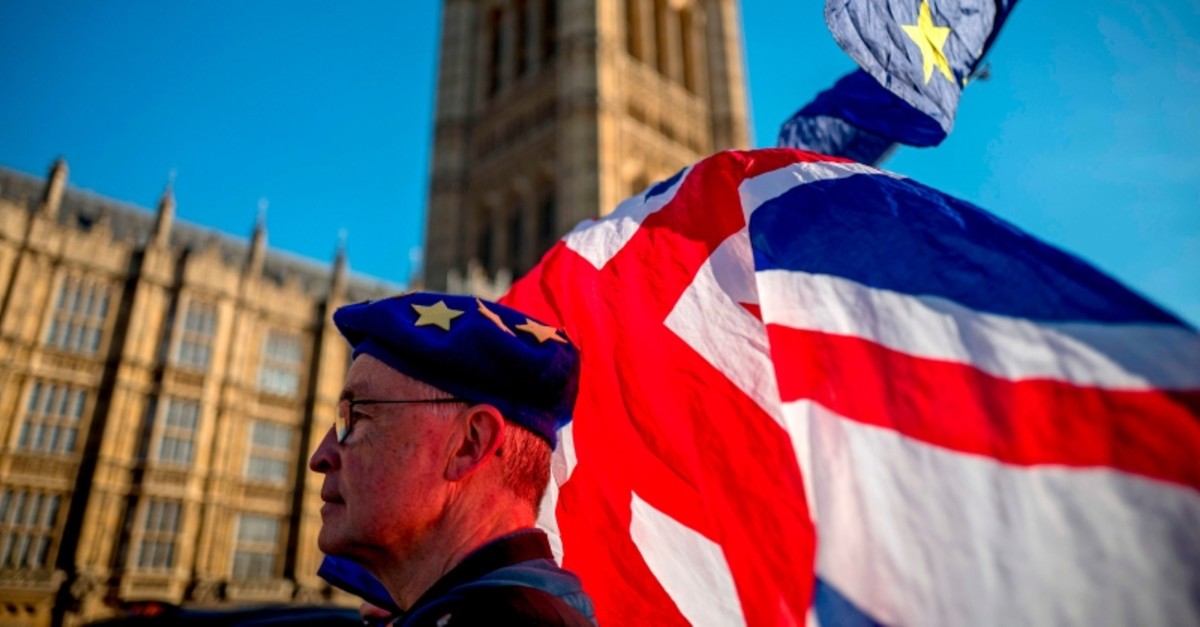 An anti-Brexit protester wearing a European Union flag cap, flies European and Union flags outside the Houses of Parliament in London on Feb. 21, 2019 (AFP Photo)
by Daily Sabah Feb 26, 2019 1:10 pm

More than half of citizens of the United Kingdom think the country has been divided, especially by the Brexit process, while political parties and the government have lost trust in the eyes of the public, a recent survey suggests.

A public survey conducted by Sky Data in January showed that 75 percent of U.K. citizens think the country has already been divided in recent years, while this rate goes up to 81 percent among those aged 25 to 34.

While 42 percent of the survey participants said that the cause behind this division is Britain's initiative to leave the European Union, some 23 percent stated politicians as the reason. Another 14 percent thought that cause of division is the migrants.

The survey results showed that some 62 percent thought the U.K. is Islamophobic and 51 percent think the country is racist.

The largest percentage of participants listed the British military as the most trusted institution in the country, followed by the national health system and the British police. The royal family ranked fourth in trustworthiness in the eyes of the public.

The government, followed by the ruling Conservative Party, the main opposition Labour Party and the media, were listed as the most unreliable institutions in the country, according to the results.

Some 87 percent of the participants were not happy with the current politicians, with this rate increasing as high as 90 percent among young people, the survey showed.

Britain held a referendum to leave the European Union on June 23, 2016, with 52 percent of the country approving the departure.

The country is due to leave the EU on March 29 but Parliament has so far rejected the deal struck between May's government and the bloc.

With just over a month until Britain is due to leave the bloc, Prime Minister Theresa May is seeking changes to her exit deal in order to break an impasse in parliament.

May and the other 27 EU leaders approved a Brexit withdrawal agreement at a summit on Nov. 25 last year, but the British leader's own Parliament rejected it on Jan. 15.

Since then, May and her ministers have repeatedly met EU leaders and their negotiator Michael Barnier to urge them to reopen the text to find a way to appease Eurosceptic MPs.