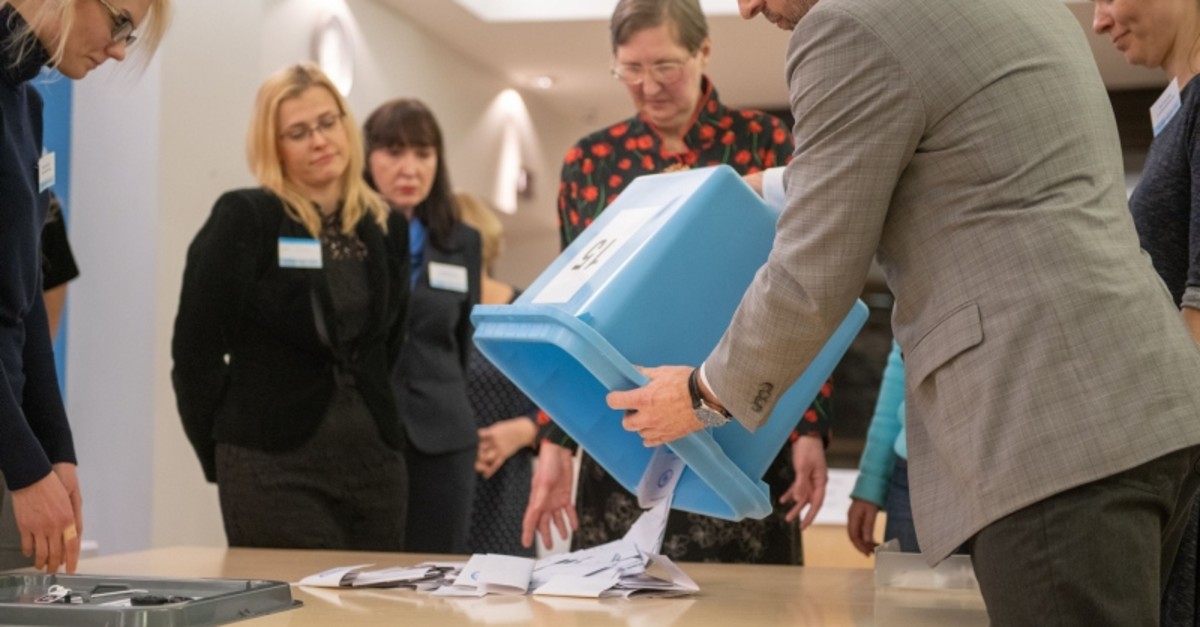 According to figures released of the e-vote via the internet reported by the BNS news agency, Reform led by former MEP Kaja Kallas garnered 40 percent, well ahead of the far-right EKRE on 13.5 percent support and Ratas's Centre Party with 11.7 percent.

E-voting which ended on Wednesday accounted for around 30 percent of the 880,690 eligible voters.

Polling stations closed at 1800 GMT Sunday and initial official results from them are due around midnight.

Bread-and-butter issues like taxation and public spending dominated the lackluster campaign, along with tensions over Russian-language education for Estonia's sizeable Russian minority and the rural-urban divide.

A pre-election poll had pointed to a tight race putting the Centre party and Reform neck-and-neck narrowly followed by the EKRE.

Promising to slash income and excise taxes and pushing anti-immigration rhetoric, the far-right EKRE stands to more than double its support to 17.3 percent, but could struggle to find coalition partners.

With five to six parties expected to enter the 101-seat parliament, the splintered outcome could make for tricky coalition building.

Traditional rivals, Centre and Reform have alternated in government and even governed together over the nearly three decades since Estonia broke free from the crumbling Soviet Union.

Both strongly support Estonia's EU and NATO membership and have favored austerity to keep spending in check, giving the country the eurozone's lowest debt-to-GDP ratio.

Two other parties in the race which currently govern with Ratas, the Social Democrats and Isamaa could team up with either Centre or Reform.

Centre has vowed to hike pensions by 8.4 percent and to replace Estonia's 20 percent flat income tax and 21 percent corporate tax with a progressive system to boost state revenue.

Joblessness hovers at just under five percent while economic growth is expected to slow to 2.7 percent this year, from 3.9 percent in 2018.

Alexander, a Russian-speaking factory worker who also did not give his full name, wants pension and salary hikes.

"It's impossible to survive with the minimum wage," he told AFP in Tallinn, referring to Estonia's 540 euro ($615) monthly minimum.

For Lauri, an advertising specialist who also declined to reveal his family name and voter preference, the isolationist and conservative social and foreign policy proposed by parties like the EKRE is cause for concern.

"There's a trend in Western Europe right now, if we look at the Netherlands, at England, maybe even France. I don't support such populism myself," he told AFP.

While it won just seven seats in the 2015 election, the EKRE is set to capture a close third spot behind established parties.

Staunchly eurosceptic, it called for an "Estxit" referendum on Estonia's EU membership, although the move would be doomed to fail in the overwhelmingly pro-EU country.

The party's deep suspicion of Moscow translates into strong support for NATO membership and the multinational battalion the alliance installed in Estonia in 2017 as a tripwire against possible Russian adventurism.

Tonis Saarts, a Tallinn University political scientist, describes the EKRE's position on liberal democracy, including civic and human rights, rule of law and the separation of powers, as "very ambiguous" and draws comparisons to similar parties that have gained support across Europe in recent years.

The party's surging popularity is largely rooted in the misgivings of rural Estonians who feel left behind after years of austerity under Centre and Reform.

"These people see few economic prospects and feel the mainstream parties don't care much about their problems," Saarts told AFP.

The Centre party has long been favored by the Russian minority, comprising around a quarter of the Baltic state's population of 1.3 million.

To avoid losing voters suspicious of Russia, Ratas insists that a 2004 cooperation deal with Vladimir Putin's United Russia party is "frozen." But out of fear of losing the Russian vote, he has refused to rip it up.

The minority is counting on Centre to save the existing education system comprising Estonian and Russian-language schools set up in Soviet times, while Reform and EKRE want to scrap Russian-language teaching.