French police's use of force against 'yellow vests' in spotlight

The French government's response to months-long yellow vest protests has faced international scrutiny, lately by the U.N., as the excessive use of force by police has injured hundreds of people

The response of French President Emmanuel Macron's government to the "yellow vest" protests has been seen as an escalation of state violence toward its citizens as the U.N. recently urged a French probe into the use of force during the protests, in which more than 300 people were injured by police violence.

The U.N. rights chief on Wednesday called for a "full investigation" into the possible use of excessive force by French police during the often violent yellow vests (Gilets Jaunes) protests. The Gilets Jaunes have been protesting what they see as exclusion from economic rights and participation in public affairs," Michelle Bachelet said in her annual address to the U.N. Human Rights Council in Geneva. "We encourage the government to continue dialogue, including follow-up to the national discussions which are currently under way, and urge the full investigation of all reported cases of excessive use of force," the former Chilean president said. 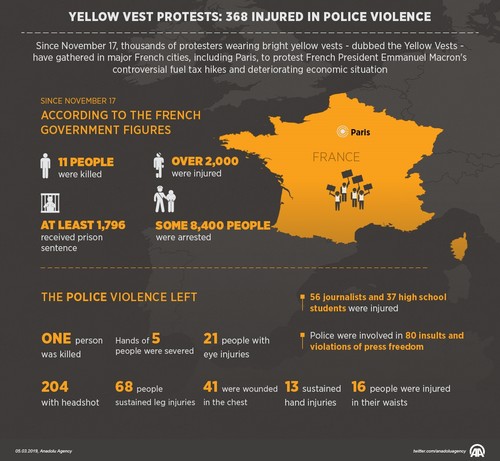 Bachelet's comments received a frosty reception in Paris where Prime Minister Edouard Philippe said France "did not need [the U.N.] to shed light" on the violence which has marred the yellow vest protests. "In France, we have the rule of law," he told BFMTV, suggesting it was necessary "to tell the high commissioner about all the incidents of extreme violence," notably those against the security forces and public property. French government spokesman Benjamin Griveaux also expressed surprise at Bachelet's criticism of France, noting that the IGPN, which investigates police abuses, had launched 162 investigations into the conduct of officers during the protests.

Nearly 370 people were injured since last November, an online investigative French journal said on Tuesday. According to Mediapart, one person was killed and 368 others injured after getting shot by tear gas capsules of French police during anti-government protests. The police violence left 21 people with eye injuries, 204 others with head injuries, as a consequence of the explosion of concussive grenades. Some 68 people sustained leg injuries while 41 others were wounded in the chest. Among those injured were 56 journalists and 37 high school students. The horrifying images of students, outdoors in the suburban city of Mantes La Jolie, on their knees, hands behind their heads had shocked France. They are being watched over by armed police officers whose faces are hidden by ski masks. The yellow vest movement originally started against fuel tax hikes but has snowballed into a wider revolt against a president and government accused of being out-of-touch with ordinary people. The riots were among the worst violence the capital has experienced since a 1968 student uprising. Violent clashes with police have persisted on the fringes of weekly marches in Paris, Toulouse, Bordeaux and other cities.