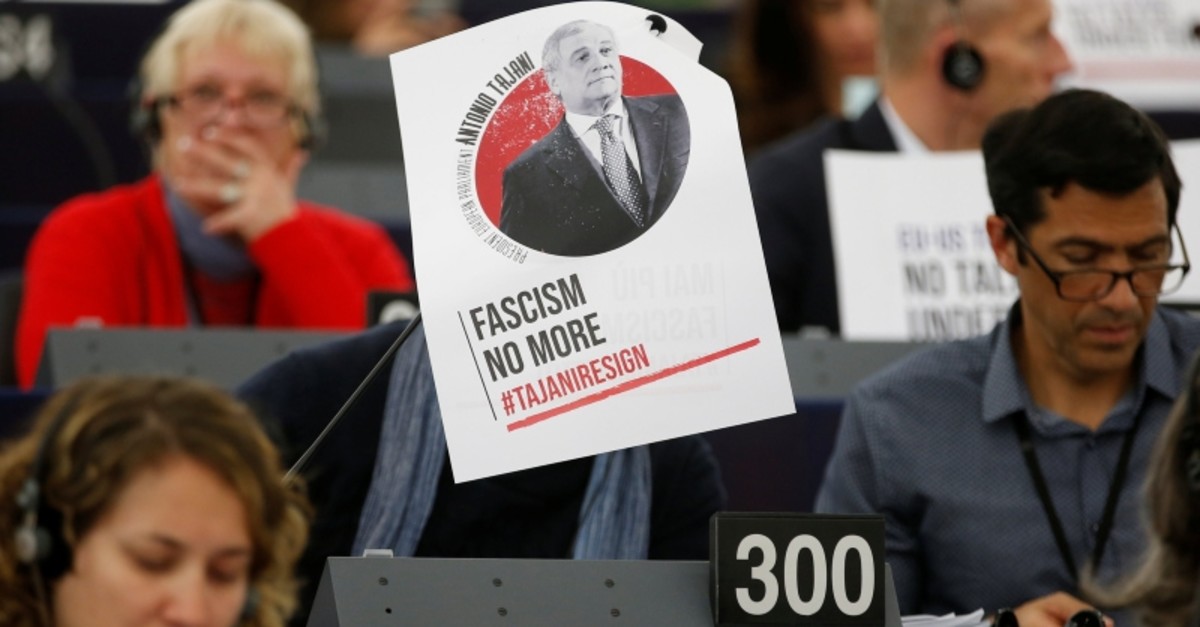 A portrait of European Parliament President Antonio Tajani with the slogan ,no more facism, is placed on the desk of a Member of the European Parliament during a voting session in Strasbourg, France, March 14, 2019. (Reuters Photo)
by Compiled from Wire Services Mar 14, 2019 12:00 am

Tajani told Radio 24 Wednesday evening that Mussolini did some "positive things," including improving Italy's infrastructure, until "he declared war on the entire world, following Hitler, until he promoted the racial laws" that restricted the rights of Jews.

"You don't have to agree with his methods... but let's be honest, Mussolini built roads, bridges, buildings, sports installations, he remade many parts of our Italy," said Tajani, who is close to tycoon and former premier Silvio Berlusconi.

Tajani, who is a member of Silvio Berlusconi's Forza Italia party, was criticized from across the political spectrum, inside and outside of Italy.

Faced with a barrage of criticism, Tajani took to Twitter to defend himself.

"Shame on those who manipulate what I've allegedly said on fascism. I've always been a convinced anti-fascist, I will not allow anyone to suggest otherwise," he wrote.

"The fascist dictatorship, racial laws and deaths it caused are the darkest page in Italian and European history."

On Thursday, #Tajani was trending in Italy, with one user tweeting a photo of a glass of brackish water: "There's also clean water in this glass."

Left-wing MEPs in Brussels recalled the alliance of Tajani's Forza Italia with far-right parties the Lega and Fratelli d'Italia.

"The statements by the president of the European Parliament are unworthy and absolutely unacceptable," the head of the Greens-European Free Alliance grouping, Ska Keller, said in a statement.

Following the backlash, Tajani apologized for his remarks.

"As a convinced anti-fascist, I apologise to all those who may have been offended by what I said. My remarks were in no way intended to justify or minimise an anti-democratic and totalitarian regime," he said in a statement.

Italy has struggled to come to terms with its fascist past and the rise of populism has brought reminders of Mussolini's two-decades in power until his execution in 1945.