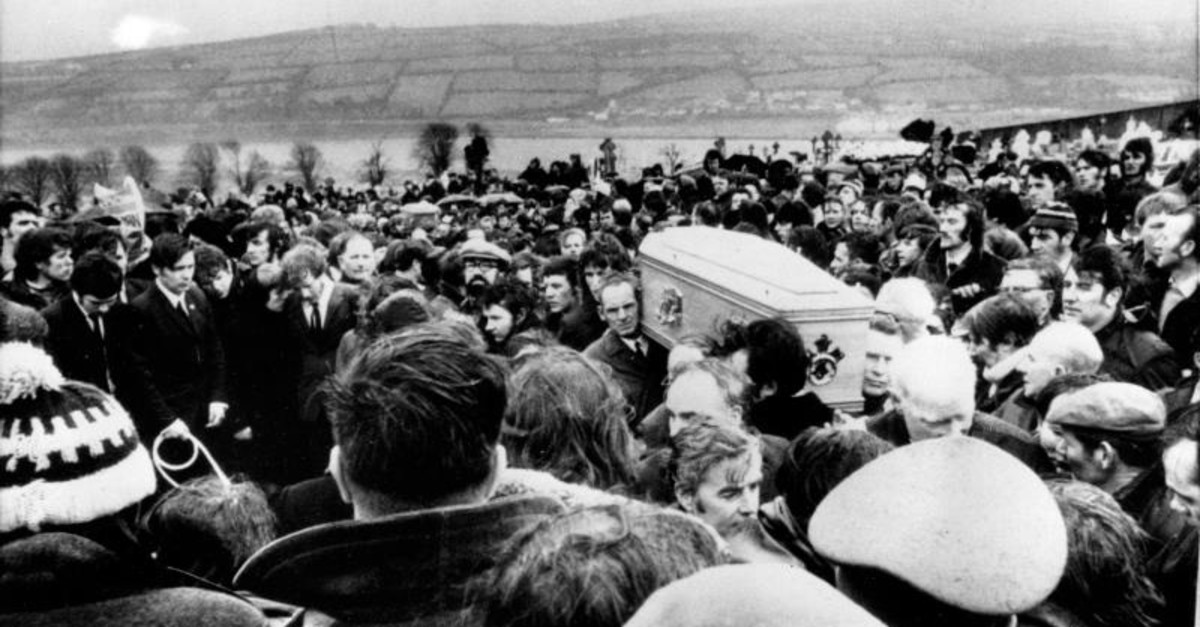 In this Feb. 2, 1972 file photo, pallbearers carry one of 13 coffins of Bloody Sunday victims to a graveside during a funeral in Londonderry, Northern Ireland. (AP Photo)
by Compiled from Wire Services Mar 14, 2019 2:45 pm

One former British soldier from the Parachute Regiment's 1st battalion will face prosecution for the killing of 13 civil rights marchers in Londonderry 47 years ago, Northern Ireland's Public Prosecution Service said on Thursday.

The ex-soldier, identified as soldier "F',' was one of 17 former members of the 1st Battalion Parachute Regiment whose actions in Londonderry were being considered for criminal charges. He is to be charged with two murders and four attempted murders during Bloody Sunday.

The veteran will face prosecution for the murders of James Wray and William McKinney and the attempted murders of Joseph Friel, Michael Quinn, Joe Mahon and Patrick O'Donnell.

Sixteen other soldiers under investigation will not face prosecution in the shootings, which took place at the height of the unrest in Northern Ireland known as the Troubles.

The charges follow a decade-long investigation that concluded soldiers killed 13 unarmed demonstrators protesting Britain's detention of suspected Irish nationalists. But the results of the inquiry that concluded in 2010 could not be used in any prosecution, and Thursday's charges resulted from a separate police investigation into the incident.

"I wish to clearly state that where a decision has been reached not to prosecute, that this is in no way diminishes any finding by the Bloody Sunday Inquiry that those killed or injured were not posing a threat to any of the soldiers," Stephen Herron, the director of public prosecutions for Northern Ireland, said as he announced the charges. "We recognize the deep disappointment felt by many of those we met with today."

The victims' families have called for justice, while supporters of the soldiers say it is unfair for them to face charges decades after the events.

On Sunday, January 30, 1972, British troops opened fire during an unauthorized march in the Bogside, a nationalist area of Londonderry. They killed 13 people and wounded 14 others, one of whom died later. The victims were all unarmed Catholics.