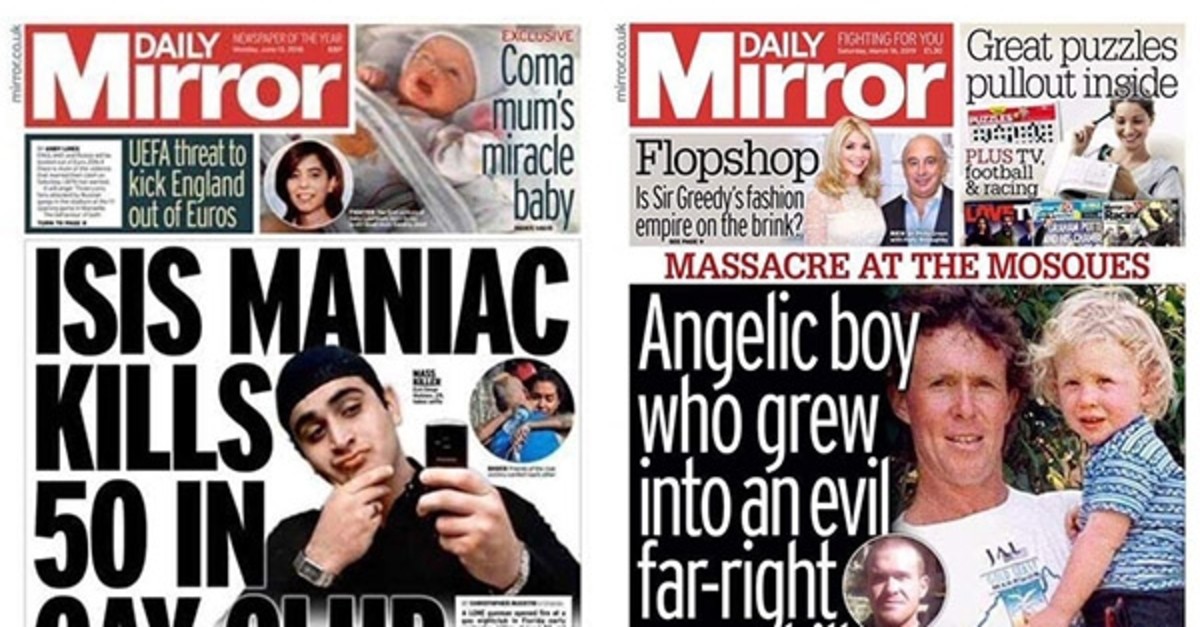 The Daily Mirror was harshly criticized on social media for whitewashing the Australian terrorist who killed 49 people during Friday prayers at two mosques in New Zealand's Christchurch.

The British newspaper reserved most of the page for an innocent childhood photo of the cold-blooded murderer Brenton Tarrant, describing him as an "angelic boy who grew into an evil far-right mass killer."

Twitter users also criticized the Daily Mirror for not referring to the perpetrator as a terrorist but calling him a killer instead.

The critical audience also compared the newspaper's front page for the New Zealand terror attack with previous terror attacks carried out by terrorists with Middle Eastern roots, which were described as terrorists. The newspaper's headline for the Daesh-linked Orlando nightclub shooting, commited by 29-year-old Afghani-Pashtun origin Omar Mateen killing 49 people on June 12, 2016 was "ISIS maniac kills 50 in gay club."

Readers questioned why other terrorists were described as such but why the Australian terrorist was referred to as a far-right mass killer.

The 28-year-old terrorist, who is an Australian citizen with Scottish descent, killed 49 people in the Masjid Al Noor mosque and another mosque in the city's southern suburb of Linwood.

More than 40 people are still being treated in hospital for injuries, including a 4-year-old child, after the terror attack thought to be the deadliest directed against Muslims in the West in modern times.

The man who claimed responsibility for the shootings said in a 74-page anti-immigrant "manifesto" that he came to New Zealand only to plan and train for the attack.

The terrorist also targeted Turks in his "manifesto," saying Turks would be forced out of Europe and all mosques in Istanbul would be demolished.