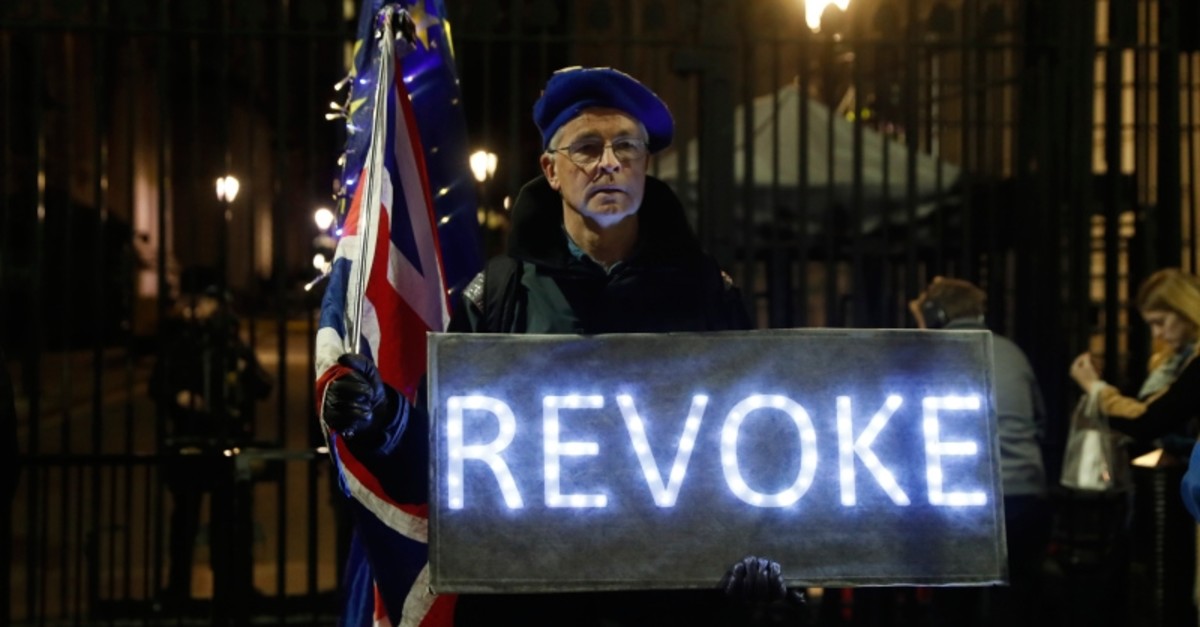 An anti Brexit campaigner stands outside the entrance to Downing Street with flags and a banner in London, Wednesday, March 20, 2019. (AP Photo)
by Daily Sabah with Agencies Mar 21, 2019 1:56 pm

An online parliament petition asking the government to remain in the EU and revoke Article 50 -- the clause of the EU treaty under which Britain is leaving -- has been taken down after receiving 1 million signatures in a day.

The website crashed Thursday after receiving an overwhelming number of visitors.

The petition received more than a quarter of a million signatures shortly after it was put online Wednesday.

British parliament's petition committee said on Twitter the petition saw "the highest the site has ever had to deal with."

"The government repeatedly claims exiting the EU is 'the will of the people.' We need to put a stop to this claim by proving the strength of public support now, for remaining in the EU. A People's Vote may not happen — so vote now," petition creator Margaret Anne Georgiadou said.

"Revoke Article 50" was trending on Twitter in the U.K. and worldwide on Thursday, with users also sharing links to the petition.

The British Parliament considers all petitions for debate that get more than 100,000 signatures.

Prime Minister Theresa May is trying to persuade European Union leaders to delay Brexit by up to three months, just eight days before Britain is scheduled to leave the bloc.

May will meet the 27 national other EU leaders in Brussels on Thursday, a day after she requested an extension until June 30.

European Council President Donald Tusk says a short delay may be possible, but only if Britain's Parliament approves May's divorce deal with the bloc before the scheduled March 29 departure date.

U.K. lawmakers have already rejected the deal twice. May says they face a "final choice" between her deal, a no-deal departure that could hammer the economy, and cancelling Brexit.

But May angered many legislators with a televised speech Wednesday blaming Parliament for the Brexit impasse.