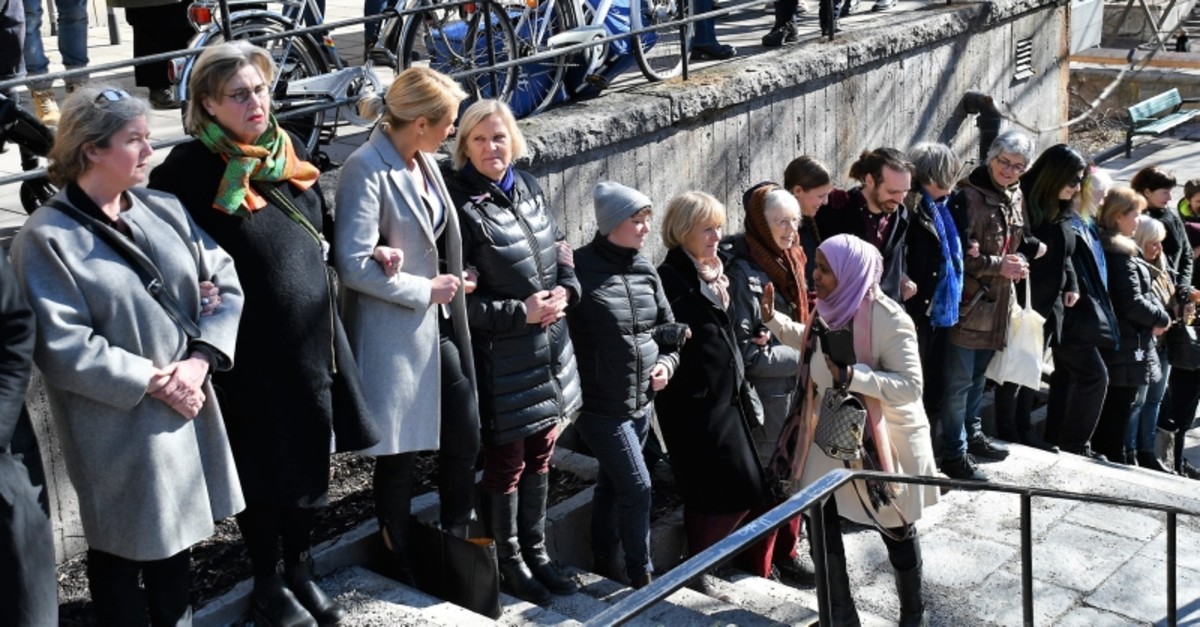 People stand in a protective ring around the Stockholm mosque during Friday prayers, on Friday March 22, 2019, to honour the 50 Muslim worshippers killed one week ago by a gunman in Christchurch, New Zealand. (AA Photo)
by Compiled from Wire Services Mar 22, 2019 12:00 am

Dozens of people formed a human shield around a mosque in Swedish capital Stockholm on Friday in a bid to ensure Muslim worhippers' security during the weekly prayer.

The demonstration of solidarity with the country's Muslim community comes a week after a white supremacist killed 50 people in twin terror attacks on mosques in New Zealand.

Sweden's Culture and Democracy Minister Amanda Lind told Anadolu Agency that she was very happy to see so many people gather at the mosque to ensure a peaceful Friday prayer for Muslims.

She said that it is not only the terror attacks in New Zealand but the urge to fight racism and Islamophobia, as well, that brought them all together.

One of the participants, named as Mattias Schain, told Swedish broadcaster SVT that the chain was being formed in support of the victims of last week's terrorist attack in Christchurch, New Zealand, which left 50 people dead.

"Secondly, it was also to show that we share the concern and grief that many Muslims feel after the attacks in Christchurch," he said.

Schain, who said he was Jewish, added that he believes "an event that happens on the other side of the world can affect you in terms of uncertainty and worry."

People of faith including Muslims, Swedish Lutherans Catholics and Jews took part at the Stockholm rally, as did atheists, SVT reported.

One of the participants held a sign that read: "We stand with you. And around you."

A young Muslim woman outside the mosque, named as Madina Sejadi, said she welcomed the support, saying "everyone here wants to show that they are stronger than hatred."

Heart-shaped post-it notes were also put on the mosque's doors.