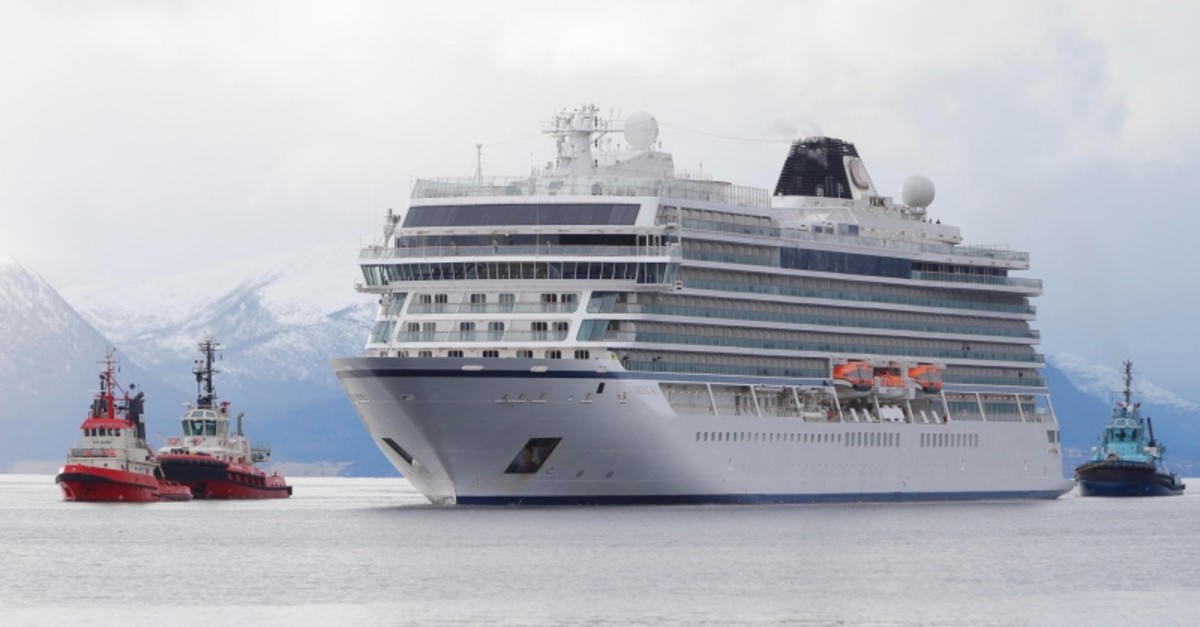 Viking Sky cruise ship arrives, after problems the ship got in the storm outside of Hustadvika, at Molde, Norway March 24, 2019. (Reuters Photo)
by Compiled from Wire Services Mar 24, 2019 7:07 pm

Accompanied by tug boats, a Viking Sky cruise ship limped into the Norwegian port of Molde more than a day after issuing a mayday call in a storm that led to harrowing helicopter rescues of a third of its passengers.

The Viking Sky carried 1,373 passengers and crew when it had engine trouble Saturday afternoon off the western coast of Norway, a stretch of coastline notorious for shipwrecks. Afraid of dashing up on the rocks, it anchored amid heavy seas and high winds and began to evacuate everyone on board.

Amid wind gusts up to 38 knots (43 mph) and waves over 8 meters (26 feet), five helicopters flying in the pitch dark evacuated passengers from the heaving ship throughout the night into Sunday morning. Over 475 passengers were airlifted one-by-one off the ship.

Police said 17 passengers had been taken to the hospital after the airlift. One person more than 90 years old and two 70-year-olds suffered serious fractures.

With three of four engines restarted Sunday, two tugs towed the vessel away from dangerous reefs before it set sail for Molde, 500 kilometres (300 miles) northwest of Oslo, under its own power.

Dramatic footage of the passengers' ordeal showed furniture and plants sliding around the lurching vessel as parts of the ceiling came down.

Dozens of passengers wearing life jackets were seen seated waiting to get off the ship.

"I have never seen anything so frightening," said Janet Jacob, who was rescued.

"I started to pray. I prayed for the safety of everyone on board," she told the NRK television channel.

"The helicopter trip was terrifying. The winds were like a tornado," she added.

"We were sitting down for breakfast when things started to shake... It was just chaos," said another passenger, American John Curry, as quoted in Norwegian by local media.

Passenger Rodney Horgan said he had been reminded of the Titanic.

"Seawater 6 to 7 feet (about 2 metres) high just came rushing in, hit the tables, chairs, broken glass and 20-30 people just... went right in front of me. I was standing, my wife was sitting in front of me and all of a sudden, she was gone. And I thought this was the end," Horgan said.

But it all ended well for Ryan Flynn. "Here's my 83-year-old dad being airlifted from the #vikingsky," he said. "We are all off the ship safely!"

The ship was sailing south from Tromso to Stavanger when engine trouble struck mid-afternoon on Saturday in an area off More og Romsdal that has claimed many vessels.

"It is dangerous to encounter engine problems in these waters, which hide numerous reefs," said Tor Andre Franck, the head of police operations.

A reception centre was set up in a gym on shore for the evacuees, many of whom were elderly and from the United States and Britain.

The area where the ship got into problems, known as Hustadvika, is notoriously difficult to navigate.

The shallow, 10 nautical mile section of coastline is dotted with small islands and reefs.

"Hustadvika is one of the most notorious maritime areas that we have," Odd Roar Lange, a journalist specialising in tourism, told NRK.

In their time, the Vikings hesitated to venture into the Hustadvika, preferring instead to transport their boats by land from one fjord to another.

Operated by the Norwegian firm Viking Ocean Cruises, the Viking Sky was launched in 2017 with a capacity of 930 passengers plus crew.

In addition to U.S. and British nationals, there were also passengers from 14 other countries on board, Fjeld said.