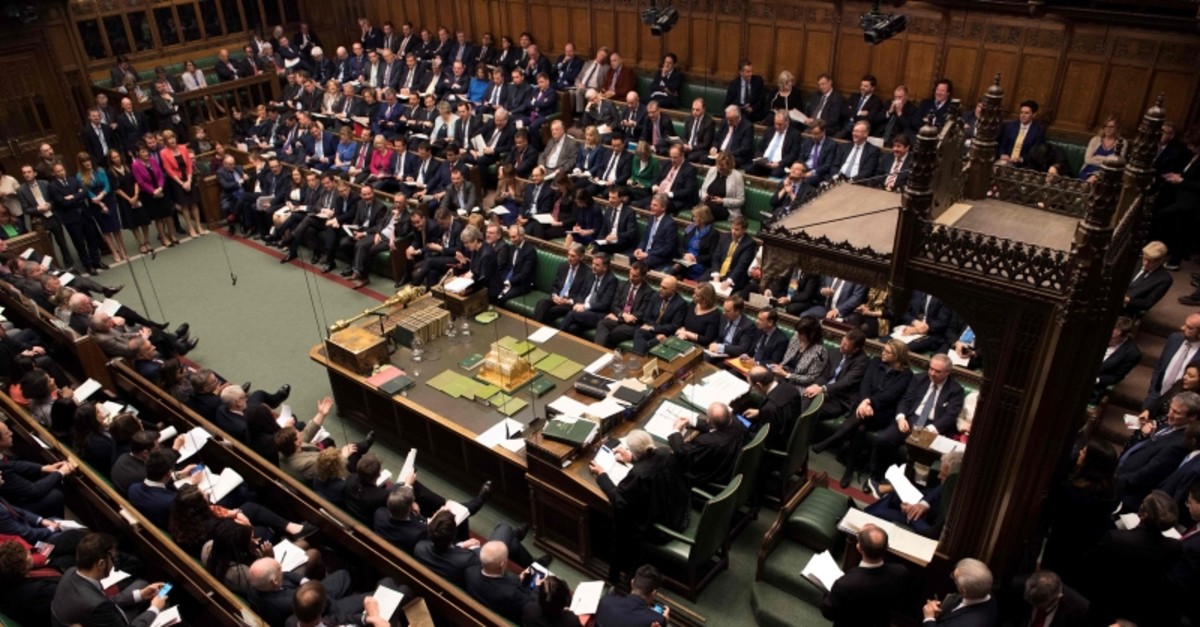 A handout photograph taken and released by the UK Parliament on March 27, 2019 shows May standing at the dispatch box and speaking during the weekly Prime Minister's Questions (PMQs) question and answer session in the House of Commons in London.
by Compiled from Wire Services Mar 28, 2019 12:49 am

Lawmakers voted Wednesday on options that included leaving the European Union without a deal, staying in the bloc's customs union and single market, putting any EU divorce deal to a public referendum, and canceling Brexit if the prospect of a no-deal departure gets close.

The strongest support was for a plan to stay in a customs union with the bloc after Brexit, which was defeated by eight votes: 272-264.

Lawmakers plan to narrow the list of options down and hold more votes on Monday.

Parliament did vote to approve a secondary legislation to delay the date of the divorce from the European Union. The vote was 441 in favor of the delay against 105 opposed.

Britain has until April 12 to find a new plan — or crash out of the EU without a deal.

The fact that none of the alternative Brexit options voted on by British lawmakers on Wednesday won the support of a majority shows that May's deal is the best option, Brexit minister Stephen Barclay said.

"The results of the process this House (of Commons) has gone through today strengthens our view that the deal the government has negotiated is the best option," Barclay told parliament.

The lawmaker who led a move for parliament to vote on Brexit alternatives said Wednesday he was disappointed lawmakers had failed to find a majority on a way forward to break the impasse over Britain's departure from the European Union.

Oliver Letwin, a Conservative, said there was another opportunity on Monday for parliament to find a majority for a way forward but also said he hoped lawmakers would pass May's deal before the end of Friday.

"It is of course a very great disappointment that the House (of Commons) has not chosen to find a majority for any proposition," Letwin said, adding it was what he had expected to happen.

"If on Monday the House is able to reach a majority view I think that would be in the interests of our constituents."

May told Conservative lawmakers earlier Wednesday that she is prepared to step down "earlier than I intended" in order to win passage of her Brexit deal.

A leadership contest to replace May will begin after May 22 if her deal to leave the EU is passed by parliament, her office told Conservative lawmakers on Wednesday.

Several MPs who voted against the deal have suggested they could now back it if May gave a timetable for her resignation, allowing a new leader to head the negotiations over Britain's future relationship with the EU.