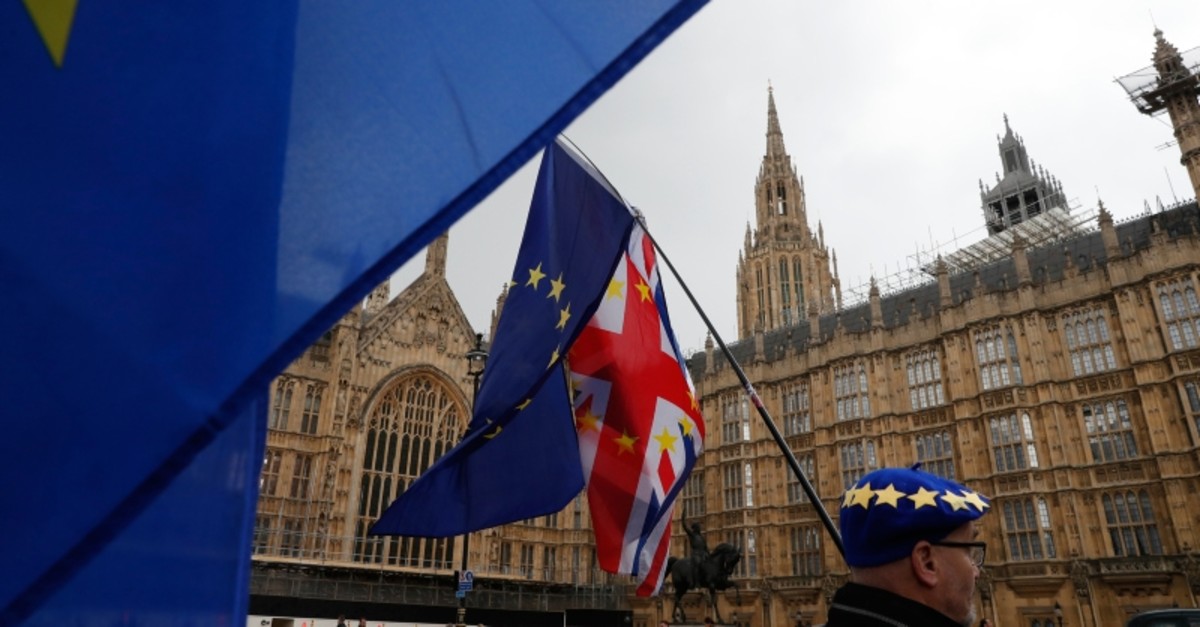 Anti Brexit demonstrators hold up their flags opposite the Houses of Parliament in London, Wednesday, April 3, 2019. (AP Photo)
by Compiled from Wire Services Apr 03, 2019 12:00 am

British lawmakers have backed by a single vote a motion that seeks to force Conservative Prime Minister Theresa May to legislate against Britain leaving the European Union without a deal.

The House of Commons, parliament's elected main house, voted by 312 to 311 for the cross-party motion requiring May to seek another delay to Brexit and pass legislation preventing a no-deal Brexit without parliamentary approval.

Following the vote, the lawmakers began a debate on a bill that its Conservative and opposition Labour backers hope to steer through second and third votes late Wednesday.

John Bercow, the Commons speaker, used his casting vote earlier after a tie on an amendment to the main motion.

According to the debate that followed Bercow's decision, it was the first time since 1993 that a parliamentary speaker had used the right to a casting vote.

On Wednesday, in an about-face that left pro-Brexit members of May's Conservative Party howling with outrage, May sought to forge an agreement with left-wing Labour Party leader Jeremy Corbyn after failing three times to win Parliament's backing for her Brexit deal.

May also said she would ask the EU for a further delay to Britain's departure date — postponed once already — to avert a chaotic and economically damaging no-deal Brexit on April 12.

"The country needs a solution, the country deserves a solution, and that's what I'm working to find," May told lawmakers before meeting with Corbyn for about two hours.

Afterward, both the Conservatives and Labour called the meeting "constructive" and said their teams would hold more in-depth talks Thursday.

May's dramatic shift left her caught between angry Conservatives who accuse her of throwing away Brexit, and Labour opponents mistrustful of her sudden change of heart.

Labour lawmaker Paul Sweeney said May's outreach to his party "shows the desperation that she's in." He said May wanted Labour "to bail her out of a position she's dug herself in."

May's pivot infuriated pro-Brexit Conservatives, who were seeking ways to stymie her plans. Two junior ministers quit, and other lawmakers angrily accused May of putting the socialist Corbyn in the Brexit driver's seat.

Her cross-party talks — after almost three years of seeking to push through her own version of a Brexit divorce deal — came amid EU warnings that a damaging withdrawal without a plan is growing more likely by the day.

After lawmakers three times rejected an agreement struck between the bloc and May late last year, the leaders of the EU's 27 remaining countries postponed the original March 29 Brexit date and gave the U.K. until April 12 approve the divorce deal or come up with a new one.

So far the House of Commons has failed to find a majority for any alternative plan.

"A no deal on 12 April at midnight looks more and more likely," European Commission President Jean-Claude Juncker said Wednesday, adding that would bring disruption for EU citizens and businesses, but much worse economic damage for Britain.

EU Economy Commissioner Pierre Moscovici said a "no-deal" Brexit would mean long lines at borders and paperwork headaches for customs checks on the 11,000 vehicles entering and leaving Britain each day.

"I prefer strict controls at the price of a few lines of trucks to a health crisis or illegal trafficking," he said. "The security of Europeans will be our top priority."

May's pivot toward Labour points Britain toward a softer Brexit than the one she has championed since British voters decided in June 2016 to leave the EU. Labour wants the U.K. to remain in the EU's customs union — a trading area that sets common tariffs on goods coming into the bloc while allowing free trade in goods moving between member states.

May has always ruled that out, saying it would limit Britain's ability to forge an independent trade policy.

May's decision to negotiate with Corbyn is risky for both the Conservatives and Labour, and could widen divisions over Brexit that run through both parties.

Labour is formally committed to enacting the voters' decision to leave the EU, but many of the party's lawmakers want a new referendum that could keep Britain in the bloc. They will be angry if the party actively helps bring about the U.K.'s departure.

Meanwhile, May's move infuriated pro-Brexit Conservatives who say Britain must make a clean break with the EU in order to take control of its laws and trade policy.

Junior Wales Minister Nigel Adams quit his post, sending May a letter criticizing her for seeking a deal with "a Marxist who has never once in his political life out British interests first" — a reference to the left-wing Corbyn.

He was followed by junior Brexit minister Chris Heaton-Harris, who said in his resignation letter that the government "should have honored the result of the 2016 referendum" and left the EU on March 29.

German Chancellor Angela Merkel said she would work "until the last hour" to secure an orderly Brexit, but stressed that "these solutions have to be reached above all in Britain itself."

The EU's Brexit coordinator, Guy Verhofstadt, joked that "the sessions in the House of Commons have become more popular than the matches in the Premier League."

"The trouble is that it is always a draw in the House of Commons," he said.