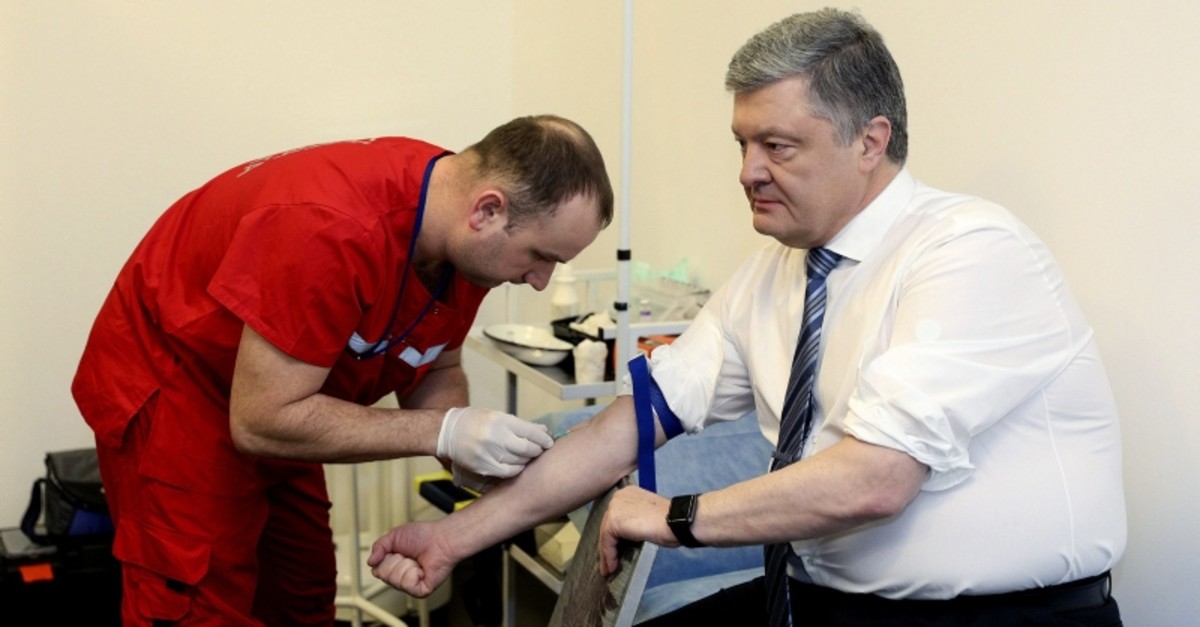 The two remaining candidates in Ukraine's presidential race underwent televised drug and alcohol tests on Friday, capping a week in which they traded jibes in tit-for-tat social media videos and goaded each other to agree to a live policy debate.

President Petro Poroshenko is facing Volodymyr Zelenskiy, a comedian with no political experience who plays a fictional president in a TV series, in a run-off on April 21 after neither obtained a majority of votes in the first round last Sunday.

Zelenskiy won nearly twice as many votes as Poroshenko, but the incumbent is fighting back by painting his rival as a lightweight who would put Ukraine's security at risk.

The comedian had demanded they both be tested for drugs after he accepted Poroshenko's challenge for a policy debate in an apparent attempt to up the ante in their rivalry.

Early on Friday, Zelenskiy, 41, was shown in a livestream on his Facebook page undergoing a blood test at a private laboratory.

"I took a blood test. They pumped all sorts of blood out of me. But thank God, I have enough of it. Young blood," he told reporters afterwards.

An hour later, several television channels broadcast live footage of Poroshenko, 53, having his blood drawn by a medic in red scrubs in a room inside Kiev's main football stadium.

Poroshenko, 53, submitted blood, hair and urine samples to four different laboratories, said Volodymyr Yary, the chief doctor at a Kiev state hospital. He announced that the preliminary results from Poroshenko's test showed that "no psychoactive substance was found."

Poroshenko goaded Zelenskiy for not accepting his invitation to have the tests done at the stadium alongside him.

"I'm at the stadium today," Poroshenko told reporters. "Volodymyr Oleksandrovych, as I understand it, was not. I came, but you didn't. No matter, I am sure that he will pick up the courage and come here and the debate will happen."

On Wednesday, Zelenskiy accepted Poroshenko's challenge to take part in a policy debate but set his own conditions, including that it be held at the football stadium.

Poroshenko released another video overnight accusing Zelenskiy of setting many preconditions as a way of avoiding the debate altogether.

Asked after Friday's drugs tests why he had not accepted Poroshenko's request to take the test at the stadium, Zelenskiy said: "There is no laboratory there. It was a very strange invitation."

He also said he would receive his results in three days.

"We will show you the results. Everything is done officially," he said.

No date has been set for the debate between the two candidates. In the video posted online overnight, Poroshenko told his rival: "Man up, come to the debates. We agreed on the stadium, I am waiting."