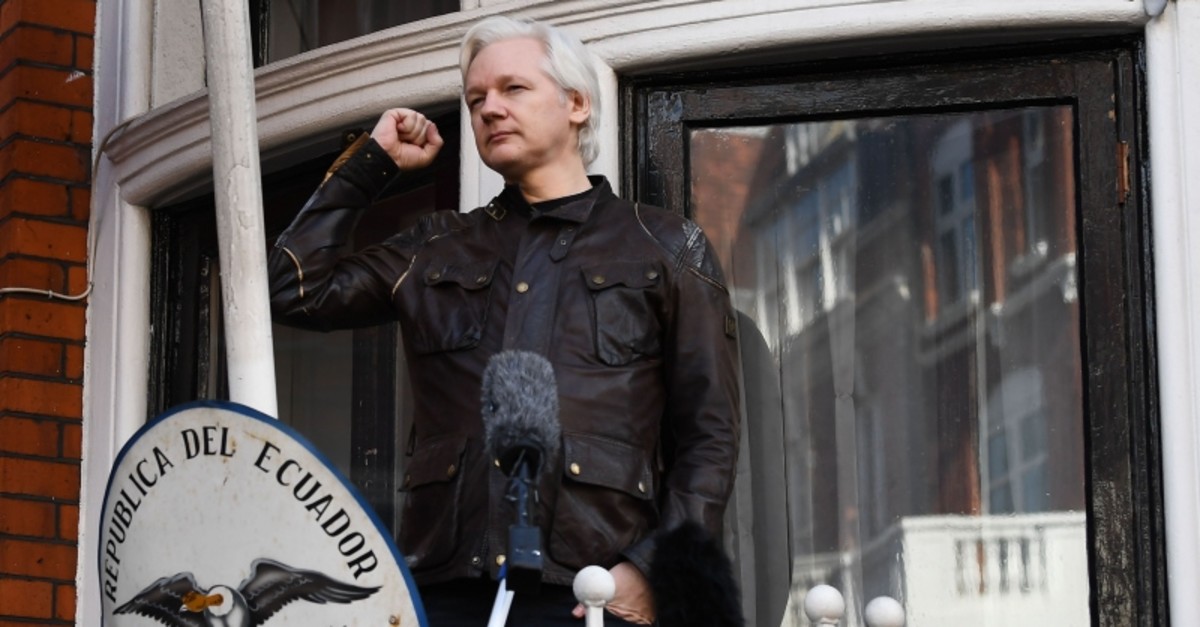 In this file photo taken on May 19, 2017 WikiLeaks founder Julian Assange speaks on the balcony of the Embassy of Ecuador in London. (AFP Photo)
by Compiled from Wire Services Apr 11, 2019 12:41 pm

WikiLeaks founder Julian Assange was arrested by British police on Thursday after they were invited into the Ecuadorean embassy where he has been holed up since 2012.

"Julian Assange, 47, has today, Thursday 11 April, been arrested by officers from the Metropolitan Police Service (MPS) at the Embassy of Ecuador," the Scotland Yard said. Police said they arrested Assange after being "invited into the embassy by the Ambassador, following the Ecuadorean government's withdrawal of asylum."

Assange has been "further arrested on behalf of the United States authorities" following his arrest earlier Thursday for breach of bail, British police said later on Thursday.

Assange was "arrested on behalf of the United States authorities, at 10:53 hrs (0953 GMT) after his arrival at a central London police station," the Metropolitan Police said.

The police said they acted on an extradition warrant, adding that Assange will appear at London's Westminster Magistrates' Court "as soon as possible."

Assange is wanted by Britain for violating prior bail conditions -- a minor charge that WikiLeaks fears will be used as a pretext for extraditing him to the United States. There he potentially faces a far more serious case linked to the publication of classified U.S. defense material.


Footage distributed by Ruptly showed about five to six men in suits forcibly escorting Assange out of the embassy building, surrounding him as he staggered down the steps and boarded a police van. "The U.K. must resist this attempt by Trump administration," Assange is heard saying.

Assange took refuge in Ecuador's London embassy in Knightsbridge in 2012 to avoid being extradited to Sweden, where authorities wanted to question him as part of a sexual assault investigation. That probe was later dropped in 2017, but Assange fears he could be extradited to face charges in the United States, where federal prosecutors are investigating WikiLeaks.

Assange was taken into custody at a central London police station and he will be brought before Westminster Magistrates' Court, police said.

Assange's relationship with his hosts collapsed after Ecuador accused him of leaking information about President Lenin Moreno's personal life. Moreno had previously said Assange, who became an Ecuadoran citizen, has violated the terms of his asylum.

In a sovereign decision, Ecuador withdrew the asylum status to Assange after his repeated violations to international conventions and daily-life protocols, Moreno said Thursday.

Moreno said that he had asked Britain to guarantee that Assange would not be extradited to a country where he could face torture or the death penalty.

"The British government has confirmed it in writing, in accordance with its own rules," Moreno said.

"The discourteous and aggressive behavior of Mr Julian Assange" as well as "hostile and threatening declarations" by an unnamed organization against Ecuador made the asylum of Assange "unsustainable and no longer valid," Moreno said in a video message distributed via Twitter.

"He particularly violated the norm of not intervening in the internal affairs of other states," he added.

Assange's Ecuadorean citizenship has been suspended, the Andean country's foreign minister said on Thursday. Assange and WikiLeaks have intervened in Ecuadorean affairs and people close to him, including two Russian hackers, are living in Ecuador, the interior minister told journalists.

"Moreno is a corrupt man, but what he has done is a crime that humanity will never forget."

Last week, the WikiLeaks had claimed that "a high-level source within the Ecuadorian state has told WikiLeaks that Julian Assange will be expelled within 'hours to days' using the INAPapers offshore scandal as a pretext -- and that it already has an agreement with the UK for his arrest," said WikiLeaks on Twitter, referring to documents allegedly implicating corruption by Ecuador's president.

WikiLeaks on Wednesday had claimed that it was being blackmailed by "dubious characters" who had obtained security camera footage of Assange inside the embassy.

WikiLeaks editor Kristinn Hrafnsson accused Ecuador authorities of gathering the images as well as copies of private documents prepared for Assange by his lawyers.

Hrafnsson said these had then found their way into the hands of a group in Spain that was demanding $3 million (2.7 million euros) not to publish them.

The documents include thousands of photographs and gigabytes of video footage showing Assange meeting with lawyers and visitors and of him receiving a medical check-up.

"Since (President Lenin) Moreno took power in Ecuador (in 2017), Julian Assange has been living in a Truman Show type (surveillance) situation," Hrafnsson said.

To some, Assange is a hero for exposing what supporters cast as abuse of power by modern states and for championing free speech, who fearlessly exposes injustices such as torture and alleged war crimes committed by the United States in Afghanistan and Iraq.

But to others, he is a dangerous rebel who has undermined the security of the United States, accusing him of cozying up to authoritarian leaders such as Russian President Vladimir Putin and putting Americans' lives at risk.

Russia on Thursday slammed Britain's arrest of Assange as a move against democratic freedoms.

Assange's mother Christine tweeted that she had been advised that her son faces up to 12 months in a British prison.

"Our focus is as always to STOP a U.S. Extradition!" she wrote.

Assange's lawyer Jennifer Robinson also raised the possibility of her client being sent to face US justice.

"Just confirmed: #Assange has been arrested not just for breach of bail conditions but also in relation to a US extradition request," Robinson tweeted.

Assange is due to appear in a London court later Thursday and Australia has requested consular access.