Migrants rescued off Malta allowed to go to Europe 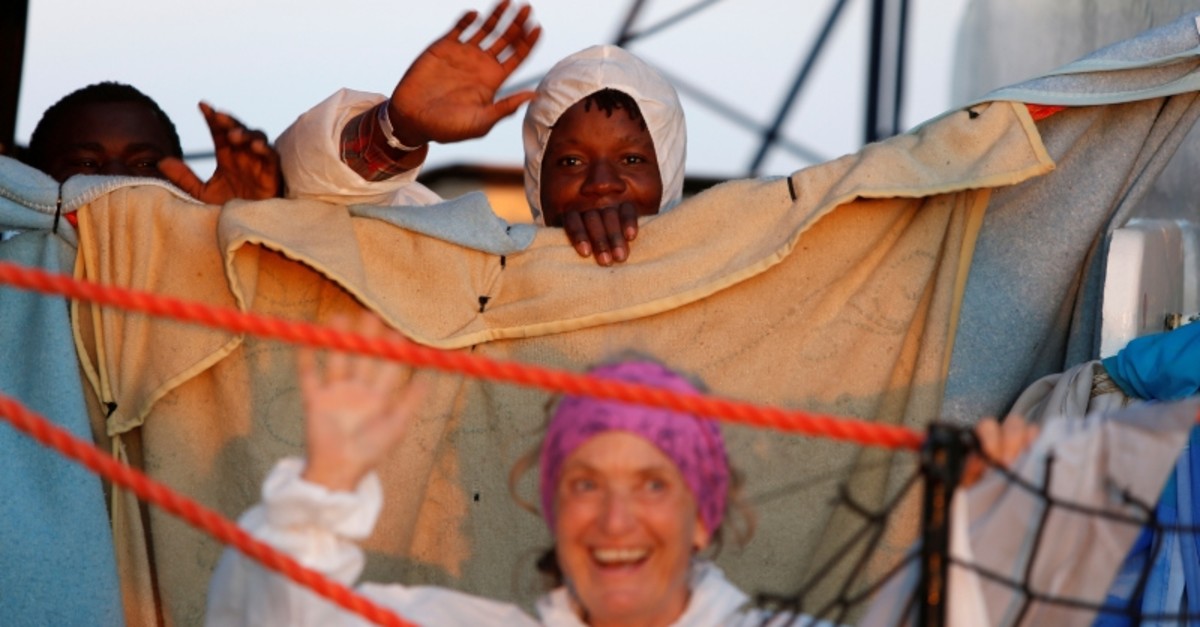 A crew member and rescued migrants wave on the migrant rescue ship 'Alan Kurdi', operated by German NGO Sea-Eye, wave after a delivery of supplies by the NGO Migrant Offshore Aid Station (MOAS) off the coast of Malta (Reuters Photo)
by Apr 13, 2019 1:47 pm

Dozens of migrants stuck on a ship since their rescue in the Mediterranean 10 days ago, will be allowed to disembark in Malta after four European countries agreed to take them in, Malta's prime minister said Saturday.

All 62 migrants on the Alan Kurdi ship "will be disembarked and redistributed between #Germany, #France, #Portugal and #Luxembourg," Joseph Muscat announced on Twitter.

"None will remain in Malta which cannot shoulder this burden alone," he added.

On Friday, French Interior Minister Christophe Castaner said Paris and other EU partners would "show solidarity" toward the migrants, who include 12 women and two children aged one and six.

The group was rescued on April 3 from a barely seaworthy vessel off Libya, and brought to the Italian island of Lampedusa.

But hardline Italian Interior Minister Matteo Salvini refused them entry, and said Berlin should take the migrants as they had been rescued by Sea Eye, a German NGO.

"It's their problem, they must deal with it," Salvini said, adding he had personally written to the ship's captain to warn the vessel must "not enter Italian territorial waters."

On Saturday, Salvini, of the far-right League party, expressed pleasure at the outcome.

"As promised, no immigrant from this German NGO (ship) will arrive in Italy. They will go to Germany or elsewhere," he tweeted.

"The Maltese are right to denounce the danger of the NGO's -- we stand beside them in the fight against human traffickers," added Salvini, who last month insisted Italian ports would be closed to migrant rescue NGOs operating in the Mediterranean in a bid to force other EU states to take them in.

Valleta expressed frustration at being caught in the middle.

"Once again, the European Union's smallest state has been put under pointless pressure in being tasked with resolving an issue which was not its responsibility," the Maltese government complained in a statement.

Last week, two of the women -- one of whom is pregnant -- turned down an offer to leave the ship with the children unless their husbands were allowed to join them.

The two women were ultimately evacuated midweek for health reasons to Valletta, leaving 62 people aboard. Late Friday a crewman was allowed off the ship for medical reasons.

The Alan Kurdi vessel is named after the three-year-old Syrian boy whose body washed up on a Turkish beach at the height of the European migrant crisis in 2015. Pictures of his lifeless body caused a global outcry over the migrants' plight.

Italy, with EU support, has also since 2017 been training the Libyan coast guard to intercept boats as part of a controversial deal that has seen migrant arrivals to Italy drop sharply.

Last month, Malta with its population of 450,000 received 108 migrants aboard a Palau-flagged tanker hijacked by three young Africans who diverted the boat from Libya.

A total of 356 people have died or gone missing in the Mediterranean so far this year, according to the International Organization for Migration (IOM).