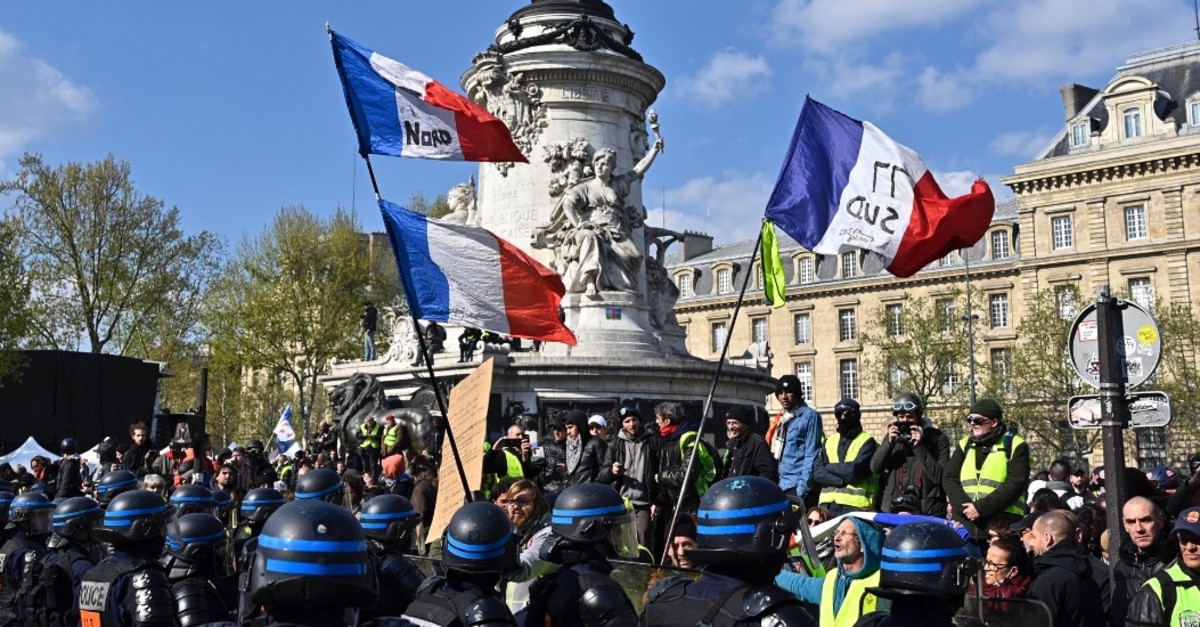 Tens of thousands of 'yellow vest' protesters took to the streets Saturday for the 22nd week running, rejecting measures to be unveiled by President Macron this week

President Emmanuel Macron presented measures based on the analysis of nationwide debates held to find a way of ending a social crisis that has lasted nearly five months.

Interior ministry figures put the number of demonstrators at 31,000 which would represent an increase on last week, when 22,300 were said to have turned out nationwide.

In Paris the numbers were 5,000 on Saturday and 3,500 last week, though protest organizers say all the official figures are seriously underestimated.

"Great National Debate, great blabla," and "Macron, we expect nothing from your announcements" read banners carried by protestors in Paris, where police backed up by a new law made 15 arrests and 5,885 identity checks, according to the local prefecture.

Demonstrators were barred from the Champs-Élysée Avenue, the site of widespread violence during previous protests.

Toulouse, southern France, was the movement's "capital" on Saturday, and the city where tension appeared to have risen the highest, with police firing tear gas and stun grenades, and protestors setting fire to construction equipment and a van.

They were the first since Macron signed into law legislation that gave se- curity forces greater powers at demon- strations but which opponents claimed violated civil liberties.

One measure banned protestors from covering their faces, but France's Constitutional Council, its highest constitutional authority, refused this month to give its green light to one of the most contentious parts of the leg- islation.

The bill, which was approved by lawmakers in February, aims to crack down on violence that has marred the "yellow vest" protest movement, which has rocked France since erupting in November.

Interior Minister Christophe Castaner on Thursday hailed the law as a "text which protects the French in the face of insecurity and violence." "It's a text that protects our institutions and our liberties," he wrote on Twitter. It would have given the authorities the power to ban from demonstrations any individual "posing a particularly serious threat to public order."

The "yellow vest" movement is now targeting April 20th as the date on which they are to respond to Macron's measures, which are expected to be announced in the coming days. In response to deep dissatisfaction with higher fuel taxes that have since been scrapped, the president might an- nounce an income tax cut or a plan to align pension payment increases with inflation. Other more symbolic measures might include a reform of the elite ENA school of administration, or an end to certain advantages enjoyed by former presidents and ministers.

Despite the origins of the yellow vest protests, their movement has evolved into an anti-elitist, anti-Macron character, which sees the president as a globalist oligarch, caring little about the middle and working classes as showcased by his former plans to raise taxes. This sentiment is not new in France, a country long-skeptical of elitists in power, as Macron had often been derogatorily linked with Marie Antoinette, the last Queen of France before the French 1789-1799 Revolution.