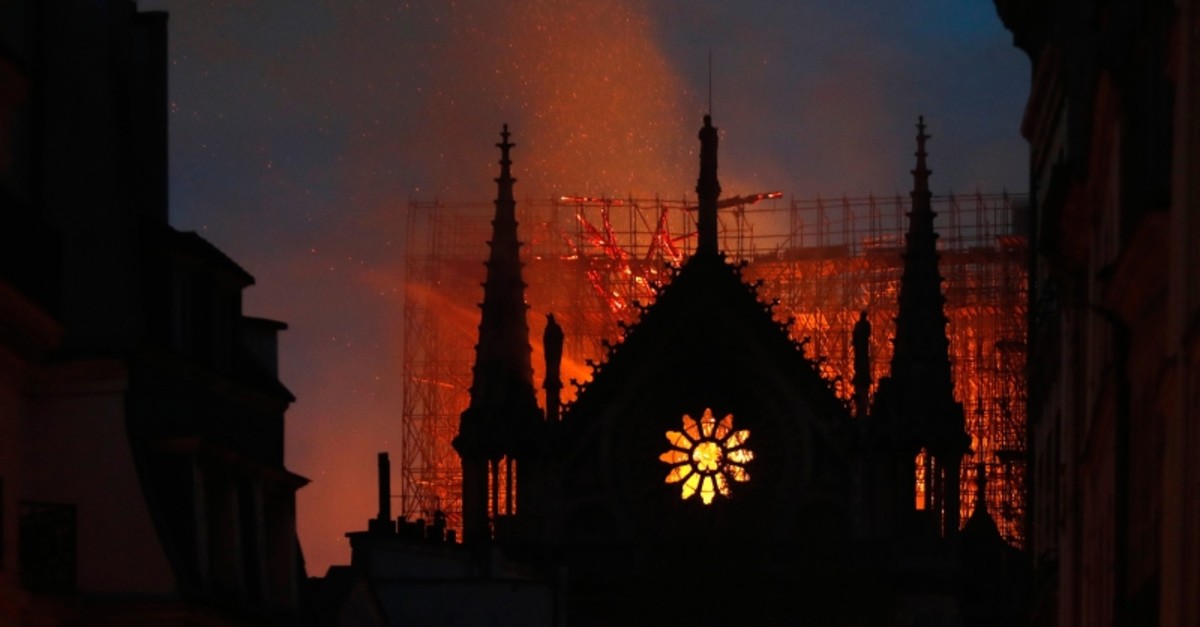 Notre Dame, a survivor of wars and revolutions, has stood for centuries as not merely the greatest of the Gothic cathedrals and a towering jewel of Western architecture.

It has stood, in the words of one shell-shocked art expert, as "one of the great monuments to the best of civilization."

And so it was that across the globe Monday, a stunned and helpless art world wept alongside the people of France as a massive fire ravaged the beloved cathedral.

"Civilization is just so fragile," said Barbara Drake Boehm, senior curator at the Metropolitan Museum of Art's medieval Cloisters branch in New York, her voice shaking as she tried to put into words what the cathedral meant. "This great hulking monument of stone has been there since 1163. It's come through so many trials."

"It's not one relic, not one piece of glass — it's the totality," she said, struggling to find words expansive enough to describe the cathedral's significance. "It's the very soul of Paris, but it's not just for French people. For all humanity, it's one of the great monuments to the best of civilization."

Boehm spoke shortly before the Paris fire chief announced that firefighters had been able to finally save the structure, including its two main towers. Much of the roof was destroyed.

The exact cause of the blaze wasn't known, but French media quoted the fire brigade as saying it was "potentially linked" to a 6 million euro ($6.8 million) renovation project on the church's spire and its 250 tons of lead. The Paris Prosecutor's office, which was investigating, said it was treating it as an accident.

International leaders voiced their sorrow and solidarity with the French people as a massive fire ravaged the iconic Notre-Dame Cathedral in Paris on Monday.

Here are some of the reactions delivered through statements and tweets.

"We are following the fire destroying the cathedral of Notre Dame in Paris with great sorrow," Foreign Minister Mevlüt Çavuşoğlu said in a tweet.

"The destruction of this masterpiece of architecture is a catastrophe for the entire humanity," he added.

"It is with very heavy hearts that we received the devastating news about the fire in Paris, France. The Notre Dame cathedral is not just a symbol of France but part of humanity's shared heritage," Turkey's presidential communications director Fahrettin Altun tweeted.

Notre Dame "belongs to the whole of humanity. It has inspired writers, painters, philosophers and visitors who have come from all round the world." — EU Commission head Jean Claude Juncker

"Notre Dame of Paris is Notre-Dame of the whole of Europe. We are all with Paris today." — EU Council President Donald Tusk

"We express our closeness with French Catholics and with the Parisian population. We pray for the firefighters and for all those who are trying their best to tackle this dramatic situation," a Vatican spokesman said.

Secretary General Antonio Guterres said: "Horrified by the pictures coming from Paris with the fire engulfing Notre-Dame Cathedral — a unique example of world heritage that has stood tall since the 14th century. My thoughts are with the people and government of France."

"So horrible to watch the massive fire at Notre-Dame Cathedral in Paris. Perhaps flying water tankers could be used to put it out. Must act quickly!"

The U.N. cultural agency said it "stands at France's side to save and restore this priceless heritage."

"Tonight we pray for the firefighters tackling the tragic Notre Dame fire — and for everyone in France and beyond who watches and weeps for this beautiful, sacred place where millions have met with Jesus Christ," the Archbishop of Canterbury Justin Welby said.

"Shocking images from Paris. An emblem, a cultural heritage of humanity and one of the most beautiful works of art in French history. Notre Dame is in flames. We hope no one is injured. Our thoughts are with Paris." — Austrian Chancellor Sebastian Kurz

"Notre Dame is one of the world's great treasures, and we're thinking of the people of France in your time of grief. It's in our nature to mourn when we see history lost -- but it's also in our nature to rebuild for tomorrow, as strong as we can."

"Notre Dame de Paris on fire, a huge emotion, Victor Hugo, a part of the history of France, of Europe. My thoughts and support for our French friends." — Belgian Prime Minister Charles Michel

"My thoughts are with the people of France tonight and with the emergency services who are fighting the terrible blaze at Notre-Dame Cathedral." —British Prime Minister Theresa May

Church of the Holy Land

"We pray that there will be no injuries, for the fire not to be intentional and for least possible damage to the Church. We express our solidarity with the Church in France, especially while we are during the Holy Week (that precedes Easter), and to wish this Church all the best to it and its faithful."

"The Arab Republic of Egypt affirms that it is following, with pain and sorrow, the Notre-Dame Cathedral catching fire, especially that this monument is of important cultural and historic significance for France and as part of the world's heritage," the Egyptian foreign ministry said.

"These horrible images of Notre-Dame on fire are painful. Notre-Dame is a symbol of France and of our European culture. Our thoughts are with our French friends." — German Chancellor Angela Merkel's spokesman Steffen Seibert

"The catastrophe of Notre-Dame in Paris deeply saddens us. It is not only a national catastrophe for France but also for Europe and for world heritage. Emmanuel Macron, we are by your side." — Greek Prime Minister Alexis Tsipras

"A blow to the heart for the French and for us all Europeans." — Italian Prime Minister Giuseppe Conte

"Sadness envelopes the world to see Notre-Dame Cathedral in Paris on fire. An indescribable catastrophe for heritage and for humanity. Lebanon is in full solidarity with its friends, the French people." — Lebanese Prime Minister Saad Hariri

"Heart-breaking to see #NotreDame Cathedral on fire. Our thoughts are with all those working to save this great symbol of European culture and with the people of France." — Secretary General Jens Stoltenberg

"Paris and France have been hit hard by a destructive fire at Notre-Dame, one of the most emblematic buildings on our continent. This devastating fire is felt throughout the whole of Europe." — Dutch Prime Minister Mark Rutte

"Heart-breaking to see Notre-Dame in flames in my favourite city Paris. Hope as much as possible can be saved." — Norwegian Prime Minister Erna Solberg

"In March it was Saint-Sulpice (church in Paris hit by fire), and today it is Notre-Dame. A tragedy for believers; a catastrophe for world culture and art." — Polish President Andrzej Duda

President Marcelo Rebelo de Sousa in a message to Macron lamented "a French, European and world tragedy", which struck "a major symbol of the collective imagination".

"We are following with alarm the news arriving from Paris of the fire at Notre Dame, one of the most beautiful cathedrals in the world. Sad news for our history and our universal cultural heritage." — Prime Minister Pedro Sanchez

"In the name of the federal council I wish to express our deep sadness at seeing right in the centre of Paris a monument so dear to the hearts of all ravaged by flames." — Swiss President Ueli Maurer

"We burned twice, but twice we rose stronger from the ashes. We are with you, friends; do not be afraid." — Venice's Fenice Opera House, hit by fire in 1836 and 1996

"Notre Dame has for centuries stood proud and tall as an inimitable icon, a symbol of the country's great culture and history. We pray that there are no injuries or loss of life in this tragedy, and that the destruction can be restored to allow this unparalleled structure to return to its position of symbolic majesty on the Parisian skyline."