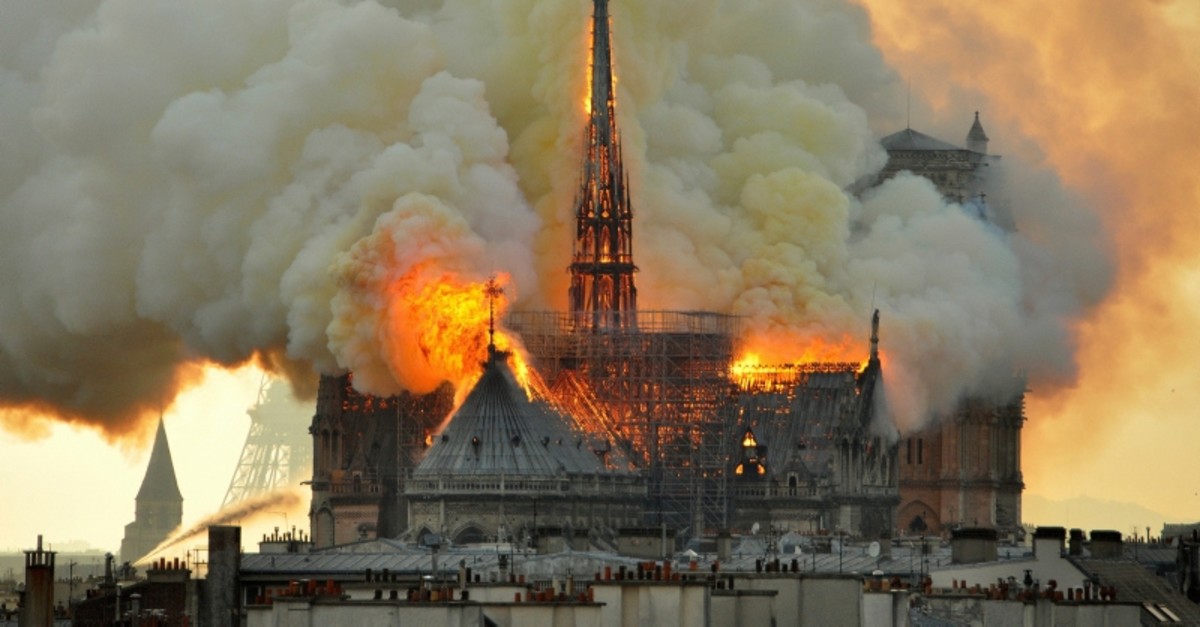 France on Wednesday announced it would invite architects from around the world to submit designs for replacing the spire of Notre Dame cathedral after a devastating blaze, as the government braced for a mammoth restoration challenge.

Prime Minister Edouard Philippe said the contest would decide whether the monument should have a new spire at all and if so, whether it should be identical to the fallen 19th-century model or be a wholly new design.

The world looked on in horror Monday as flames engulfed the 850-year-old gothic masterpiece seen as encapsulating the soul of Paris and the spire came crashing down.

Explaining that having no new spire at all was an option, Philippe noted that Notre Dame had been without a steeple for part of its history.

A descendant of the 19th-century architect Eugene Viollet-le-Duc, Jean-Marie Henriquet, 76, told AFP it would be a "great shame" not to rebuild the spire, adding this would equate to "amputating an element that belonged to it".

Philippe described the task of rebuilding it as "a huge challenge and historic responsibility", a day after President Emmanuel Macron said the entire restoration should be completed in just five years.

The bells of French cathedrals rung out at 1650 GMT on Wednesday to mark the exact moment when the fire started on Monday.

Macron had vowed to rebuild the iconic monument, the real star of Victor Hugo's "Hunchback of Notre Dame" by 2024 when France hosts the summer Olympics.

"We can do it," he said Tuesday, calling France "a nation of builders."

No sooner had firefighters extinguished the flames than pledges of donations towards restoring France's best-loved monument, which attracted 12 million visitors in 2018, began to pour in.

Within 24 hours, the pledges had reached more than 800 million euros ($900 million), with French business magnates and corporations jostling to outshine each other with displays of generosity.

But the slew of announcements raised eyebrows in France, with some leftist politicians arguing that the ultra-rich could best help protect the country's cultural heritage by fully paying their taxes — or helping the "human cathedral" of people in need.

The huge tax breaks available on the donations also caused some unease, prompting Francois-Henri Pinault, the billionaire CEO of the Kering luxury goods empire, to announce he would forfeit his rebate.

Pinault had led the pledges of donations starting Monday night with a promise of 100 million euros.

Billionaire Bernard Arnault and his LVMH luxury conglomerate, Total oil company and cosmetics giant L'Oreal also each pledged 100 million euros or more, while US tech giant Apple said it would give an unspecified amount.

Disney, which scored millions with the 1996 animated blockbuster "The Hunchback of Notre Dame" based on the Victor Hugo novel, said it would give $5 million.

US President Donald Trump, who was ridiculed by the French fire services after urging the use of water bombers to put out the fire at the fragile edifice, also pitched in with an offer of help.

Trump said he spoke to Pope Francis and offered "the help of our great experts on renovation and construction" to rebuild Notre Dame.

On Tuesday evening, Macron set out an ambitious timeline for restoring the landmark that took nearly two centuries to build and which has played a role in many of the defining moments of French history.

In a sign of the monument's resilience, the copper rooster that topped its spire was found Tuesday in the rubble of the roof, "battered but apparently restorable" according to a spokesperson for the culture ministry.

But the floor of the nave was left strewn with blackened roof beams and chunks of the collapsed upper vaulting.

Experts have warned that full restoration could take longer than five years, with one of the biggest tasks involving replacing the precious oak "forest" that propped up the roof.

"I'd say decades," Eric Fischer, head of the foundation in charge of restoring the 1,000-year-old Strasbourg cathedral, told AFP.

Investigators trying to determine the cause of the blaze are questioning workers who were renovating the steeple, an operation suspected of accidentally triggering the blaze.

The police have already spoken to around 30 people from five different construction companies.

Public prosecutor Remy Heitz has said the investigation threatened to be "long and complex".