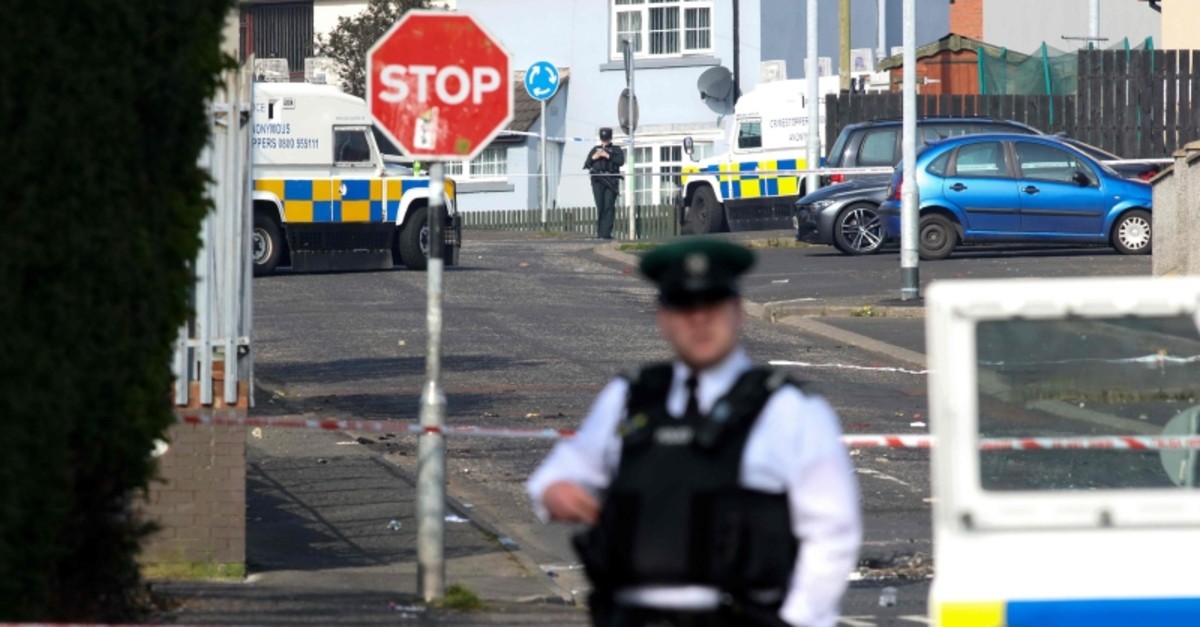 Police secure the area where a journalist was fatally shot amid rioting overnight in the Creggan area of Derry (Londonderry) in Northern Ireland on April 19, 2019. (AFP Photo)
by Compiled from Wire Services Apr 19, 2019 12:25 pm

Police in Northern Ireland said Friday the dissident republican group the New IRA was probably responsible for the fatal shooting of a journalist during overnight rioting in the city of Londonderry.

The Police Service of Northern Ireland said 29-year-old journalist and author Lyra McKee died after she was shot during rioting in the Irish nationalist Creggan area following a raid by police, who said they were trying to prevent militant attacks planned for the Easter weekend. At least 50 petrol bombs were thrown and two cars set on fire.

"Officers quickly administered first aid before transporting her in the back of a Land Rover to hospital. Tragically she died from her injuries."

"We believe this to be a terrorist act. We believe this has been carried out by violent dissident republicans," Hamilton added, saying the New IRA group, which has been responsible for several attacks in recent years, was most likely behind the killing.

A murder investigation has been launched but there have been no arrests. Hamilton appealed for calm to prevail on Easter weekend.

He said the shooting happened when police were searching for munitions and firearms after tips that terror attacks were planned for the Easter weekend.

An eyewitness told the BBC that a gunman fired indiscriminately into a crowd during riots on the crowded Creggan housing complex.

The New IRA is a small group of republicans who reject the 1998 Good Friday agreement that marked the Irish Republican Army's embrace of a political solution to the long-running violence known as "The Troubles" that claimed more than 3,700 lives.

The group is also blamed for a Londonderry car bombing that did not cause any injuries in January. It is regarded as the largest of the splinter dissident groups still operating and has been linked to several other killings in the past decade.

There has been an increase in tensions in Northern Ireland in recent months with sporadic violence, much of it focused in Londonderry, also known as Derry.

The border between Northern Ireland and the Irish Republic has been one of the thorniest issues in Brexit negotiations between the U.K. and EU.

A deal reached by May and EU officials has been thrice rejected by the House of Commons mainly due to the backstop clause-a measure to avoid a hard Irish border.

Northern Ireland voted to remain in the EU in a 2016 referendum, and it is feared that the Brexit process could trigger enmity in the region.

U.S. House of Representatives Speaker Nancy Pelosi led a congressional delegation to the city earlier on Thursday, as part of a trip to show support for the peace agreement politicians in Washington helped to broker.

McKee, the victim of the shooting, rose to prominence in 2014 with a blog post describing the struggle of growing up gay in Belfast, the capital of Northern Ireland. She had recently signed a contract to write two books one of which was about the disappearance of young people during three decades of sectarian violence in Northern Ireland. She was described by publisher Faber as a rising star of investigative journalism.

Prime Minister Theresa May called the incident "shocking and truly senseless." She wrote on Twitter: "My deepest condolences go to her family, friends and colleagues. She was a journalist who died doing her job with great courage."

"I am shocked and saddened at the tragic news that a young woman has been shot dead by so-called dissidents in the Creggan estate tonight," O'Neill said.

She said: "The murder of this young woman is a human tragedy for her family, but it is also an attack on all the people of this community, an attack on our peace process, and an attack on the Good Friday Agreement.

"I unreservedly condemn those responsible for killing this young woman.

"We will remain resolute in our opposition to the pointless actions of these people who care nothing for the people of Derry."

"No one wants to go back. My thoughts are also with the brave officers who stood in defence of their community."

Britain's Secretary of State for Northern Ireland Karen Bradley said she was "deeply shocked and saddened" by McKee's death.

Seamus Dooley, Irish secretary of the National Union of Journalists, he was shocked by the murder of a journalist "of courage, style and integrity."

He offered sympathy to "her partner, her family and many friends."

The Troubles -- an era of conflict between the British government and pro-British paramilitaries on one side and Irish republicans and nationalists on the other -- ended in 1998 after the Belfast Agreement put an end to decades of armed struggle in the divided U.K. region of Northern Ireland.

The U.K. and the Republic of Ireland signed the deal, brokered by the U.S. and eight political parties in Northern Ireland, on April 10, 1998.

The agreement committed the U.K. and Irish governments to respect the "principle of consent."

If a vote on Irish unification got a positive result, the agreement specifies that "it will be a binding obligation on both governments to introduce and support in their respective parliaments' legislation to give effect to that wish."