Rivals in Ukraine's presidential runoff debate at stadium in Kiev 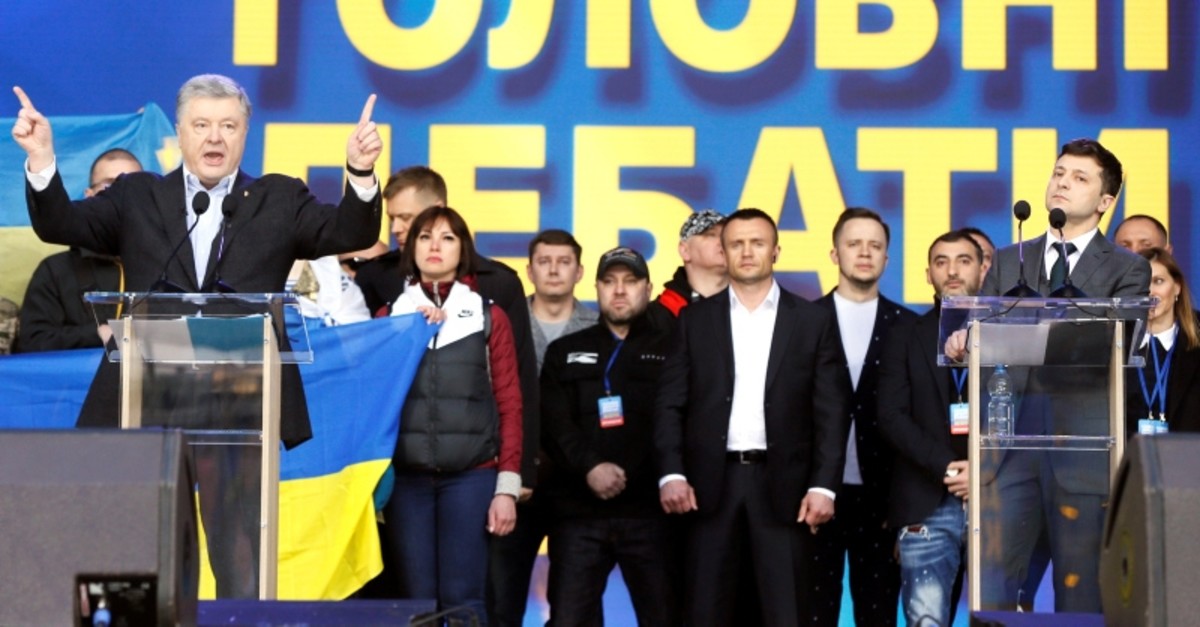 A comedian who is the front-runner in Ukraine's presidential race and the incumbent fighting to retain his job traded accusations in a debate at a sports stadium Friday, just two days before the election.

President Petro Poroshenko, who is trailing in opinion polls ahead of Sunday's presidential runoff, accused his rival, 41-year-old comic actor Volodymyr Zelenskiy, of lacking the political experience needed to keep Ukraine on its pro-Western course and resist Russia's attempts to draw the country back into its orbit.

While Poroshenko charged that his rival lacks a clear program, Zelenskiy shot back, calling the president "a wolf in sheep's clothing."

Zelenskiy, who is widely popular for playing a Ukrainian president fighting corruption in a popular TV sitcom, held the Ukrainian leader responsible for the nation's economic woes and endemic corruption. He insisted that he would continue pushing Ukraine to further integrate into the West.

The debate was watched by some 60,000 people who packed the nation's largest sports arena in Kiev, backing their candidates with enthusiastic chants or booing their opponents.

Zelenskiy tried to put Poroshenko on the defensive, showering the billionaire candy tycoon-turned-president with questions about his business assets and associates of his who have been accused of corruption.

"Could we imagine back then that a new way of life would in fact be a fight for survival?" Zelenskiy said, referring to the country's sharp plunge in living standards since the 2014 vote.

"I'm not a politician, I'm a simple man who has come to break that system," he said, echoing his sitcom character, a schoolteacher suddenly thrust into the presidential seat. "I'm the result of your promises and your mistakes."

Poroshenko shot back, arguing that the actor has failed to spell out his program and pointing at his business ties with self-exiled billionaire tycoon Ihor Kolomoyskyi, the president's archrival.

Poroshenko charged that Zelenskiy's victory would benefit Russia, which annexed Ukraine's Crimean Peninsula in 2014 and has backed separatist rebels in Ukraine's east ever since in fighting that has left 13,000 people dead.

"He would be a weak head of state unable to stand up to (Russian President Vladimir) Putin," Poroshenko said. "An actor can't wage a war against Russia."

Zelenskiy sought to turn the tables on Poroshenko, accusing him of maintaining backdoor channels with the Kremlin and continuing to market his candy in Russia despite the bitter tug-of-war between the two neighbors.

"I will uphold Ukraine's European choice," he insisted.

At some point, both candidates came down to their knees to ask for forgiveness of those who lost their relatives in the five years of fighting in the east.

Prior to the debate, Poroshenko rallied thousands of his supporters at the capital's Independence Square, which was the heart of Ukraine's 2014 opposition protests that ousted the nation's former Russia-friendly president.

Lyudmila Soloveyko, a 56-year-old schoolteacher who went to the rally, said she's grateful to Poroshenko for "opening the door to Europe for Ukrainians," referring to the EU decision to scrap visas for traveling Ukrainians, which Poroshenko had lobbied for.

Zelenskiy has avoided a traditional political campaign, touring the country with his comedy show instead. In his rare interviews, he has pledged to continue the push for close ties with the EU and NATO but also spoke out for more active efforts to reintegrate the rebels in the east back into Ukraine's fold.

Zelenskiy's supporters scoffed at the president's claim that the actor would be easy prey for the Kremlin and pointed at the economic woes and corruption during Poroshenko's time at the helm.

"We have got tired of the old politicians who are good at nothing but talk," said 54-year-old sales clerk Yevgenia Ostroshitskaya. "Life only has been getting worse. Let Zelenskiy give it a try, he has done it well in the movies."

Zelenskiy won 30% of the vote in the March 31 first round vote while Poroshenko got 16%, and the gap has widened as Sunday's runoff has approached.

A poll released Thursday by the Rating agency suggested Zelenskiy has 58% support, while Poroshenko has just 22%. The poll of 3,000 people had a margin of error of 1.8 percentage points.