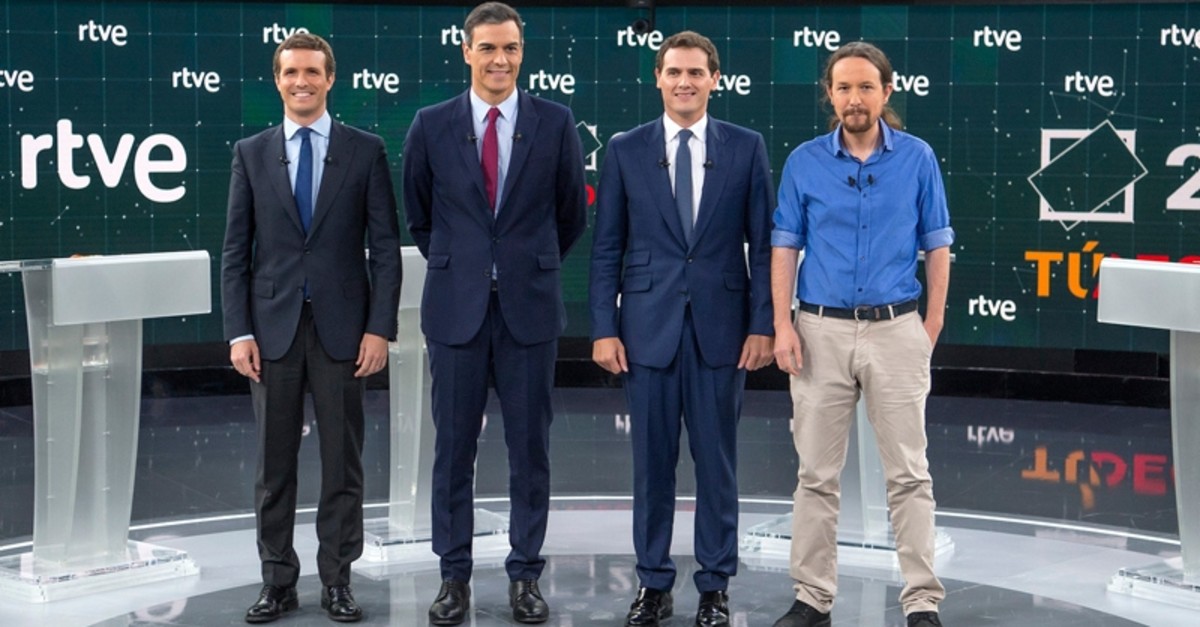 Four contenders to become the next Spanish prime minister exchanged heated attacks Monday night while slipping in campaign pledges during the first of two televised live debates heading into the weekend general election.

Spain's parliamentary election on April 28, one of the country's most divisive since its return to democracy in the late 1970s, is being fought more on emotional and identity issues, such as Catalonia's botched independence bid than on the economy.

None of the four candidates emerged as a clear winner from the late-night debate during which all except the anti-austerity Pablo Iglesias appeared quite tense, trading barbs and accusing the others of lying, being out of touch with reality and not doing enough to handle corruption cases within their respective parties.

The debate on Spanish public television and the second on Tuesday on a private broadcaster are seen as key in mobilizing nearly one-third of voters who polls say remain undecided.

Prime Minister Pedro Sánchez's Socialist Party is leading voting predictions in its bid to stay in office but short of a majority to form a government alone. But he refused to say which party or parties he might consider for a governing coalition if the Socialists win the voting in Sunday's election.

The question was repeatedly raised by Iglesias of the far-left Unidas Podemos party, who 10 months ago backed Sánchez's party in a no-confidence motion that removed the administration of the conservative Popular Party and put the Socialists in power.

Sánchez said only that he would prefer for the Socialists to win an "ample majority" and then have some independent "prestigious" ministers in his Cabinet.

He also criticized the center-right Citizens (Ciudadanos) party for urging voters to elect a "sanitary cordon" to isolate the Socialist party, saying Citizens is seeking a right-wing government, even if that requires the backing of the far-right Vox party.

"The only alternative to the three right-wings is the Socialist party," Sánchez argued.

He said a Popular Party (PP)-Citizens government would put "the extreme right at the wheels," referring to the political coalition that late last year ousted the Socialists from power in Spain's most populous region, Andalusia.

Santiago Abascal, the leader of surging national-populist party Vox, was left out of the television debates after Spain's electoral board ruled that it lacks representation in the parliament and other smaller parties would also need to be invited in line with the parliament that emerged from the last elections.

Having won 12 seats in Andalusia's regional parliament, however, the ultra-nationalist and anti-immigration party's support was key to helping the PP and Ciudadanos take power in the southern region that had traditionally been a socialist stronghold.

Sanchez warned that could happen at a national level.

"I thought that (Donald) Trump wouldn't win and he won. I thought Brexit wouldn't happen and it did," he said.

"I thought that in Andalusia the PP, Ciudadanos and the far-right wouldn't reach agreements and they did."

Most polls predict the Socialists and Unidas Podemos will emerge with the biggest block of seats but fall short of the 176 needed for a majority in the 350-member lower house of parliament. If that proves accurate, the left-wing coalition would need to seek support from smaller parties, including Basque and Catalan nationalists.

Catalonia's attempt to secede from Spain in 2017 has opened the gravest political crisis in decades. The separatist defiance has also prompted the rise of Spanish nationalism, giving wings to Vox, the party that could get around 11% of the votes, according to a mid-March poll by CIS, the country's official polling institute.

Sanchez faced an onslaught of criticism from his right-wing rivals over Catalonia's secession crisis.

"Those who want to break up Spain have their favorite candidate in Sanchez," Casado said, standing behind a lectern in the studio, the three other candidates in a semi-circle next to him.

"I want a prime minister who doesn't kneel down in front of those who want to break Spain," added Rivera, a framed photo of Sanchez talking to Catalonia's separatist leader Quim Torra on his lectern in front of him.

The northeastern region's independence drive is an explosive issue ahead of these early elections, which Sanchez called after his minority government failed to get support for its 2019 budget.

Casado and Rivera both accuse Sanchez of betraying Spain for attempting to negotiate with Catalan separatists since he came to power in June after ousting then conservative Prime Minister Mariano Rajoy with a no-confidence motion.

They also accuse him of cozying up to Catalan separatist lawmakers in the national parliament who supported the motion to oust Rajoy and were key to propping up Sanchez's minority government.

Their refusal to back the budget prompted the early elections.

Sanchez defended himself, stressing he would never give his consent to an independence referendum.

But he insisted dialogue was the way forward to avoid a repeat of a failed secession bid in October 2017 marked by an illegal referendum.

Exasperated, he said: "I've been putting up with all these lies for 10 months -- that I've agreed to a referendum, that I've sold Spain..."

Equally exasperated was Iglesias, whose far-left party worked with Sanchez in his 10 months in power.

"This debate is being watched outside Spain," he said, the only candidate to opt for a casual shirt and trousers rather than a suit and tie.

"I think this debate is serious enough for us not to show each other photos or throw paper at each other, and talk with a bit of seriousness."

The 90-minute debate allowed the four party leaders to share some of their proposals for boosting economic growth, modifying taxes and repairing the country's failing pension system. But it focused on testing the candidates' rhetoric abilities.

Albert Rivera of the Citizens party struck a surprise note by attacking his most likely partner in any conservative coalition government, reminding Pablo Casado how his Popular Party had been tainted by years of political scandals. In response, Casado said he was chosen as his party's president "to turn a page on what could have happened in past times."

Nearly 37 million Spaniards are eligible to vote in Sunday's election, the third in less than four years as a result of the recent fragmentation and polarization of politics in Spain.