Zelenskiy victory in Ukraine raises questions over relations with Russia 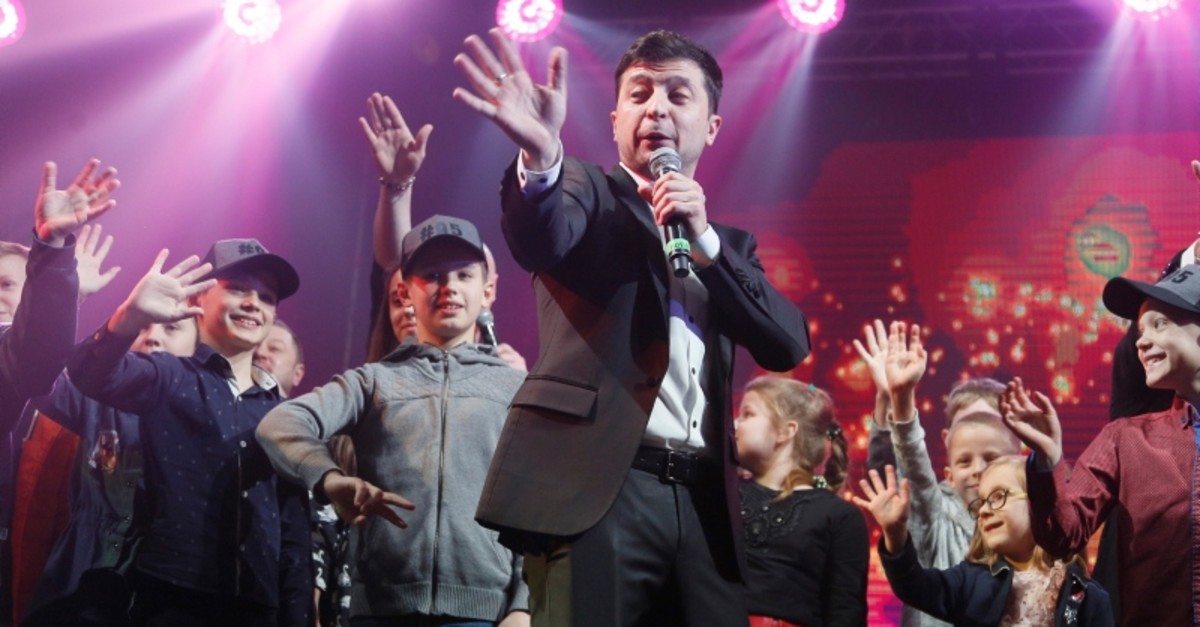 In this file photo taken on Friday, March 29, 2019, Volodymyr Zelenskiy, Ukrainian actor and candidate in the upcoming presidential election, hosts a comedy show at a concert hall in Brovary, Ukraine (AP Photo)
by Daily Sabah with Wires Apr 23, 2019 12:05 am

After near final results show Volodymyr Zelenskiy, a comedian, winning Sunday's presidential election by a landslide, questions are being raised over whether he would open a new chapter in relations between Russia and Ukraine after years of tensions.

Unlike most of the elections in Ukraine's post-Soviet history, Zelenskiy appears to have won both in Ukraine's west and east, which have been traditionally polarized. One of the campaign slogans of the popular television comedian who has no previous political experience was to unify Ukraine, which has been torn by bitter debates over its identity as well as the separatist conflict in the east that is fueled by neighboring Russia.

Even with a landslide win to give him a powerful mandate for change, Zelenskiy has daunting challenges ahead. The simmering, deadly conflict in eastern Ukraine and the conundrum over Russia's 2014 annexation of Crimea are likely to dominate the agenda of the man who up until now has only played the president in a TV sitcom. Zelenskiy, a Russian speaker from central Ukraine, has promised to step up efforts to re-integrate the east back into Ukraine's fold but has offered no details on how he is going to do that.

Officials in Moscow sounded cautiously optimistic but also condescending about Zelenskiy's victory. The Kremlin said yesterday that it was too early to speak about possible cooperation with the Ukrainian President-elect Zelenskiy, but added that Moscow respected the choice of the Ukrainian people. "It's too early to talk about President [Vladimir] Putin congratulating Mr Zelenskiy, or about the possibility of working together. It will only be possible to judge based on real actions," Kremlin spokesman Dmitry Peskov said. Russian Prime Minister Dmitry Medvedev expressed hope that ties with neighboring Ukraine could be salvaged as a new Ukrainian president has been elected. "There is still a chance for Ukraine to improve its relations with Russia. What will it take? Honesty, as well as a pragmatic and responsible approach with due account for all the current political realities in Ukraine, primarily in the east of the country," Medvedev said.

During former President Petro Poroshenko's term, mediating efforts between European countries, Ukraine and Russia did not lead to any significant improvement in ending the years-long pro-Russian separatist rebellion in eastern Ukraine. The peace talks could not produce a breakthrough over issues relating to the settlement of the Ukraine crisis. The gap between the parties is still too wide to reconcile, therefore conflicting interests at the heart of the Ukrainian crisis are preventing a sustainable settlement between Kiev and the eastern Ukrainian separatists.