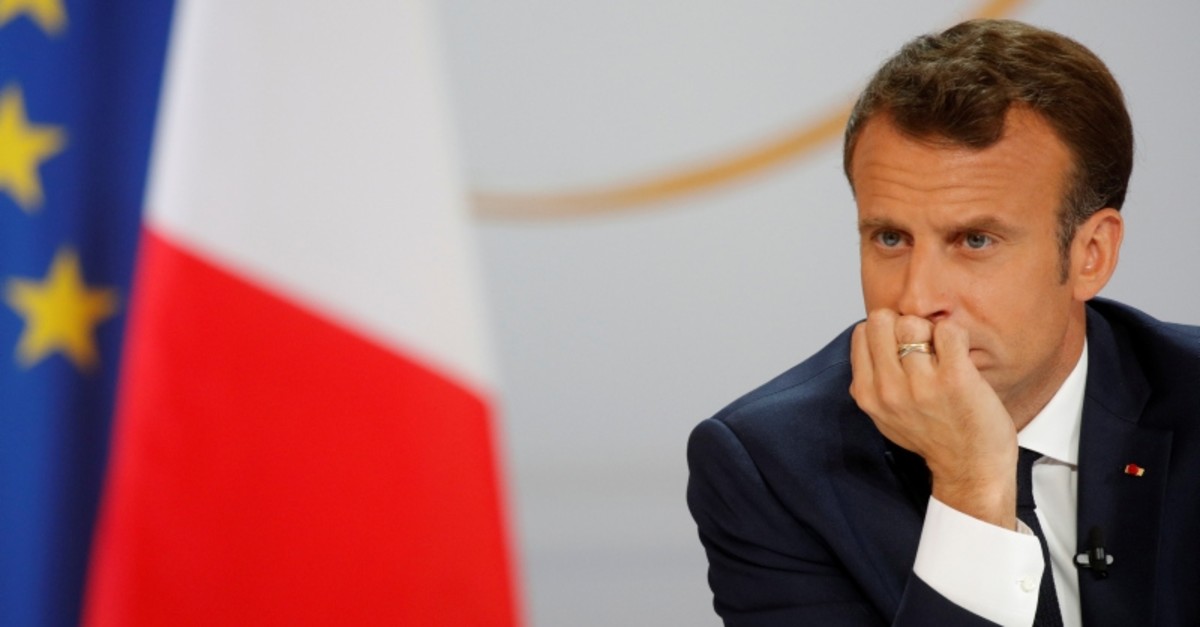 French President Emmanuel Macron listens to a question during a news conference to unveil his policy response to the yellow vests protest, at the Elysu00e9e Palace in Paris, France, April 25, 2019. (Reuters Photo)
by Associated Press
Apr 26, 2019 1:22 am

French President Emmanuel Macron announced tax cuts for middle-class workers and plans for a more representative parliament Thursday as part of a promised response to the weekly yellow vest protests that damaged his presidency.

In a nationally televised speech followed up by a news conference, the French leader also said France and Europe must do more to fight illegal migration.

Macron spoke to the nation from the presidential Elysée Palace after he convened nationwide meetings where communities could debate how to address economic concerns raised by the yellow vest movement, including high taxes, unemployment and stagnant wages.

He unveiled measures to boost pensions under 2,000 euros ($ 2,226) and said he would propose an overhaul of France's retirement system during the summer. But he said the "best solution" for financial disparities is "to cut taxes for a maximum number of citizens and especially those who are working, especially the middle-class."

The president also vowed to introduce "deep changes" to France's system of democracy. One is easing the rules for organizing public referendums so people have another outlet for grievances besides the street protests that have convulsed the country for five months.

He pledged to reduce the number of lawmakers in parliament by about 30% and to change how seats are filled so the national legislature better reflects the diversity of France's political parties. France's parliamentary election system currently is designed to give the winning party a strong majority, putting smaller parties at a disadvantage.

But Macron warned that there comes a time for hard choices. He said he thinks illegal immigration is weighing on Europe. The European Union should be "strong" by both protecting its borders and taking in some asylum-seekers from countries where their lives are at risk.

In a move to counter the yellow vest movement's portrayal of him as elitist, Macron said he decided to do away with France's Ecole Nationale d'Administration, the influential college that trains top civil servants and politicians.

The centrist Macron, a former investment banker, is himself an ENA graduate.

Macron apologized for some comments that were perceived as arrogant, such as his telling an unemployed man he could find a job if he "crosses the street" and advising a retiree not to complain.

"I may have given the impression to give orders all the time and be tough. Which I regret," he said.

At the same time, he said he would keep pushing pro-business policies opposed by labor unions and the yellow vest movement.

"I asked myself, 'Were we wrong?' I think the total opposite. I think the ongoing changes, the necessary changes we have to do in our country mustn't be stopped," Macron said. "They haven't been quick enough for some, not radical enough, not human enough."

Some activists who have been involved in the yellow vest movement said they were disappointed with Macron's response to their demands for economic relief for the country's working classes.

Paris region activist Thierry-Paul Valette tweeted after Macron outlined his proposals that the president spoke like "a supreme chief and doesn't seem to understand that he should show modesty."

Once-prominent yellow vest activist Ingrid Levavasseur, who scaled back her participation amid the movement's internal divisions and protest violence, told The Associated Press she found Macron's response "not at all satisfactory."

"The expectations are so enormous that it was bound to be disappointing," she said.

The yellow vest movement started to oppose a fuel tax increase and was named after the fluorescent jackets French motorists are required to keep in their cars. Attendance at protests has dwindled, but movement activists are organizing the 24th straight weekend demonstrations for Saturday.

Leaders from Macron's party and government plan to meet Monday to develop a timetable for implementing the new measures. Macron made some concessions to the protests earlier, such as abandoning the fuel tax hike. He also scrapped a tax increase for retirees and introduced monthly bonuses of 100 euros ($113) for people earning the minimum wage.

But Macron has repeatedly refused to meet one of the protesters' main demands: reintroducing a wealth tax for France's richest people, He refused again Thursday, saying he was aiming to keep investments in the country.