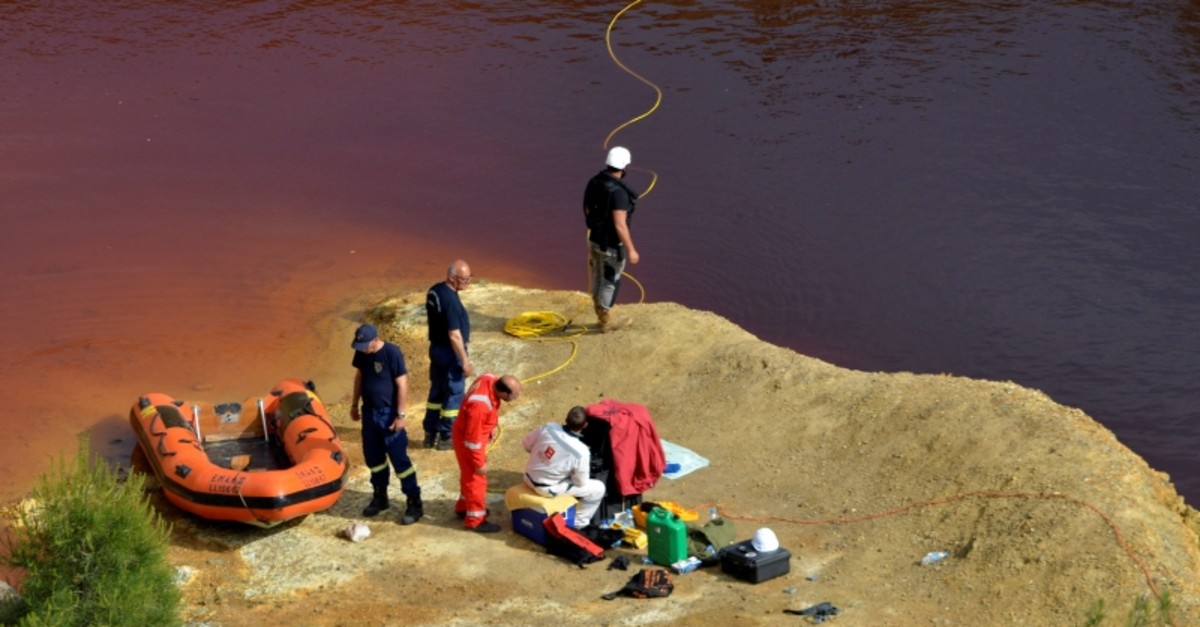 Greek Cypriot investigators hunting for bodies dumped by a suspected serial killer found a suitcase containing the decomposing remains of a woman at the bottom of a man-made lake Sunday.

The body is believed to be that of one of the victims of a Greek Cypriot military officer who has confessed to killing seven foreign women and girls. The suitcase was weighed down by a concrete block, the chief of Greek Cyprus' Criminal Investigation Department said.

Senior Inspector Neophytos Shailos said a coroner who examined the body at the scene said it was in an advanced stage of decomposition. He said a battery of tests and scientific examinations will be conducted to determine the woman's identity.

Tourists stumbled upon the first victim, discovered by chance in a disused mining shaft, two weeks ago.

Authorities focused their search on the lake about 32 kilometers (20 miles) west of the capital, Nicosia, after the suspect — a 35-year-old army captain — told investigators that he put the bodies of three of his victims into suitcases and threw them into the toxic lake, part of a now-defunct copper pyrite mine.

Those victims are believed to be Maricar Valtez Arquiola, 31, from the Philippines; Florentina Bunea, 36, from Romania; and Bunea's 8-year-old daughter, Elena Natalia. Arquiola has been missing since December 2017, while the mother and daughter vanished in September 2016.

Shailos said a coroner who carried out a preliminary examination at the scene determined that the body is of an adult female.

The retrieved suitcase is one of two that were located in the lake Saturday. Shailos said authorities won't retrieve the second one immediately, but will continue scouring the lake for the third suitcase.

The development is the latest in a rapidly unfolding case that has shocked Cypriots who fear a serial killer has been preying on foreign women who came to work in the east Mediterranean island nation.

The case came to light with the April 14 discovery of the bound body of 38-year-old Mary Rose Tiburcio, from the Philippines, down a flooded shaft near the lake.

The discovery triggered a homicide investigation that led to the captain's arrest before a second woman's body — thought to be that of 28-year-old Arian Palanas Lozano, also from the Philippines — was found in the mineshaft on April 20. Police said the suspect admitted killing them both and they believe that he also killed Tiburcio's 6-year-old daughter, Sierra, who remains missing.

The scope of the case expanded when the suspect confessed Thursday to killing a total of five women and two of their daughters.

The suspect, who hasn't been named because he has not been charged yet, also led investigators to a military firing range where the decomposed remains of a woman were discovered down a pit. Officials said the remains could be those of Ashita Khadka Bista, from Nepal.

Police initially tracked down the suspect through Tiburcio's computer messages on a dating site. Investigators said the two had had a six-month relationship before Tiburcio and her daughter disappeared in May 2018.

A court heard that Tiburcio's roommate had pleaded with her not to take along her daughter to a pre-arranged rendezvous with the suspect on the night of her disappearance. But Tiburcio said the suspect insisted that she bring her daughter along so that the child could play with his two small children.

He faces charges including premeditated murder and kidnapping for alleged crimes dating back to Sept. 30, 2016.

Police Chief Zacharias Chrysostomou has ordered an internal probe to determine whether investigators had failed to properly investigate the women's disappearances, amid public criticism that authorities did little to search for the women when they were reported missing.