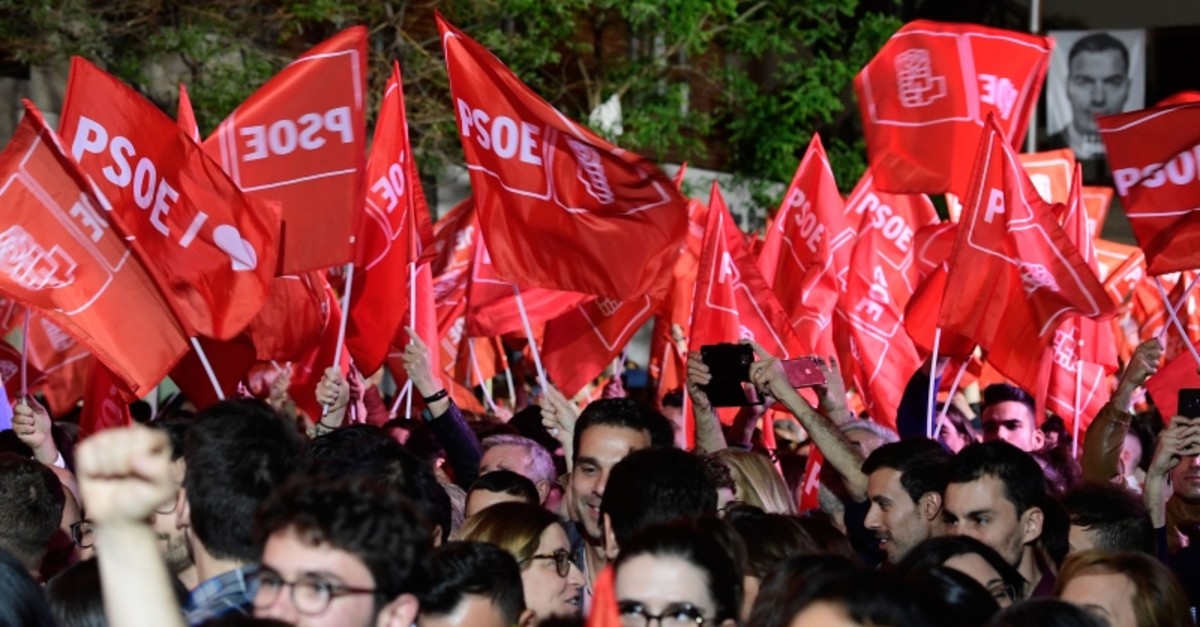 Supporters of ruling Spanish Socialist Party (PSOE) wave flags as they celebrate in front of the party headquarters in Madrid after Spain held general elections on April 28, 2019. (AFP Photo)
by Compiled from Wire Services Apr 28, 2019 11:17 am

With 95% of votes counted, the Socialist Party led by Spain's outgoing Prime Minister Pedro Sanchez is set to win the national elections in Spain.

The Socialists led with 123 seats in the 350-seat parliament with the far-left Unidas Podemos on 42, leaving the two parties combined 11 seats short of the 176 seats needed to gain a majority.

It appears that the left-wing bloc will need to join forces or win support from separatist parties to form a government.

The right-wing mainstream conservative PP party was pegged at just 65 seats, with center-right Ciudadanos on 57 and far-right Vox on 24.

Turnout in Spain's national election stood at 60.7% at 6 p.m. (1600 GMT) on Sunday, according to the interior ministry compared to 51.2% recorded at the same time during the previous election in June 2016.

After a tense campaign dominated by issues such as national identity and gender equality, the likelihood that any coalition deal will take weeks or months to be brokered will feed into a broader mood of political uncertainty across Europe.

At least five parties from across the political spectrum have a chance of being in government and they could struggle to agree on a deal between them, meaning a repeat election is one of several possible outcomes.

Voting started at 9 a.m. (0700 GMT) and ended at 8 p.m. in mainland Spain in the country's third national election in four years, each of which has brought a further dislocation of the political landscape.

With the trauma of military dictatorship under Francisco Franco, who died in 1975, still fresh in the memory for its older generation, Spain had long been seen as resistant to the wave of nationalist, populist parties spreading across much of Europe.

But this time Vox will get seats, boosted by voter discontent with traditional parties, its focus on widespread anger at Catalonia's independence drive, and non-mainstream views that include opposing a law on gender violence it says discriminates against men.

One of several unknowns is how big an entry Vox will make in parliament's lower house, with opinion polls having given a wide range of forecasts and struggled to pin down the party's voter base.

The high number of undecided voters - in some surveys as many as four in 10 - has also complicated the task of predicting the outcome, as have the intricacies of a complex electoral system under which 52 constituencies elect 350 lawmakers.

That system is untested in Spain's new political era, marked by the definitive end of the long-held dominance of the PP and the Socialists.

Voters in the depopulating rural heartlands - many of whom are old and may well feel little direct connection to the country's young, male, urban political elite - are of particular importance.

They proportionally elect more lawmakers than the inhabitants of big cities, but at the same time the cut-off point for parliamentary representation there is trickier to reach, making the outcome harder to predict the more parties there are.