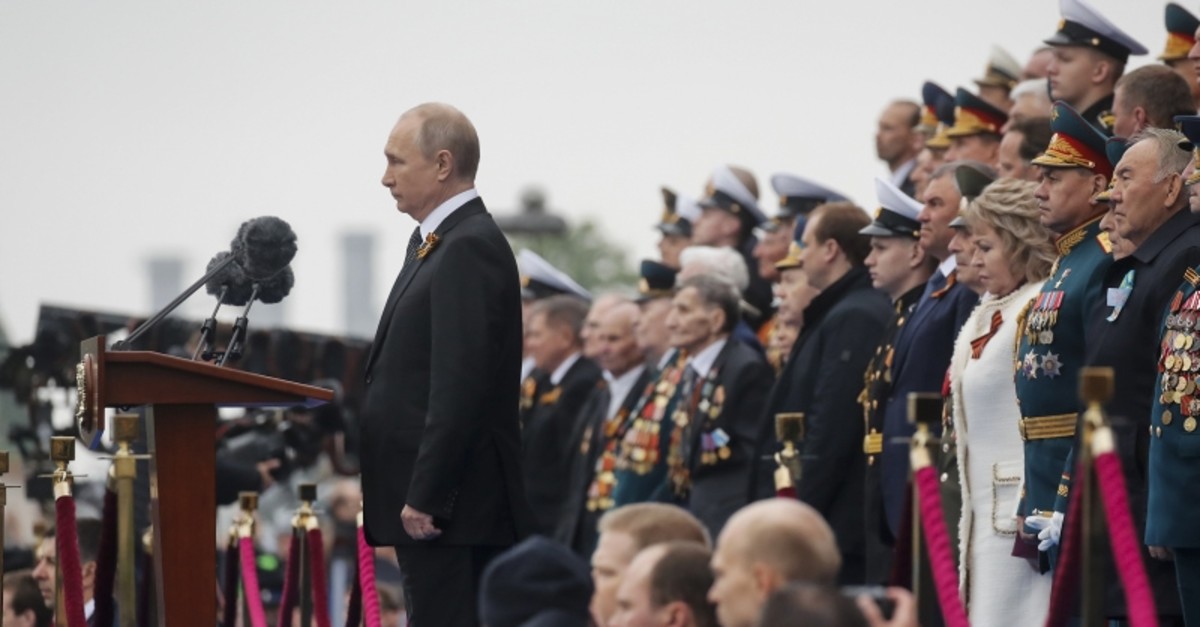 Russian President Vladimir Putin observes a minutes of silence during the Victory Day parade, which marks the anniversary of the victory over Nazi Germany in World War Two, in Red Square in central Moscow, Russia May 9, 2019. (Reuters Photo)
by Compiled from Wire Services May 09, 2019 4:20 pm

Russian President Vladimir Putin told the annual military Victory Day parade in Red Square on Thursday that the country will continue to strengthen its armed forces.

The parade marked the 74th anniversary of the defeat of Nazi Germany. It included about 13,000 servicemen and 130 pieces of military equipment, ranging from a T-34 tank — renowned for its effectiveness in World War II — to lumbering Yars ICBM launch units.

The display of raw military power is also designed to show the world and potential buyers of military hardware how a modernization program has changed the face of the Russian military and arms industry.

For the second time in three years, the parade did not conclude with an aerial display of helicopters and warplanes speeding above the square. Russian news reports said the cancellation was due to heavy clouds.

Putin, whose term ends in 2024, reviewed the parade from a tribune packed with Soviet war veterans, some of whom wore rows of campaign medals and clutched red roses.

"We have done and will do everything necessary to ensure the high level of readiness of our armed forces," Putin said. "We call on all countries to recognize our common responsibility to create a security system that is effective and equal for everyone."

He added: "At the same time, Russia is open for cooperation with all who are ready to resist terrorism, neo-Nazism and extremism."

Ahead of the anniversary of the end of World War II in Europe, at least 30 suspected members of a neo-Nazi group were detained in recent raids in central Russia, earlier this week.

The group, believed to have operated in the Moscow, Vladimir and Ryazan regions, has been implicated in attacks on migrant workers, the Interfax news agency reported, citing an undisclosed source. Russian television network REN TV showed several suspects being detained in a raid on a residence. Weapons, extremist literature and Nazi symbols were seized in the searches, Interfax reported.

Dozens of other Russian cities also held parades for the country's most significant secular holiday.

Russia's ties with the West soured following its annexation of Crimea from Ukraine in 2014, and Moscow has continued to challenge the United States through its staunch support for Syrian President Bashar al-Assad and Venezuela's President Nicolas Maduro.

World leaders have attended in the past, but were conspicuous by their absence on Thursday, something the Kremlin played down.

Among the guests were recently resigned Kazakhstan President Nursultan Nazarbayev and Steven Seagal, the American actor who obtained Russian citizenship in 2016 and later was named a special envoy for humanitarian ties with the United States.

In neighboring Ukraine, which also observes the holiday, outgoing President Petro Poroshenko struck out at Russia.

"For five years, the descendants of the glorious victors over Nazism have defended with arms the freedom of the Ukrainian people and their civilization choice from Russian aggression," Poroshenko said.

Russia annexed Crimea from Ukraine and backs separatist rebels who have been fighting Ukrainian forces in the country's east for the past five years, a conflict that has left over 13,000 dead.