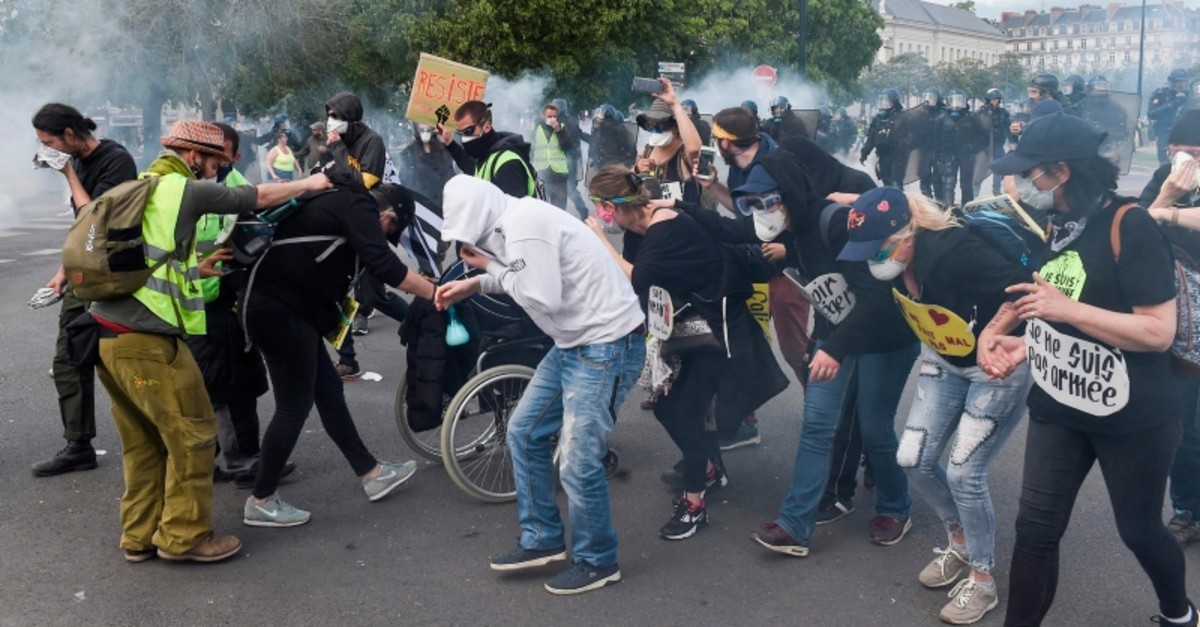 Protestors help a woman in a wheelchair while they try to protect themselves from tear gas during a demonstration called by the Yellow vest (Gilets jaunes) movement on May 11, 2019 in Nantes, western France (AFP Photo)
by May 11, 2019 11:41 pm

"Yellow vest" protesters gathered in Paris and other French cities Saturday for the 26th straight week of rallies against President Emmanuel Macron, with scattered incidents of violence but overall a marked decline in the size of the crowds.

Several hundred people began marching near the Jussieu university in the center of the capital, chosen to show solidarity with teachers who went on strike this week against an education reform project.

"It's going to be a day in support of parents, families and everyone in the education system," Jean-Christophe Valentin, a city hall worker at the rally, told AFP.

With protests outlawed on the Champs-Elysees and a large part of central Paris, organizers had called for "national" rallies in the cities of Lyon and Nantes.

Between 2,000 and 3,000 people turned out in each city, AFP journalists estimated, confirming the decline in attendance since the protests began in November, when it hit a high of 282,000 across France.

The interior ministry said late Saturday that 18,600 people participated in protests across France, including 1,200 in Paris, the lowest level yet recorded for the protests.

The yellow vests, who consistently dispute the official figures, put the turnout at more than 37,000 protesters nationwide.

Tensions flared in Nantes when police charged a group of people throwing rocks and other objects, with at least one person evacuated by "street medics" among the protesters.

Officials had said they had expected up to 500 far-left agitators in the city near France's western Atlantic coast, rekindling fears of fresh violence by so-called "black blocs".

A video reporter for CNews in Nantes was injured after being hit by a rubber bullet while filming the skirmish. "I'm fine because my support belt softened the impact," Stephane Perrier told AFP.

In both Lyon and Nantes, police used tear gas to disperse crowds as some masked protesters attempted to build makeshift barricades.

Police officials said at least 10 officers were injured in the clashes, but the protesters were beginning to disperse towards 6:00 pm (1600 GMT).

The Saturday protests have often been marred by rioting and clashes with police, prompting a crackdown that critics say has led to a disproportionate use of violence by security forces.

Several videos taken by bystanders in recent weeks, including one showing an officer hurling a paving stone toward demonstrators at a May Day rally, have prompted inquiries by police investigators.

"There's a bit of fatigue along with the fear of police violence," said Thierry Boirivant, a 44-year-old accountant who traveled to Paris from the Lyon region.

"And then there's the economic factor: it's expensive to go protest in Paris or other cities," he said.

Initially launched over fuel tax increases, the movement quickly snowballed into a widespread revolt against Macron, accused of ignoring the day-to-day struggles of low earners in small-town and rural France.

Several protesters are planning to run the European Parliament elections later this month, hoping to turn their movement into a sustained political force.

"I'm calling on Europeans to make an anti-Macron vote, even if he just finishes in second place, it would take him down a notch, bring him back down to earth so he can serve us instead of the rich," Jerome Rodrigues said in Lyon.

Rodrigues has emerged as one of the movement's leading figures. He was already well-known among the yellow vests when he was hit by a rubber bullet during one of the January protests and lost an eye.

Yellow vests feature in more than one election list for the European elections, but some of the movement's regulars are suspicious of what they regard as political opportunism, and opinion polls suggest they are not making headway.

In April, Macron unveiled nearly 17 billion euros ($19 billion) in wage boosts and tax cuts for low earners to quell the protests, and vowed to better address voters' grievances after months of town-hall debates.