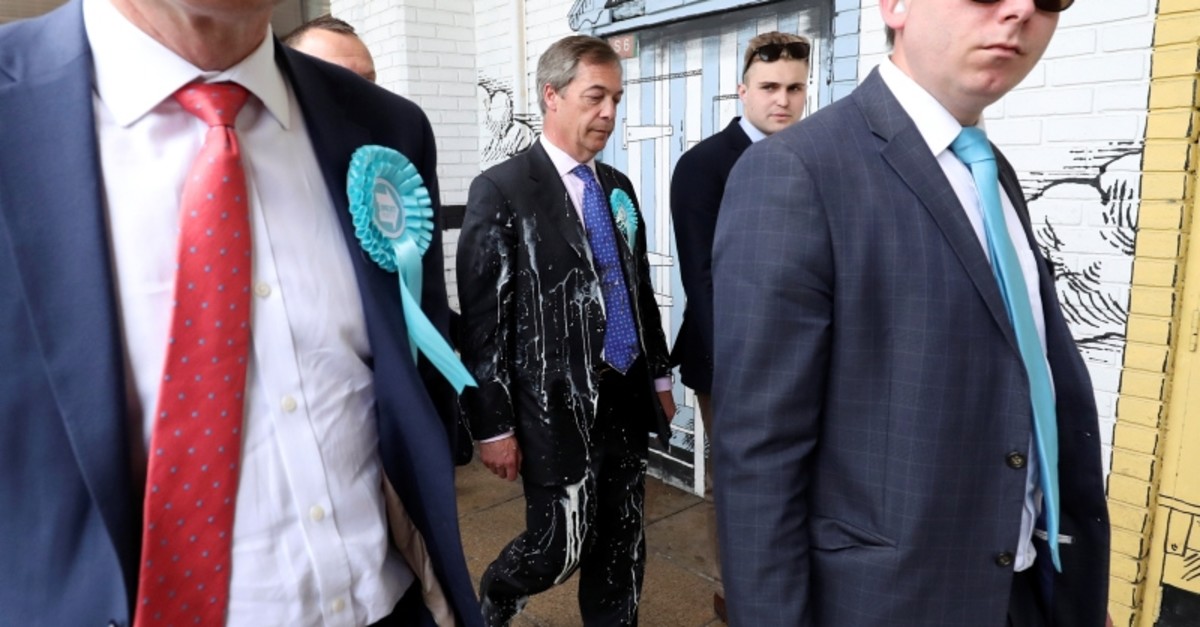 Brexit Party leader Nigel Farage gestures after being hit with a milkshake while arriving for a Brexit Party campaign event in Newcastle, Britain, May 20, 2019. (REUTERS Photo)
by Associated Press May 20, 2019 10:06 pm

Pro-Brexit British politician Nigel Farage was hit with a milkshake while campaigning in the European Parliament election on Monday — the latest in a spate of attacks on politicians with the sticky beverages.

Farage was left with milkshake dripping down his lapels during a walkabout in Newcastle, northeast England. Police said a 32-year-old man was arrested on suspicion of assault.

UK Brexit Party leader Nigel Farage hit with a milkshake during a campaign visit to Newcastle, becoming the latest pro-Brexit British politician to be targeted with the cold beverage in the run up to European elections https://t.co/3jAJzscCFw pic.twitter.com/4MD4f6ayxA

Paul Crowther, who was detained in handcuffs at the scene, said he threw the banana-and-salted caramel Five Guys shake to protest Farage's "bile and racism."

He said he had been looking forward to the milkshake, "but I think it went on a better purpose."

Farage blamed the attack on those who wanted to remain in the EU. He tweeted that "Sadly some remainers have become radicalised, to the extent that normal campaigning is becoming impossible."

Farage's Brexit Party is leading opinion polls in the contest for 73 U.K. seats in the 751-seat European Parliament.

Milkshakes have become an unlikely political weapon in Britain. Other right-wing candidates including far-right activist Tommy Robinson have also been pelted with milkshakes during the election campaign.

Last week a McDonald's in Edinburgh, Scotland said it had been told by police not to sell milkshakes during a Brexit Party rally.