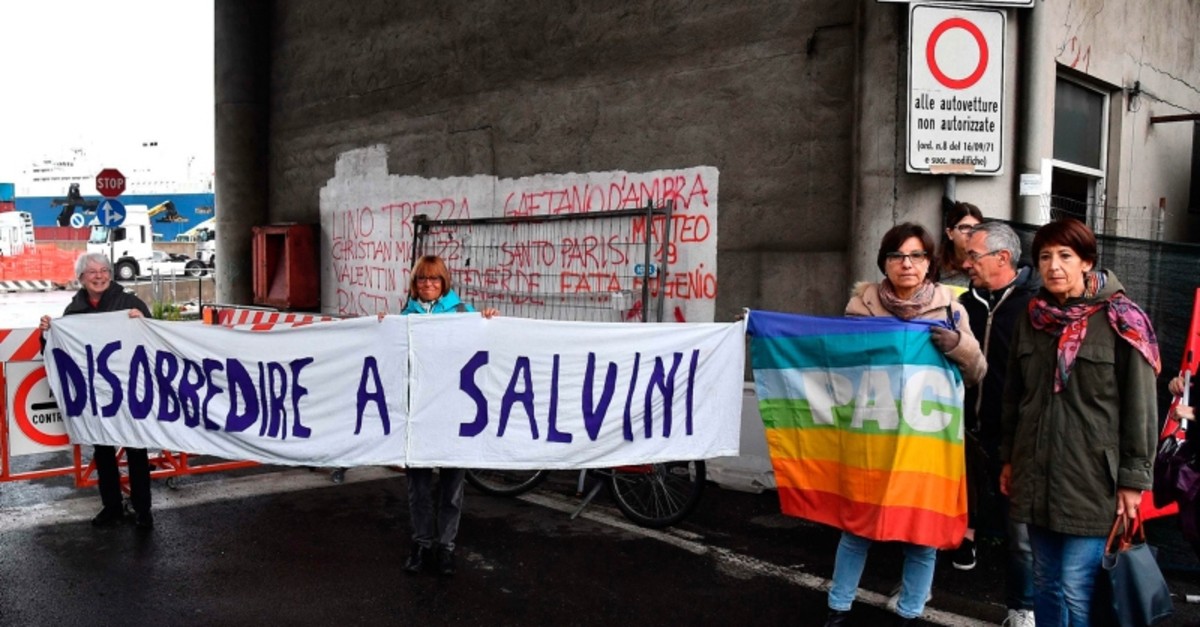 Activists holds up a sign with writing reading in Italian ,Disobey Salvini,as they demonstrate after Saudi Arabian freighter Bahri Yambu docked in Genoa's port, Italy, Monday, May 20, 2019 (AP Photo)
by Daily Sabah with Agencies May 21, 2019 12:02 pm

The workers reportedly went on strike, refusing to work until the ship leaves the port in Genoa.

Rights campaigners say the weapons contravene a U.N. treaty because they might be used against civilians in Yemen.

The Bahri Yanbu cargo has been touring European ports, allegedly picking up arms to be used in the war in Yemen. It arrived in Genoa, in north-west Italy, on Monday, amid protests by dockers.

"We have news that the #BahriYanbu ship will load 8 self-propelled cannons from France at the dock of the Military Arsenal of La Spezia," the Italian Network on Disarmament (RID) tweeted.

According to RID, the cannons were originally due to be loaded at the French port of Le Havre. The ship canceled a stop there on May 10 after protests by local activists.

RID asked Italian Defense Minister Elisabetta Trenta whether she authorized the Bahri Yanbu's move to La Spezia, about 80 kilometers east of Genoa. A ministry spokesman did not reply to a request for comment.

In Genoa, loading operations of generators with possible military use were canceled after protests by a dockers' trade union and other activists, the ANSA news agency said.

Giorgio Beretta, an arms trade expert, told dpa that a move to the military zone of the La Spezia port, where civilians are banned, would avoid any more protests.

Lia Quartapelle, a parliamentarian from the opposition Democratic Party, also tweeted that the Bahri Yanbu would head to La Spezia.

"We will not be complicit in what is happening in Yemen," union leaders said in a statement. Port officials confirmed the generators were blocked on the quay, but said non-critical goods would be loaded.

The four-year conflict in Yemen has devastated the country, leaving much of the population on the brink of famine.

European arms sales to Saudi Arabia are controversial because of widespread suspicions that they are being used to commit atrocities in the Yemeni conflict.