Political parties with similar ideals should come together in the European Parliament elections to stand against far-right parties and eventually defeat them, DENK's leading candidate said

Formed by two parliamentarians with Turkish roots, the Netherlands' DENK party urged other parties in EU countries to join their forces against rising far-right parties on the eve of the European Parliament (EP) elections. "Just like efforts of far-right groups to make alliances, we should come together with other parties in EU countries that think in the same way as us and wage a full-scale struggle against the far-right," Ayhan Tonca, the leading candidate of the party for the EP elections, told Anadolu Agency (AA).

Tonca's statement came following right-wing politicians' recent celebration of their vision. On Saturday, right-wing populist leaders from around Europe celebrated their vision for historic change on the continent at a rally in Milan, aiming to create a pan-European alliance of far-righters seeking to upend EU politics, traditionally dominated by center-right, liberal and center-left parties. It was a major tour de force for the expanding movement ahead of the May 23-26 vote that will take place in all 28 EU nations. 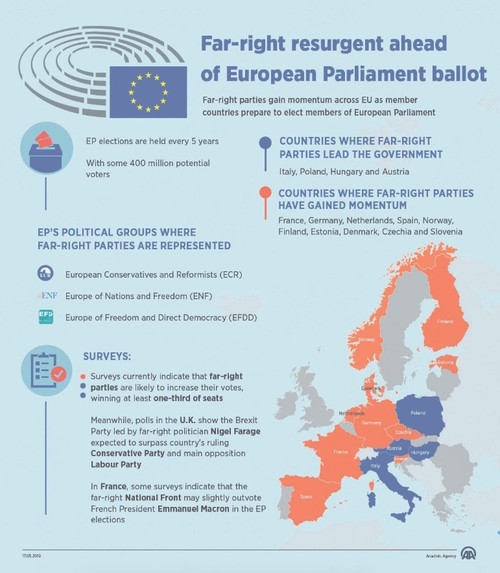 As part of the rally, thousands gathered in front of the city's famous Duomo cathedral, to celebrate the anti-migrant Interior Minister Matteo Salvini, the head of Italy's right-wing League party, and his new alliance of nationalist parties. Those present at the rally included Marine Le Pen, who heads France's National Rally; Dutch populist Geert Wilders; and Joerg Meuthen, leader of the Alternative for Germany (AfD) party.

Tonca said far-right parties want to reconstruct Europe with the ideas of white supremacy, anti-Islam and racism, adding that the common goal of these parties is leaving the EU and impose their own extremist laws. "If the far-right groups would come to the power just as they did in Austria, hard times are ahead for Muslims and minorities," the DENK candidate said. The DENK Party is the first political party in the Netherlands established by migrants, two parliamentarians with Turkish roots, Tunahan Kuzu and Selçuk Öztürk, who left the Labour Party (PvdA) because it inadequately defended the rights of minorities, especially of Muslims and those of Turkish origin.

Emphasizing the importance of immigrant voters' participation in the election, Tonca said with their support, parties such as DENK can send representatives to the EP and stand against extremist movements. "Otherwise, there is no guarantee that what happened in Bosnia would not repeat in Western Europe," he said.

The DENK Party nominated 14 candidates, including three of Turkish descent, for the EP elections. While it already has three deputies in the Dutch Parliament and 33 local representatives in municipalities, the party aims to send two parliamentarians to the EP. During its election campaign, DENK used the slogan "Don't stay silent against racism and cast your vote." Tonca also stressed that far-right ideas have started to turn into action from rhetoric. "Far-right groups organize training camps to take action which shows that they are in a systematic work," he noted. Anti-Muslim hatred has been on the rise for years. Far-right extremism and xenophobia have fueled anti-Muslim hatred in Western countries, where terror attacks by Daesh and al-Qaida are used as an excuse to legitimize those views. Although the enmity toward Muslims is not a new phenomenon, it intensified after 2001 when airplanes crashed into the twin towers in New York City. Since then, for almost two decades, Islam has been unjustly tarnished with labels that have negative connotations and portrayed as a religion of hate and violence with anti-Western sentiment and women's oppression. This trend of intolerance has triggered deadly attacks against Muslims and immigrants since then.

The Netherlands is no different than other Western countries in terms of widespread anti-Muslim sentiments in society.